COVID-19 Vaccines Are Now Being Rolled Out in the U.K. Here's Who Got Them First

A group of British citizens became the first patients to receive Pfizer’s COVID-19 vaccine on Tuesday, as the country began rolling out the first mass vaccination scheme in its history, prioritizing over-80s, care home workers and healthcare staff.

The U.K. became the first western country to authorize the use of a vaccine on Dec. 1. The National Health Service (NHS) in England will roll out vaccinations at 50 hospital hubs this week, and 800,000 doses are expected to be administered in the coming weeks.

Margaret Keenan: ‘The best early birthday present I could wish for.’

Margaret Keenan, who turns 91 next week, was the first to be given the shot, at University Hospital in Coventry, England, at 6.31am on Tuesday morning. “I feel so privileged to be the first person vaccinated against COVID-19,” Keenan said. “It’s the best early birthday present I could wish for because it means I can finally look forward to spending time with my family and friends in the new year after being on my own for most of the year.”

Keenan is originally from Enniskillen in Northern Ireland, and has been self-isolating for most of this year at home in Coventry, where she has lived for sixty years. She will receive a booster shot in 21 days to ensure she has the best chance of being protected against the virus, said NHS England in a statement. Keenan’s shot was administered by nurse May Parsons, who said it was a “huge honor” to play a part in the life-saving day. May, originally from the Philippines has worked in the NHS for the last 24 years.

The second person to receive the vaccine, also at University Hospital, Coventry, was 81-year-old William Shakespeare. Named after the playwright, Shakespeare called the vaccine “ground-breaking” in a television interview Tuesday morning.

The patient’s name provoked a round of good-natured responses on social media, with many offering puns on works by the Bard of Avon:

Race relations campaigner Dr Hari Shukla, 87, said it was a “privilege” to become one of the first people in the U.K. to receive the vaccine on Tuesday morning. “I don’t take this for granted because hundreds of people have worked for this vaccine day and night to make sure we’ve got the vaccines in good time, so the lives of people can be saved,” said Shukla, who was born in Uganda and moved to the U.K. in 1974.

Shukla and his wife Ranjan were the first two patients to receive their shots at the Royal Victoria Infirmary on Tuesday in Newcastle, where Shukla is well-known for his work on racial equality. Shukla said that it was important for him to use his position in the community to show that the vaccine is safe. “I’m saying go for it. It’s very important you have it, it’s wonderful and the way it has been produced, all the work they have done, it’s the best vaccine you could ever have.”

While England is putting senior citizens at the front of the line for vaccines, other regions of the U.K. are prioritizing health care workers. Just after 8am GMT, Sister Joanna Sloan became the first person in Northern Ireland to receive the vaccine at the Royal Victoria Hospital in Belfast. “I’ve been waiting, looking forward to it for so long and it feels great, it feels fantastic, privileged,” said Sloan who will be managing the Belfast Trust vaccination centre. Care home worker Craig Atkins, 48, became one of the first people in Wales to receive the vaccine, a day after Wales reported 2,000 COVID-19 cases in a single day for the first time. Dr Katie Stewart, a consultant anaesthetist at NHS Borders, said she was “delighted” to be one of the first Scottish healthcare workers to receive a vaccination. “After a very long hard year looking after patients with COVID and staying apart to protect each other, we finally have something to celebrate,” Stewart said.

The UK’s Medicines and Healthcare products Regulatory Agency (MHRA) authorized the vaccine produced by Pfizer and BioNTech last week, which was shown to be 95% effective in preventing illness from COVID-19 in clinical trials. The U.K. government has placed orders for 40 million doses of the vaccine — enough for 20 million people, as two separate courses are needed. According to England’s deputy chief medical officer, the first wave of vaccinations could help avoid up to 99% of COVID-19 hospitalizations and deaths. As well as those aged 80 and over and frontline health and social care workers, the vaccination programme over the coming weeks will prioritize residents in care homes and their carers.

The development comes as COVID-19 deaths continue to rise in the country, and cases rise in parts of southern England including Essex, Kent and London. Almost 60,000 people have died after testing positive for COVID-19 so far in the U.K., the highest in Europe and the fifth-highest number in the world.

“This is an incredibly important moment on the march out of this pandemic, but we’ve still got a long march to go this winter,” said Health Secretary Matt Hancock, in response to the first patients receiving their vaccines Tuesday. 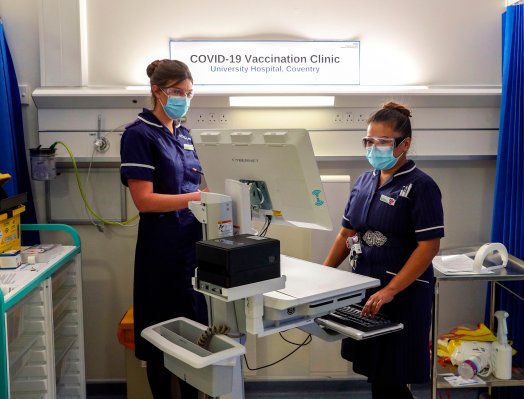 What Happens Next as the COVID-19 Vaccine Rollouts Begin
Next Up: Editor's Pick