Science Delivers the COVID-19 Vaccine. Too Bad Not Enough People Want It

A sign on the entrance to a pharmacy reads "Covid-19 Vaccine Not Yet Available" in Burbank, California, on November 23, 2020.
Robyn Beck — AFP/Getty Images
By Philip Elliott

Coronavirus fatigue is real. Most of us have been cooped-up at home for months, venturing out only as needed for food and supplies. ‘Over it’ doesn’t begin to cover our emotional status right now as the time spent in various degrees of social isolation is inching closer to 300 days. Instead of passing side dishes at Thanksgiving, loved ones passed the FaceTime around the table to say hello. There’s little reason to think this month’s holidays will be much better as we await a vaccine and its widespread distribution. Here in Washington, leaders continue promising a COVID-19 relief package, but have made few tangible steps forward since the last significant bill passed in March.

Against this exhausted backdrop, it’s worth considering the numbers released this week from the non-partisan Pew Research Center. Despite months of cold, hard facts that should have more and more people lining up for a shot — including that this pandemic is airborne, deadly and getting worse — the opposite seems to be true. The number of Americans who steadfastly say they will not get a vaccine has increased since May, the share of the population who plan to get a vaccine has dropped by double-digits and the partisan rejection of science has grown wider.

Even as we now face Sept. 11-level casualties on a daily basis, the Pew survey suggests people have grown numb to our grim reality, or don’t accept the science that the vaccine is the only way out. Back in May, 27% of Americans surveyed by Pew said they would either “probably” or “definitely” not get a COVID-19 vaccine when it comes online. By November, that number surged to 39%. Among the diehards who said they definitely would not participate in a vaccination regime, the number climbed from 11% to 18%. Conversely, the share of the population who said they planned to get the vaccine fell from 72% to 60% over the same time period. Republicans and Democrats alike have seen a fall-off in interest, although Republicans had a 15-point dip to Democrats’ 10-point fade.

This disturbing trend didn’t happen in a vacuum. Overall, Americans get vaccinated at high rates, but vaccine hesitancy has been a movement among some groups, for religious and other reasons, for years, pulling down vaccination rates and helping contribute in 2019 to the worst measles outbreak in the country in almost three decades.

The collision of politics and science this year has resulted in some muddled messages at a time the public has needed to hear a consistent, fact-based set of orders. For months, President Donald Trump has sought to downplay the severity of the virus — even after he contracted it, was airlifted to Walter Reed from the White House lawn and returned to packed, indoor campaign rallies. Exit polls indicate a full 30% of voters believed wearing a mask is a personal choice and not a public-health issue, and Trump carried them by a 3-to-1 margin. At the same time, Vice President-elect Kamala Harris said during the campaign that she would not take the vaccine if Trump alone were vouching for its safety. In an interview this week, Harris said she would be vaccinated when the injections are safe. And New York Gov. Andrew Cuomo has also questioned the federal approval process under Trump, saying New York would undertake its own review of the vaccine.

Leadership, for lack of a better term, matters. This week, former Presidents Barack Obama, George W. Bush and Bill Clinton all said they would be vaccinated on-camera to build public confidence. Untold hours of vaccine public-service announcements should be in production, if they aren’t on a shelf already. Celebrities, athletes, public officials — every single one of them needs to abuse their bully pulpits right now to turn these numbers around.

If America is to get through this pandemic, widespread buy-in for getting vaccinated is required. The Mayo Clinic estimates 94% of the population needs immunity, either through antibodies or vaccines, in order to stop the chain of transmission of the virus. We are never going to get there without a shift in public opinion. Hundreds of millions of people would have to contract the virus to develop herd immunity without a vaccine, an untold number of people would needlessly die, and experts suggest the U.S. may never stop the virus with a wait-and-see approach.

Back in May, as more people told Pew they would consider a vaccine, the United States was logging fewer than 24,000 new cases. Last month, when more people told the survey they would not, the U.S. new-case number was over 136,000. As the virus spreads farther, and exacts a heavier toll, public interest in a vaccine has shrunk. When scientists say that we don’t fully understand this pandemic’s legacy, you can’t ignore what it has already done to our rationality. 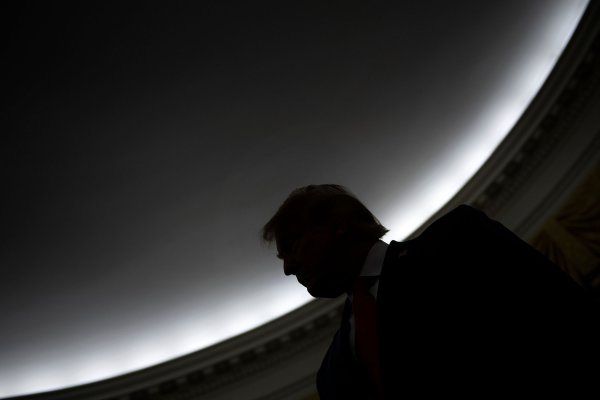 Republicans Have a Georgia Problem
Next Up: Editor's Pick