India’s LGBT community is calling on members to come together during national elections to try to defeat the opposition Bharatiya Janata Party (BJP). LGBT activists say the Hindu nationalist party, which is expected to give a strong performance in the polls, has failed to take a clear position on LGBT rights, while some of its members have made statements openly denouncing homosexuality. “In the absence of any clarification from the party, we will assume that they are not supporting gay rights,” says Shaleen Rakesh, a gay rights activist and director of the India HIV/AIDS Alliance.

Gay rights in India came into the national spotlight in December, when the Supreme Court upheld Section 377 of the Indian penal code, which criminalizes gay sex. The colonial law had been ruled unconstitutional by the New Delhi High Court in 2009 in a decision that was celebrated by human rights groups worldwide. But last year the apex court overturned the ruling, reinstating the law and effectively passing the buck to Parliament to decide on its constitutionality.

The decision came as a shock to many in India, and prompted several politicians to take a firm stand on the issue. Congress president Sonia Gandhi said in a statement: “I hope that Parliament will address this issue and uphold the constitutional guarantee of life and liberty to all citizens of India, including those directly affected by this judgment.” The government submitted a review petition to the court to reconsider the ruling, which was later dismissed.

The BJP, meanwhile, came out in favor of the court’s decision, with a spokesman saying that “we can’t bring western culture into our society and culture,” according to local reports.

BJP spokesperson Nirmala Sitharaman says the party’s official stance has been supportive of the Supreme Court ruling, as it put the onus on parliament to debate the law. “The BJP position has been that the legislators were the ones who would work on this,” she says. “If there is a law to be made, we’ll participate.” As to why LGBT rights were not included in the party manifesto, Sitharaman says the issue needs further debate: “there has to be a lot of deliberation before a decision is taken.”

For activists, the judgment did have one silver lining: timing. Because it came shortly before election campaigns kicked off, several political parties have taken clearer positions on gay rights then, perhaps, they otherwise might have. Congress, which has led the government since 2004 and faces a tough fight these elections, has come out in support of gay rights, as has the anti-corruption Aam Aadmi Party and the Communist Party of India (CPM). “The BJP is actually the odd one out,” Rakesh says. Shaina NC, a BJP leader, told the Times of India: “We have not discussed the issue as a party. When we do so after elections, I believe a younger generation of BJP workers will actively debate the merits of the issue.”

In the meantime, LGBT activists are banding together to choose candidates from secular parties that stand in opposition to the BJP. With the opposition party favored to form a next government, the action may be a fruitless one, but it’s part of a longer battle. If the BJP wins, it’s not over for gay rights in India, says Rakesh. “The community is not going to rush back into the closet because they are afraid. The opposition will continue.” 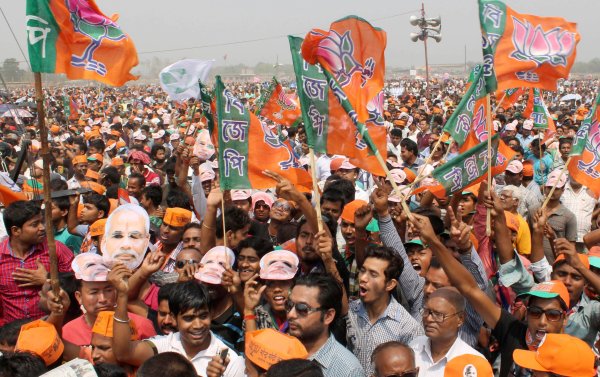 Indians To Spend $5 Billion On Poll Campaign
Next Up: Editor's Pick