Supporters of President-Elect Joe Biden stand in front of the Michigan State Capital as the Michigan Board of State Canvassers vote today to certify the 2020 election in Lansing, Mich. on Nov. 23, 2020.
Jeff Kowalsky—AFP/Getty Images
By Madeleine Carlisle

Both Michigan and Pennsylvania have certified their states’ results for President-Elect Joe Biden, throwing major roadblocks in front of President Donald Trump’s ongoing effort to challenge the results of the 2020 election. While the President has still not conceded, his government’s administrator of the General Services Administration announced Monday that she will authorize a formal transition process.

On Tuesday, Pennsylvania Secretary of State Kathy Boockvar announced she had certified the results of the Nov. 3 election, declaring Biden the winner with a lead of more than 80,000 votes. All 67 of Pennsylvania’s county Board of Elections had certified their results and sent them to Boockvar by Monday night.

“As John Adams once said, ‘We are a government of laws, not men,’” said Van Langevelde before he cast his vote. “This board needs to adhere to that principle here today and comply with our legal duty to certify this election.”

Several other key swing states that delivered Biden his victory—including Wisconsin, Nevada, and Arizona—are scheduled to certify their counts in the next week, which will further narrow Trump’s path to fight the results. Certification works differently in each state, but with the same intention: to conduct an official review of results before sending a slate of electors who will then cast their votes in the Electoral College on Dec. 14.

In Nevada, the state Supreme Court is expected to meet on Tuesday to certify its results, after which the Governor declares the winner. In Arizona, county Board of Supervisors were required to complete their canvass by Monday and send results to Arizona Secretary of State Katie Hobbs, who must certify the official count by Nov. 30. In Wisconsin, counties have already affirmed their results and sent them to the Wisconsin Elections Commission, which is required to certify the official count by Dec. 1. (The Trump campaign has requested a partial recount in Wisconsin, but experts don’t expect it to significantly impact Biden’s lead.) Georgia certified its results on Friday, one day after a federal judge rejected a lawsuit from a Trump ally attempting to delay certification.

Trump has repeatedly used the power of his office to claim, without evidence, that the election was stolen from him, and has pressured Republican officials to undermine Biden’s win, including by stalling certification processes. On Nov. 20, the President hosted two senior Republicans in the Michigan state legislature at the White House, raising alarms that he would push them to embrace a far-fetched legal avenue allowing Republican state legislatures in states where Biden won the popular vote to nominate competing slates of Trump-pledged electors.

After the White House meeting, the Republicans—state Senate Majority Leader Mike Shirkey and state House Speaker Lee Chatfield—issued a join statement saying that they “have not yet been made aware of any information that would change the outcome of the election in Michigan” and plan to “follow the law and follow the normal process regarding Michigan’s electors.”

In Pennsylvania, results are certified by 67 county Board of Elections, which are made up of three members from each county commission: two from the majority party and one from the minority. The partisan split depends on the makeup of the county commission itself. (Philadelphia has three elected City Commissioners, but with a similar two-to-one partisan split.) Of the five largest counties in the state—Philadelphia, Allegheny, Montgomery, Bucks and Delaware—all have Board of Elections with Democratic majorities.

The Philadelphia Inquirer reported that on Monday, Boards of Elections in Montgomery, Allegheny and Luzerne counties split their votes to certify along partisan lines, and “baseless conspiracy theories” were brought up at several other public hearings. But, in the end, every county Board of Election voted to certify its results, clearing the path for the Secretary of State to do so shortly thereafter.

Nearly all of the Trump campaign’s legal challenges to Pennsylvania’s election results have failed so far. On Monday, Pennsylvania’s Supreme Court rejected a Trump campaign lawsuit requesting that certain absentee ballots in Philadelphia and Allegheny county not be counted, allowing both counties to certify those votes. And on Saturday, a federal judge dismissed a suit attempting to delay the state’s certification, which the campaign is appealing. In his decision, Judge Matthew Brann wrote the campaign had presented “strained legal arguments without merit and speculative accusations, unpled in the operative complaint and unsupported by evidence.”

“In the United States of America, this cannot justify the disenfranchisement of a single voter, let alone all the voters of its sixth most populated state,” Brann continued. “Our people, laws, and institutions demand more.” After the ruling, retiring Republican Pennsylvania Sen. Pat Toomey called on Trump to accept the election results, saying he had “exhausted all plausible legal options to challenge the result of the presidential race in Pennsylvania.”

All fifty states are expected to finalize their slates of electors by Dec. 8, which is known as the “safe harbor” deadline. On Dec. 14, electors are then expected to meet and cast their ballots in the Electoral College, the results of which Congress will count on Jan. 6. 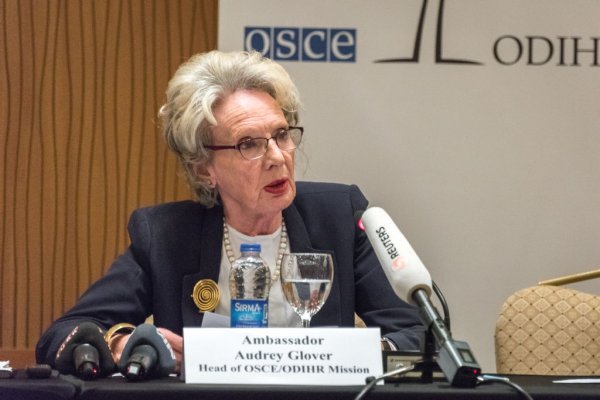 Top Poll Monitor Is an Optimist About Future U.S. Elections
Next Up: Editor's Pick