More than anyone in the Cabinet or elsewhere on the West Wing seating chart, one figure above everyone else will determine the success of the incoming Biden Administration: Sen. Mitch McConnell.

The Republican Leader is a master of Washington’s levers of powers. Whether he remains the Majority Leader by winning one of the two ongoing races in Georgia or whether he retreats to Minority Leader if Democrats can win both Peach State playoffs, McConnell will still have enormous sway over what unfolds in Washington. Obviously, should Republicans hold onto the majority, he alone can set the schedule of the Senate and turn the entire Biden agenda into a morgue of proposals. But if Democrats win the majority — and barring a serious break with Senate rules to scrap the procedural filibuster — McConnell can still gum up action by withholding consent.

That’s why all eyes are on the relationship between McConnell and Biden, two septuagenarians who know their way around the Senate and its arcane rules. Each leads a party whose base is far more animated than he is inclined to be. McConnell is deeply conservative, but not prone to the theatrics of the Donald Trump-era GOP. Likewise, Biden overcame skepticism from his party’s left flank by simply arguing — and proving — he was the most-electable Democrat on the field. Both men will start 2021 on defense: McConnell’s party will be defending 20 Senate seats the following year, and Biden knows first-term Presidents seldom do well in their first midterms.

Even in his victory speech, Biden paid heed to the looming negotiations and warned his most-liberal supporters that they may not get their wish lists. “I believe that this is part of the mandate given to us from the American people,” Biden said in Wilmington, Del. “They want us to cooperate in their interest.”

There are reasons to see the contours of compromise on the horizon. After all, McConnell used Biden as a back-channel to the Obama White House for eight years. When things got tough, President Barack Obama often sent Biden to his ceremonial offices at the Capitol to figure out a deal, especially when it came to government funding. Republicans on the Hill despised Obama but saw Biden as one of them. “There is a reason ‘Get Joe on the phone’ is shorthand for ‘Time to get serious’ in my office,” McConnell said in 2016.

Biden understood when to show deference to McConnell, who knows — as he did then — how to keep his caucus in line. Biden seldom tried to snipe any stray Senators through lobbying, which made negotiations between the pair efficient, if impersonal. In return, McConnell knew the power of gestures. During Biden’s final days as Vice President, McConnell passed a $6.3 billion cancer-research bill and renamed it after Biden’s late son, Beau Biden.

McConnell was upfront about his desire to make Obama a one-term President; there’s little reason to believe he’d like to see Biden be a two-termer. To this point, McConnell has yet to acknowledge Biden’s victory, instead paying fealty to Trump’s chase of long-shot legal challenges so as not to poke Trump’s MAGA base. Shame, after all, isn’t really McConnell’s thing. He had no hesitation in denying Obama’s third nominee to the Supreme Court a hearing, let alone a vote. As a result, that nomination passed to Trump in 2017, part of McConnell’s long-standing desire to reshape the federal benches for a generation.

The first test facing the duo will be another round of coronavirus relief. McConnell has dug in so far and refused to budge on negotiations, which he has now taken over from Treasury Secretary Steve Mnuchin. House Democrats initially sought $3.5 trillion but came down to $2.4 trillion; McConnell is more comfortable with about $650 billion. Biden has said he likes House Democrats’ plan, although anything is possible.

Further down the line, it’s not too farfetched to imagine some level of compromise on an infrastructure package, a clean-energy proposal, criminal-justice reform and — now that the House is no longer under control of the Freedom Caucus — an immigration overhaul that passed the Senate in 2013 but fell flat on the other side of the Capitol. Any Senate where McConnell holds even a shred of power is likely to reject Biden’s proposed tax increases on corporations and the super-wealthy, but it’s not impossible to imagine some compromise on smaller-ticket changes to the tax code.

But don’t break out the fancy pens for White House signing ceremonies just yet. Obama himself scoffed at the prospect of a Biden-McConnell collaboration. In an interview with The Atlantic to promote the first volume of his presidential memoirs, Obama seemed to mock the optimism about the idea in Washington right now.

“Mitch McConnell is not buddy-buddy with anyone. I’m enjoying reading now about how Joe Biden and Mitch have been friends for a long time,” Obama said before making a distinction between friendship and familiarity. “They’ve known each other for a long time.” Biden may not fully appreciate the difference, but McConnell sure does. 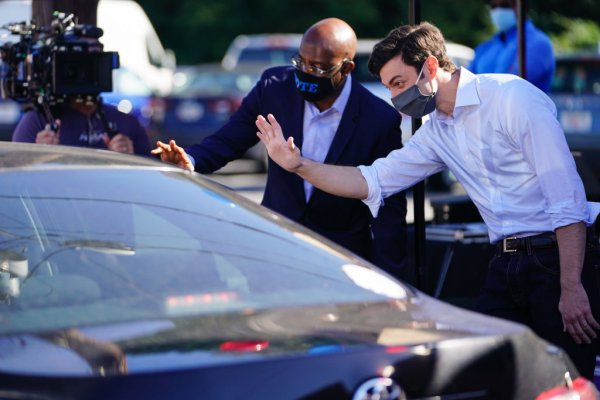 How Georgia’s Senate Races Could Boost the State Economy
Next Up: Editor's Pick