Trump Made the Economy His Message. Biden Won It

President Donald Trump ran on his stewardship of the U.S. economy before the coronavirus pandemic hobbled almost every corner of the American marketplace and his promise to bring it back to life. As it turns out, the areas that fared the best under Trump in the pre-pandemic years and were then hit the worst during the pandemic ended up voting for Joe Biden.

The findings, coming from a Brookings Institution study and an Economic Innovation Group analysis, suggest that the Trump campaign’s perceived ace-in-the-hole turned out to be a dud. Biden carried counties that make up 70% of the nation’s economy, according to Brookings. The separate study from EIG found those same counties beat the national averages for employment, wages and the number of new businesses from February 2018 to February 2020, right before the pandemic tanked the economy. Then, according to EIG, they got hit harder than Trump Country.

In other words, the corners of America that gave Joe Biden the win are the economic backbone of the country, were disproportionately slammed by the pandemic and seemingly were untrusting of Trump with a do-over.

It’s no accident that the counties that delivered the White House to Biden are urban centers with white-collar economies fueled by an electorate that is non-white and with better educations. In turn, they have massive ownership of the G.D.P. Conversely, Trump’s base was largely white voters without college degrees living in economically less-significant places. For instance, the biggest county to go to Trump was New York’s Nassau County, which is sizable but hard-stretched to compete with places like Los Angeles, Chicago and New York City, which all went to Biden. Trump won five times as many counties as Biden; they were just economically less important.

Economic strength is inextricably linked to population size. Biden won 477 dense counties that comprise 70% of the nation’s economy, to Trump’s 2,497 rural counties that account for just 29%. (We’re still waiting for about 110 counties’ results, so these numbers are going to shift a little.) By flipping Maricopa County in Arizona and Tarrant County in Texas, Biden even expanded his share of the G.D.P. by county vote from Hillary Clinton’s 64% four years ago. Put another way: Biden won The Makers. Anyone who remembers Mitt Romney’s Makers-versus-Takers gaffe from 2012 will seize up a bit here.

Exit polls indicated a country evenly divided on the state of the economy, with Trump’s supporters seeing it as excellent or good and Biden’s backers seeing it as not good or poor. A full quarter of the electorate said they were casting their ballot not in affirmation of their choice but as a vote against the other guy. By a 2-to-1 margin, these were voters who picked Biden.

Which brings us to the economic fallout itself. A second EGI analysis, which compared unemployment rates in August of 2019 through August of this year, shows these same economic powerhouse counties that went to Biden were hit harder than Trump Country. Biden-backing counties saw a 4-percentage-point increase in unemployment during the last year, while Trump areas climbed by a smaller 2.4 percentage points.

For months, it’s been clear that Democratic-leaning areas’ economies have been harder hit during the pandemic than those tilting to the GOP. If that doesn’t make sense at first, consider this: Broadway and Hollywood are shut down, but construction and manufacturing are not. Tourism-reliant places like Las Vegas, Orlando and Honolulu are still operating, but with seriously reduced crowds. Those are all reliably deep-blue locales, and voters decided against giving Trump another chance to dig them out.

That Biden won the economic centers of America isn’t, in itself, a shock. But the degree to which he surpassed Clinton’s showing from four years ago speaks to the shaken confidence in the spine of America’s economy. Trump is on course to be the first President since the government started measuring jobs to leave office in the negative column. His smooth words simply weren’t enough to convince even the parts of the economy hit hardest to give him four more years. 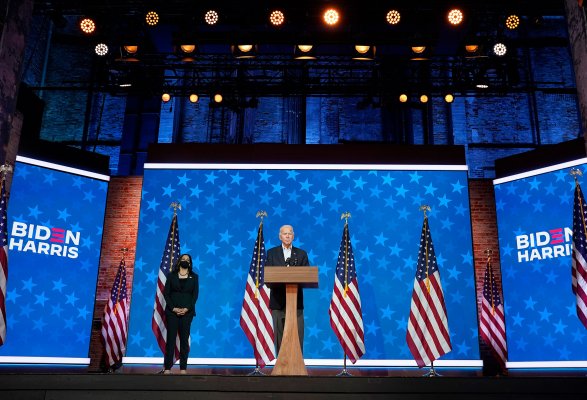 Why Biden Still Lost Many Obama-Trump Voters
Next Up: Editor's Pick