A medic from Houston’s fire department gives a patient oxygen before taking him to the hospital on Aug. 14
John Moore—Getty Images
By Abigail Abrams

Democrats had high hopes for health care. After winning big on the issue in the 2018 midterms, Democrats swaggered into 2020 convinced they had a mandate to transform the industry. The only question was how best to do it. In the Democratic primary, Joe Biden’s plan to add a government-run “public option” for health insurance to the Affordable Care Act (ACA) emerged as the moderate alternative to the left’s dream of Medicare for All.

But the party’s big plans may already be in jeopardy. One problem is the challenge of a divided Senate. Even if Democrats win the January runoff for both Georgia Senate seats, the chamber will likely be split 50-50. This would give Vice President–elect Kamala Harris the tie-breaking vote, but Biden would still need to negotiate with moderate members of his own caucus to pass ambitious reforms. Another problem is the U.S. Supreme Court, now populated with three Trump-appointed Justices, which heard the latest constitutional challenge to the ACA on Nov. 10. If the court strikes down the law next year, the decision could throw more than 20 million off their insurance and put the Biden Administration in the unenviable position of attempting to pass a new health care law from scratch.

So that’s the bad news. But Democrats also have reason to be hopeful, experts say. One reason, counterintuitively, may be the ongoing COVID-19 pandemic, which has killed roughly 240,000 Americans and laid waste to tens of millions of jobs. In doing so, it has efficiently, if morbidly, illustrated the long-standing progressive argument for why access to health care should not be tied to employment. An estimated 12 million people lost health insurance through their employer or that of a family member this year when those jobs disappeared, and the roughly 30 million more Americans who already lacked coverage worried about what would become of their finances if they caught the virus and had to be hospitalized. Jacob Hacker, a political scientist at Yale University says that “people are much more receptive toward significant reforms” during major crises.

Biden must act quickly, says Daniel Dawes, a health care lawyer who worked with the Obama Administration to develop the ACA. “If they wait too long,” he warns, “they lose that honeymoon period.” In a speech on Nov. 10, President-elect Biden appeared to be laying the groundwork for bipartisan cooperation to fix the ACA. “This doesn’t need to be a partisan issue. It’s a human issue,” he said. “It affects every single American family.”

Other improvements may not require big fights in Congress, experts say. Some think Biden could use emergency powers to temporarily boost subsidies to help families afford marketplace plans. Democrats could also focus on issues with bipartisan appeal, like lowering prescription-drug prices or outlawing the practice of “surprise” medical billing, which is when patients are unexpectedly charged for out-of-network care.

Then there are steps that a President Biden could take without wrangling Congress, by using Executive powers. He could reopen ACA enrollment and restore the federal funding to help families sign up for coverage that President Trump slashed. He could roll back Trump’s expansion of skimpy health insurance plans that don’t comply with the ACA, rescind Trump’s restrictions on access to birth control and eliminate the “public charge” rule that deterred immigrants from accessing benefits.

Dr. Kavita Patel, a Brookings Institution fellow who worked on health reform in the Obama Administration, says Biden could also ease access to Medicaid and use federal money to incentivize the 12 states that have not yet expanded Medicaid to do so. The offer may be particularly enticing during the pandemic, as many states face large budget shortfalls. Dawes, who has advised Biden on combatting racism in health care, says he expects the new Administration to improve data collection on how COVID-19 and other health issues affect minority populations and to address maternal mortality, a top focus for Harris. Such improvements may not usher in the fundamental transformation of the U.S. health care system that Democrats have yearned for. But it’s a start. 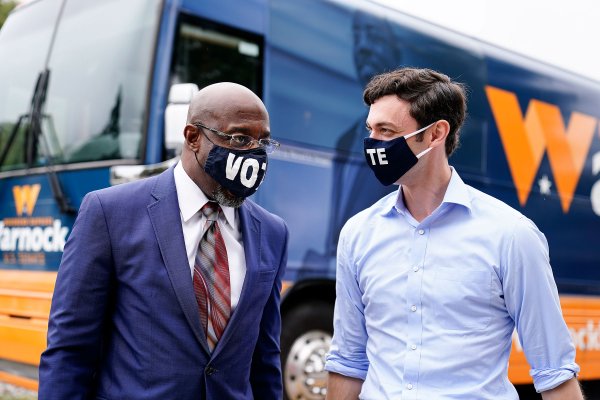 Georgia’s Runoffs Are About More Than Senate Power
Next Up: Editor's Pick