President Donald Trump has made few public appearances since falsely declaring he won the election several hours after the polls closed. Behind the scenes, Trump has been shoring up Republican support for his refusal to concede and doubling down on launching dubious legal challenges to the results. He’s employed government bodies to bolster the effort, and is raising money to build a new war chest that would let him direct funds to Republicans he wants to support going forward.

A person who speaks to Trump frequently said he believes Trump’s fight, as disruptive as it is, is a way for him to posture for what comes next. If Trump doesn’t prevail in his legal challenges and leaves office, as many aides are anticipating, Trump can use a new leadership political action committee (leadership PAC) to fund candidates of his choosing and potentially pay for political travel and events he might want to do after leaving office—or launch a 2024 presidential campaign, says the person close to Trump.

In addition to fundraising with an eye toward staying politically relevant after leaving office, some current and former aides believe Trump could try to launch himself back into the media world, either through a broadcasting deal with a news outlet or bringing investors together to start his own media company. So far, Trump hasn’t made overt approaches to his Fox News allies like Sean Hannity and Laura Ingraham about working together on building a media company, the person said, because Trump is still in fight mode, and any whiff of him making moves in that direction would indicate he had given up.

After his initial ratings success at the Apprentice, Trump has privately floated the idea to friends of building his own media enterprise for years, a concept people around him refer to as “Trump TV.” Brad Parscale, Trump’s former campaign manager who was fired in July, spent more than four years working closely with Trump and his family members, particularly Eric Trump and Jared Kushner. He believes that if Trump ends up leaving the White House, he won’t exit the public eye. “He can literally do anything he wants,” Parscale says. “He’s loved by millions of people.”

In the meantime, his campaign’s email and text message spam lists have been going full bore to raising money to pay off the more than $1.2 million in campaign debts that was already on the books three weeks before Election Day. That debt likely ballooned in the final weeks of the campaign as Trump’s fundraising haul trailed Biden’s and his campaign tried to fend off being swamped by Biden television ads, says Republican pollster Frank Luntz. In addition, Luntz adds, “he needs money to fight these court cases.”

In the 48 hours after Biden was projected to have won the presidency, the Trump campaign sent more than 53 versions of emails to supporters asking them to donate to his legal defense fund. The barrage of fundraising emails to donate to his legal battles have come under the names of Trump himself, Donald Trump Jr., Eric Trump, Lara Trump, Vice President Mike Pence, RNC Chair Ronna McDaniel, the “Election Defense Task Force,” “TRUMP TRUMP TRUMP,” and the “Trump Election Defense Fund.”

According to the fine print at the bottom of the emails soliciting donations, not all the money contributed by supporters will go towards litigation efforts to ensure election integrity and “counting all legal ballots.” Instead, at least half of the funds contributed by each supporter to some solicitations goes towards paying off the Trump campaign’s debts. One of the websites the fundraising emails link to, set up by the “Trump Make America Great Again Committee,” notes at the bottom that 40% of the donations made through the site will go to the Republican National Committee and the rest will go towards Trump’s campaign debt. On Tuesday the disclosures in some Trump fundraising emails said that as much as 60% raised would go to Save America, a new leadership PAC set up to support Trump.

The fundraising emails seem to have been hastily put together, wavering between cajoling and bullying supporters into chipping in. Some tried to appeal gently to supporters with subject lines like “Everything we’ve worked for” and “We’ve come so far.” Another took a different tack, warning: “This is your FINAL NOTICE. So far, you’ve ignored all our emails asking you to join us in DEFENDING THE ELECTION. You’ve ignored Team Trump, Eric, Lara, Don, the Vice President AND you’ve even ignored the President of the United States.”

During a conference call with high-profile supporters on Saturday, Trump’s campaign manager Bill Stepien said he was getting a lot of calls asking how people can help. One way to help, Stepien said, was “to contribute to the legal defense fund. You can go to donaldtrump.com and make sure the funds are available. You can certainly do that. This is not a fundraising solicitation, but it is an avenue to help,” he said. Stepien also gave out a phone number he called a “hotline” for reporting instances of election fraud, and told the people on the call to “stand at the ready” because “we may need your help at protests.”

Trump’s active undermining of the election results has real world consequences. His head of the General Services Administration has failed to allow Biden’s transition teams to enter agencies to prepare for taking over on Jan. 20, and his Attorney General William Barr told prosecutors to investigate allegations of voting irregularities before results are certified, ignoring 40 years of precedent to not interfere during an election and prompting the department’s top elections prosecutor to resign.

He’s lined up GOP politicians in Georgia to back his claims, even though their own elections rest on the integrity of those results. Trump has been laying groundwork for months to undermine trust in the electoral process with false and unfounded claims about wide-spread voter fraud, and there are concerns that a large number of Republicans may never believe the outcome. Seventy percent of Republicans don’t believe the election was free and fair, according to a POLITICO/Morning Consult poll.

Republican pollster Luntz argues that allowing the legal challenges and the counts to play out could eventually help allay concerns among some Republican voters that the election wasn’t fair. “They’re not going to find anything. He lost. Just let the process work,” Luntz says.

Trump was at his golf club in Virginia on Saturday, the day AP projected he had lost to Biden, and Trump returned to the links on Sunday, during an unseasonably warm November day. At the golf club, the person familiar with his mood on Sunday said, “he was very calm, very calm, no panic, no stress.”

—With reporting by Alana Abramson and Vera Bergengruen 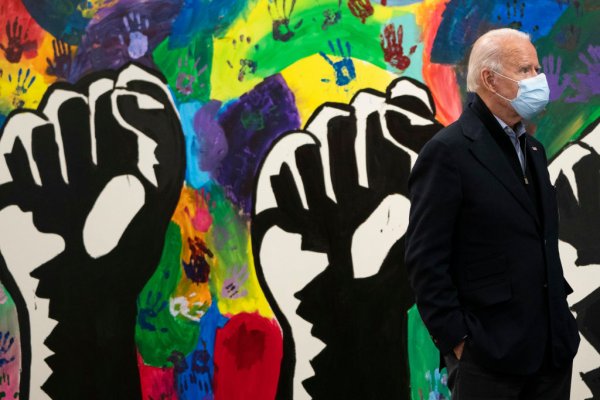 How Youth of Color Backed Biden in Battleground States
Next Up: Editor's Pick