Miho Watanabe rejoices with fellow manager Junko Kotani at the opening of their grocery store in Tamura, Fukushima prefecture, the first shop to open since the nuclear disaster in 2011 forced the village to evacuate
Per Liljas
By Per Liljas

A few days after residents were first allowed to move back to the Fukushima village of Tamura, Miho Watanabe was finally able to lay on a cheery welcome. The co-manager of a government-built grocery store, she hung up flower displays and colorful banners. Inside, refrigerators hummed, pop music played and the bar code scanner beeped merrily as visitors raided the three short but well-stocked aisles.

“It’s been extremely hectic to put everything in place,” she beamed in her white uniform. “But the smiles on the customers’ faces make me happier than I’ve ever felt in my life.”

Despite the outward brio, things aren’t so simple. Wary of lingering contamination from the 2011 disaster at the nearby Daiichi nuclear power plant—as well as the lack of job opportunities and amenities—half of the former residents have simply ignored the official all-clear, which was issued on April 1.

On a national level, too, there is a lack of consensus. Produce from Fukushima, even from villages unconnected to the disaster, does not inspire confidence among consumers despite official O.K.s. And nobody can agree on the future of Japan’s nuclear-energy sector.

In the aftermath of the Fukushima disaster, the country’s 48 reactors were shut down and the energy they generated replaced by imported fossil fuels, which have burned a deep hole in national coffers over the past three years and damaged the country’s competitiveness. A sharp drop in Tokyo’s stock market on Friday put the Nikkei Stock Average on track for its worst week in three years.

Though his predecessor wanted to phase out nuclear power, Prime Minister Shinzo Abe sees it as crucial if the world’s third largest economy is to be steadied. On Friday, his Cabinet approved an energy strategy that reinforced the future role of nuclear energy, despite significant opposition from the general population.

“They want to restart the reactors because of money, but it’s irresponsible, Japan is too unsafe to have nuclear power,” says activist Kaori Echigo, before taking to a podium in front of the parliament building in Tokyo and leading a crowd in the chanting of anti-nuclear slogans. The crowd at these gatherings, which have been held weekly since the disaster, has dwindled to a few hundred. But the last time a reactor was restarted, in 2012, thousands came onto the streets—as they are likely to do again if Abe goes ahead with his plan.

A poll by the Tokyo Shimbun newspaper last month found that 69% of respondents wanted nuclear power to be phased out. That number could rise even higher if Japan makes it through another summer without blackouts. Coping with the peak season for electricity consumption without incident would suggest that fossil fuels, though costly, are doing their job.

Even in once staunch pro-nuclear strongholds like Tamura, which thrived on employment from the now shuttered Daiichi plant, there are mixed views. Kenichi Matsumoto, who runs the local tobacco store, remembers the good times. When the plant was built, he says, “there were jobs, a school was opened. Before, the village had only one bike. Now we drive cars.” And he says marrying somebody from Tamura was seen locally as a stroke of luck because the Tamura villagers invariably made prosperous partners.

But when Watanabe, at the newly opened grocery store, is asked about the future the smile on her face fades.

“We still talk a lot about the radiation risk,” she says. “It’s better around the houses, but still bad in the forest and among the hills.”

Spread out through the village are fields covered with black plastic bags, each one filled with contaminated topsoil that has been collected from the surroundings. Watanabe says she feels life is coming back to Tamura when she sees children in the streets, but then remembers that they are only allowed half an hour’s outdoor playtime per day because of radiation fears. 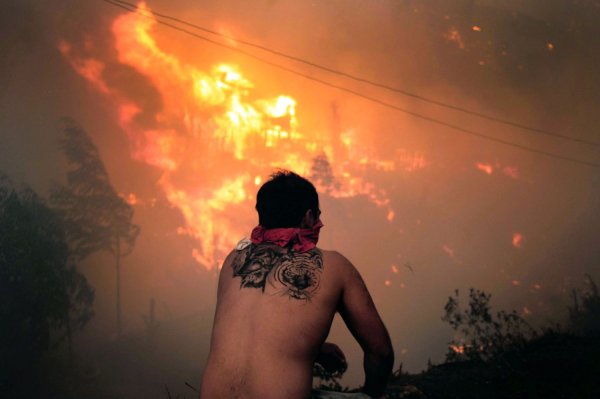 11 Dead in Chile Forest Fire
Next Up: Editor's Pick