As Joe Biden stood on stage on Saturday night and watched the drones dance overhead, spelling out B-I-D-E-N and P-R-E-S-I-D-E-N-T E-L-E-C-T, a different kind of tango was taking place here in Washington. A political appointee answerable to President Donald Trump appeared unwilling to give the next commander-in-chief the keys to basic office space as required by law.

The General Services Administration is the federal government’s de facto real-estate firm. It provides incoming administrations with the basics — like office space and computers — to make the transition between election results and Inauguration Day as easy as possible. But the current head of the GSA, a former senior aide on Capitol Hill who was appointed by Trump, has said she has not seen any certification outside of the media that Biden won, thus she has no obligation to contradict her boss, who says he has. GSA aides say they are merely following precedent set in 2000, when there was a dispute and a recount.

That means the Biden team could be without a physical base in the capital until the Electoral College votes on Dec. 14. More importantly, it suggests that staffers in the Trump Administration may not start talking to their successors until every last effort can be made by Trump to stay in power through litigation. So far, most Republicans seem unwilling to openly break with Trump and acknowledge that their former Senate colleague and the former Vice President has prevailed. Although Trump is going to be a one-term President, he still amassed 70 million votes, making him a powerful voice inside the GOP for the rest of his days.

It’s all exactly what Biden transition chairman Ted Kaufman had hoped to head off. As Biden’s longtime chief of staff, temporary replacement in the Senate and now very senior adviser, Kaufman wrote the 2010 law that prescribes for basic necessities of handing off power. Kaufman later lobbied for a follow-up version before Trump was elected to make future transitions as seamless as possible.

In a post-9/11 world, Congress agreed that transitions from one administration to the next needed to be more than social coffees and tours of cramped government buildings. For national security reasons, the outgoing administration needed to get the next administration read into what was going on internally, and part of that meant giving the new folks access to government tech and a chance to start staffing the government-in-waiting. It’s why Kaufman, who may be the best embodiment of an institutionalist as you’ll find in Washington, met so little resistance in passing his pair of bills.

Transitions between administrations have been complicated before. In 2000, a 37-day delay between Election Day and a Supreme Court ruling that gave George W. Bush the White House made things incredibly uncertain. The country’s mood was so sour that outgoing Clinton Administration aides removed the ‘W’s from their West Wing keyboards on the way out the door. The pettiness annoyed Bush so much that he personally ordered staff to cooperate with the incoming Obama team in 2008, who in turn treated the Trump team with the same respect after they won in 2016.

So, just hours after then-Sen. Barack Obama addressed an emotional crowd in Chicago’s Grant Park as the first Black candidate elected President, bureaucrats at the federal government’s de facto real estate firm processed the paperwork giving the Obama team access to 120,000 square feet of turn-key-ready office space in Downtown Washington. Separately, a team settled into office space at Chicago’s Kluczynski Federal Building as its transition offices, where Obama would hire his first Cabinet. Potential candidates were whisked into the underground garage of the building to avoid being spotted by the media.

Eight years later, Trump treated the lobby of Trump Tower in Manhattan as a red carpet of sorts for potential hires coming to interview. He paraded applicants to the front door of his Bedminster golf club. He even subjected Mitt Romney to an embarrassing meal where he unsuccessfully lobbied the President-elect for the Secretary of State gig. But when it came time for Trump to meet the outgoing president he had smeared for years, Trump still dutifully went to the White House and listened to Obama’s warning on North Korea, Iran and China.

Now, it looks like Biden isn’t even going to get a phone call, let alone a meeting. The President-elect is going to have to do his hiring via Zoom or backyard meetings at his homes in Delaware. If Trump allows them to take place, those top-secret security briefings will happen in Biden’s now-famous (or infamous) basement. The whole headache is going to make a fraught transition happening in the middle of a surging pandemic all the more difficult, hobbling it by weeks and sending more messy signals around the globe about the health of American democracy.

Bush, in a phone call and statement, wished Biden well, and urged Republicans to be grown-ups about the handover. But what’s happening two days after President-elect Biden’s victory speech is any indication of what’s to come over the weeks between now and his Inauguration, removing the Ws from White House keyboards will seem tame — even if a Congressional investigation put the price tag for the stunt at $5,000.

Then again, it’s probably not a surprise, either. As Kaufman helps his decades-long friend Biden build an administration, he’ll have to work around the very roadblocks he drafted into law to prevent. But after four years of Trump refusing to follow the most basic laws — his political convention was held at the White House, violating ethics laws — why should this be any different? 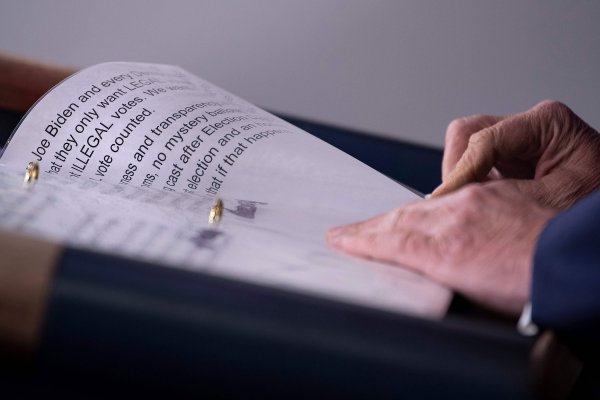