The U.S. Has Supported Democracy Around the Globe. Now Election Observers Overseas Have Advice for Americans

A Myanmar woman fixes an American flag as Yangon prepares for the first visit of President Barack Obama on Nov. 18, 2012.
Paula Bronstein—Getty Images
By Laignee Barron

As results trickled in, narrowing the race between a former vice president and the ruling party’s man, anxious voters began to amplify allegations of fraud. Tensions were running high, and the whole process seemed dangerously close to teetering off the rails.

This wasn’t the too-close-to-call U.S. election, but the Ghanaian presidential runoff in 2008. At the time, the Carter Center, a U.S.-based watchdog, advised Ghana to “remain calm, to await the final results, and to follow appropriate legal channels for the adjudication of disputes.” The poll was later given the free and fair stamp of approval by the U.S. State Department.

Historically, the U.S. has played a vital role supporting elections in fragile and fledgling democracies around the world, including in Ghana. But now mired in its own deeply polarized political contest, the country appears to be ignoring some of the same advice it has long doled out to others.

This week, President Donald Trump instead took a page from the authoritarian playbook as he falsely claimed victory and accused his opponents — without evidence — of trying to steal the election through fraud. Even if Biden wins, many of Trump’s supporters will continue to believe he is illegitimate.

Trump’s unprecedented behavior has election monitors comparing the 2020 vote to ones in less democratic countries. “It has the hallmarks of the kind of election that international observers would be concerned about,” says Eric Bjornlund, president of election monitoring organization Democracy International, who has three decades of experience assisting democracies internationally. “I don’t believe a major candidate in the United States has ever said that he would not accept the results of the election or ever said that the process is completely fraudulent.”

Trust in elections had in fact been eroding for some time before the U.S. voted. A USA TODAY/Suffolk University poll in August 2019 found that nearly 40% of Americans said that if the candidate they support lost, they would have little or no confidence in the integrity of the process.

With confidence in American democracy waning, international election observers point to the lessons the U.S. could now in turn apply from the many polls it has helped guide overseas:

Be patient: it’s normal for results to take time

First and foremost, international observers urge candidates, political parties and voters to wait for a final result before declaring victory. “In elections in many parts of the world, the process of counting the ballots takes time, just as it is doing in the United States,” say Avery Davis-Roberts at the Carter Center’s Democratic Elections Standards project. The center, started by former President Jimmy Carter, has observed more than 111 elections in 39 countries.

“[In the U.S.] we grew accustomed to having projected results on election night and having a sense of certainty of the outcome,” says Davis-Roberts. “[But] as long as the counting continues and the legal challenges are addressed openly, fairly and in a timely and effective manner, the process and the systems are working.”

Be transparent about the process

Waiting for the results is one thing. Believing them while the incumbent leader of the free world uses the White House briefing room to sow doubts about their validity is another. “An election result is only as good as the willingness of the people to accept it,” says Amaël Vier, senior program officer for international election observation at the Bangkok-based Asian Network for Free Elections (ANFREL). He points as a warning to Thailand, where the overall results from last year’s poll were announced without a geographical count breakdown, which helped fuel mistrust.

Election experts say the best resort when confronted with a such a deficit of public trust is increased transparency. In the U.S., vote counting has been filmed in places like Michigan, where each ballot is tallied only after a Republican and a Democrat agree the count is accurate, says Brian Klaas, University College London associate professor of global politics.

“Although US elections have several flaws, one of the comparative strengths of the American process is accurate tabulation of votes,” he says. “Counting is done fairly and methodically.”

Around the world, many countries have built trust in their electoral systems through deploying neutral civilian observers and having independent election commissions. The Philippines led one of the first nationwide election watch campaigns in 1986 to safeguard a snap presidential contest called by ex-strongman Ferdinand Marcos. Thousands of citizen volunteers who mobilized around the country demonstrated Marcos’ opponent, Corazon Aquino, had won the count, paving the way for the end of the dictatorship.

In the U.S., election observers from the Organization for Security and Cooperation in Europe (OSCE) have deployed to watch the polls since 2004. In a preliminary report issued this week, the OSCE mission noted that Trump’s “baseless allegations of systemic deficiencies…including on election night, harm public trust in democratic institutions.”

While international groups like the OSCE can play a vital role in promoting accountability and making recommendations for strengthening the next contest, election observers say they cannot cover the same ground as a network of citizen observers. Likewise, they’re no substitute for an independent election commission. Both provide neutral checks on the process, and can help to defuse polarization with a trusted, impartial assessment.

Unlike many of the countries whose elections it has overseen, the U.S. does not have an independent election commission which can provide a neutral check on the process, and can be trusted to give an impartial assessment.

Nor does it have a non-partisan or bipartisan mechanism to resolve disputes. Complaints are instead handled via the courts. “The U.S. is an extreme outlier in the way it administers elections,” says Bjornlund of Democracy International, “both because of how much that administration of elections is decentralized and also because the administration of the election is done by a partisan official who… can run as candidates or endorse candidates in elections they oversee.”

He says the U.S. would “hugely benefit” from having an independent national election body with the authority to implement uniform procedures and to resolve disputes.

Vier, of ANFREL, notes that many developed Western democracies never set up such institutions. “I think in our countries we’re just so used to democracy that we’re not exactly familiar with the notion that democracy is hard work and needs to be maintained,” he says.

Be prepared to reform the electoral system

“The 2020 election has confirmed that the U.S. electoral system is in urgent need of reform,” says Sarah Birch, an American political scientist specializing in electoral integrity at King’s College London. There’s no shortage of agenda items. Seasoned international elections observers point to voter suppression in communities of color, gerrymandering, outdated and contradictory regulations and voter education as among the areas that could use attention.

To improve the next election, they say, the process to review and repair should start as soon as this one is over. “The success of elections can be measured in different ways. One measure is the degree to which the election has reflected the will of the electorate and resulted in the peaceful transfer of power. For almost 250 years, American elections have largely been successful when assessed in this way,” says the Carter Center’s Davis-Roberts. “Another measure is the degree to which the elections are inclusive. Historically, American elections have been less successful in this way.”

The question is whether there is enough political will and public consensus to spur change. At stake is more than just the future American polls, observers say. U.S. efforts to promote democracy abroad could compromised by its own legacy of contentious, disputed elections. “It’s important when observing elections anywhere in the world to do so with humility and to recognize that all elections can improve in some way,” says Davis-Roberts. “I hope this election will remind American observers when they deploy elsewhere that the challenges we see in other parts of the world could be challenges we one day see at home.” 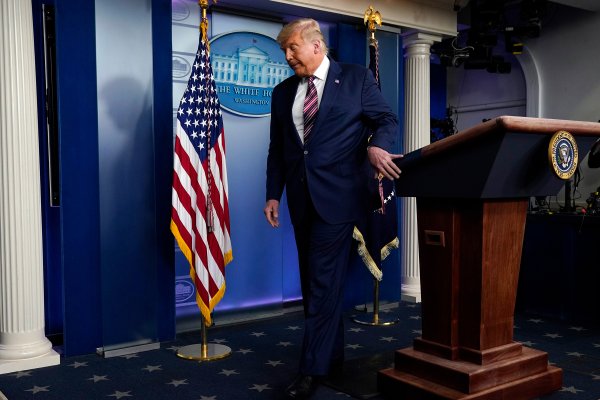 Trump Struggling to Face Likelihood He Lost Election
Next Up: Editor's Pick