President Trump Is Struggling to Face the Possibility That He Lost

Election night was not the party Trump had wanted, and he’s been complaining bitterly about it ever since—and trying to undermine faith in legitimate election results along the way. As the first returns came in, high-top tables had been arranged in the East Room along with dozens of neatly arranged chairs and a podium set up for a triumphant speech in front of a field of American flags. When Trump finally came out shortly after 2 a.m. on Nov. 4 he didn’t have a victory speech loaded into the TelePrompter, but he gave one anyway.

In rambling remarks delivered largely off the cuff, Trump falsely claimed to have won the election, surprising his staff. “As far as I’m concerned, we already have won it,” Trump said in the East Room of the White House, looking away from the TelePrompter screen and toward the cameras.

Trump largely stuck to that posture on Thursday, sending his staff scrambling to keep up with his tweets to “STOP THE COUNT!”, falsely saying he’d won states like Pennsylvania and Georgia where votes were still being counted, and claiming widespread voter fraud without evidence. State and local officials run the counting of votes, and the certification of election results, not the President. Trump spent the day between his White House residence and the Oval Office and directing his campaign officials to fight the results where he was trailing Biden.

The President then appeared in the White House briefing room on Thursday evening to falsely contend that he’s being scammed out of a victory. He unspooled a litany of complaints. He blamed a conspiracy of “big media, big money and big tech,” for interfering in the election against him. He falsely called mail-in voting a “corrupt system,” when there is no evidence of wide-spread fraud. “This is the case where they’re trying to steal an election and they’re trying to rig an election,” Trump said, speaking with a scratchy voice from the podium bearing the Presidential Seal.

Despite calling for counting to be stopped earlier in the day, Trump used the appearance to contradict himself, saying he wants “every legal vote counted,” but adding that “we think there’s going to be a lot of litigation.” He said again that he would challenge results to the Supreme Court, which could only happen if his legal challenges are heard and denied by lower courts. “If you count the legal votes I easily win. If you count the illegal votes they can try to steal the election from us,” Trump said, though he provided no evidence that votes had been cast or counted illegally.

“His supreme skill has always been to create a reality by bullying and creating a narrative, and this is probably the first time in his life that it is not working,” says Heather Richardson, a historian at Boston College.

“He’s throwing things against the wall hoping that something sticks,” says Lauren Wright, a political scientist at Princeton University. “He figures if there is any chance he can sow enough doubt to either buy him time or get Republicans on his side or somehow sway the system to somehow start working in his favor, then it’s worth it.”

Trump’s false claims of voter fraud, which academic studies show is extremely rare in the U.S., take aim at the very foundations of the democratic system, Wright says. “The outrage surrounding it is appropriate because our democratic institutions rest on people believing our election outcomes,” says Wright.

In step with Trump’s defiant posture, his campaign has set in motion a prepared legal strategy to challenge close races, launching lawsuits in key battleground states. On Wednesday, Trump’s lawyers asked to join a pending lawsuit that is before the Supreme Court. The case, brought by the Pennsylvania GOP, is attempting to block an extension that allows lawful mail-in ballots to be counted, so long as they arrive within three days of Election Day. On Thursday, the Trump campaign filed a suit in federal court in Pennsylvania to ensure GOP poll watchers are able to monitor vote counting. The same day, Trump campaign legal challenges in Georgia and Michigan were rejected by lower courts.

At the same time, as Trump continued tweeting angrily and trying to cast doubt on the integrity of the election on social media, his campaign leadership escalated their own verbal attacks. During a call on Thursday, Trump’s campaign manager Bill Stepien agreed with the President’s baseless assessment that there is wide-spread fraud going on in the vote count. “Exactly what the President said would happen is happening,” Stepien said. “The Democrats’ lying, cheating and stealing is running rampant all over this country.” Campaign senior adviser Jason Miller warned, without evidence, of “corrupt and crooked localities that are run by partisan Democrats” that threaten to “pull a fast one on the American people.”

Declaring victory in a state or nationwide doesn’t make it true, and even Trump’s allies have called the President out on his rush to declare victory. “There’s just no basis to make that argument tonight. There just isn’t. All these votes have to be counted that are in now,” Chris Christie said on ABC News about Trump’s remarks early Wednesday morning. “I disagree with what he did.”

Sean Spicer, Trump’s first White House Press Secretary, said Thursday in an interview on SiriusXM that he hasn’t seen evidence of voter fraud on a scale large enough to effect the outcome of the race. “I haven’t seen any evidence of it. And again, I don’t think it helps his case,” Spicer said.

Other Republicans who have held their noses and put up with Trump see some solace that the Senate seems on track to remain in GOP hands and that the election wasn’t a Democratic blow-out. “People are happy that the ideas he stands for have not been repudiated,” a Trump Administration official says, adding that few who work for him see him as a great manager, unlike previous beloved Republican leaders. “It’s not the same as if Reagan had lost.”

Trump’s eldest son Don Jr. spent part of the day prodding Republicans interested in running for President in four years to support Trump’s effort to fight the results. “The total lack of action from virtually all of the ‘2024 GOP hopefuls’ is pretty amazing,” Trump’s son tweeted, adding that GOP presidential hopefuls “have a perfect platform to show that they’re willing & able to fight.” President Trump, he wrote, “will fight & they can watch as usual!”

Within an hour, Arkansas Sen. Tom Cotton and former South Carolina governor and former U.S. Ambassador to the U.N. Nikki Haley both tweeted lukewarm messages about the importance of counting legally cast votes. “All votes that are *legally* cast should be counted” and there’s “NO excuse” for poll watchers to not be allowed to observe ballot counting, wrote Cotton, adding a link for donations to the Trump campaign’s legal defense fund.

Trump “and the American people deserve transparency & fairness as the votes are counted,” Haley wrote. “The law must be followed.”

— With reporting from Tessa Berenson 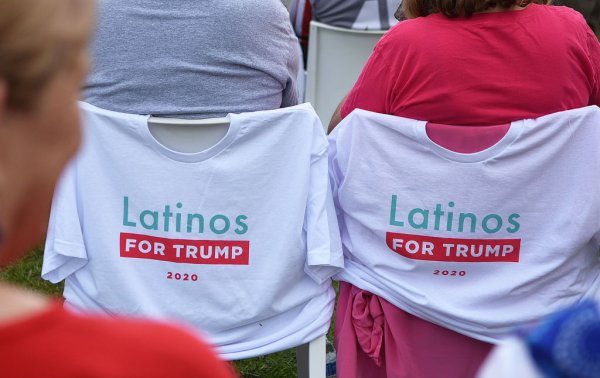 Why The Complexities of 2020 'Latino Vote' Were Overlooked
Next Up: Editor's Pick