Amid an election cycle that has seen notable criminal justice wins—like the restoration of voting rights for people on parole in California and moves toward greater police oversight—voters in a Georgia city ousted a District Attorney who was heavily criticized for her handling of an investigation into Ahmaud Arbery’s murder.

Arbery, a 25-year-old Black man, was shot and killed by two white men while jogging in a residential neighborhood in Brunswick, Ga. in February.

Incumbent Jackie Johnson, a Republican, lost her position in the Brunswick Judicial Circuit to Keith Higgins, a former prosecutor running as an independent candidate by a margin of 5,000 votes. She was first elected in 2010.

Johnson took over the case after Arbery’s death but she later recused herself because Gregory McMichael, one of the men now charged with murder, had previously worked in her office as an investigator.

Read more: Unreasonable Fear Is Killing Black Men in America—And There’s No Justification For It

However, she reportedly contacted another DA, George Barnhill, directly to take over the case. According to Georgia law, the state’s attorney general is supposed to choose a replacement in cases where a recusal has occurred.

(Having undertaken his own investigation into the incident, Barnhill reportedly told police that the McMichaels did not commit any crime. He too later had to step away from the case, because his son had also previously worked with McMichael.)

Higgins did not raise Arbery’s killing during his campaign run as an issue, but he did point out that much of his support came from those who wanted justice—and noted that the handling of the case revealed with the state’s criminal justice system.

“I look forward to working with the community and building back the faith in our legal system,” Higgins said in a statement posted on Facebook.

“I think there’s a need to have more transparency and more accountability in the office,” Higgins told local news station News4JAX. “First and foremost, part of the task is to create a greater degree of public confidence that things are being handled properly and the way they should and that everybody is treated equally fair under the law.”

Johnson’s office did not immediately respond to TIME’s request for comment.

On May 7, the Georgia Bureau of Investigation arrested both McMichael and his son Travis McMichael, charging them both with murder and aggravated assault. A third man, William Bryan Jr., who recorded the shooting was also arrested and charged with murder. The three are currently awaiting trial.

Johnson and Barnhill are under federal investigation for their handling of the case.

Higgins will take office in January. 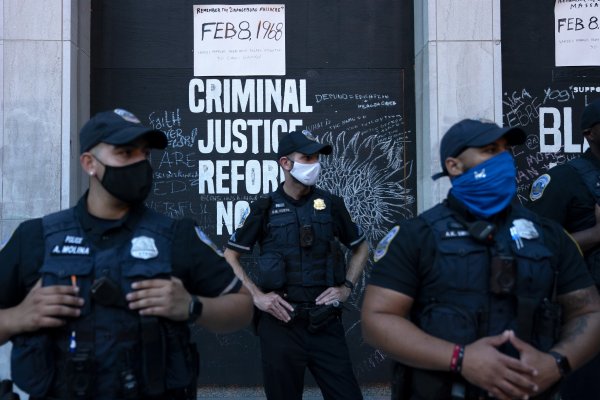