Follow along with TIME’s live coverage of the 2020 Election results here.

After a nearly two-year campaign cycle upended by a pandemic, Election Day of 2020 has arrived. Voters will not just select the next President—or give the current one a second term— but will also choose 35 Senators, 435 members of the House of Representatives, 11 Governors, and a myriad of other local officials.

If early voting is any indication, the country is on track to have a record turnout. Over 97.5 million Americans had already cast their ballots as of Nov. 2, according to data compiled by the U.S. Elections Project, or 70% of the total votes counted in the 2016 election.

But just like this election cycle was unprecedented because of the coronavirus, this Election Day —and night—will probably be as well. The official votes are never tallied on election night, but media organizations in the past have been able to project winners based on unofficial counts.

This year, more people than ever have mailed their ballots in for safety precautions, which means they may take longer to be counted and it will be more difficult to project a winner in any race. The process to verify an absentee ballot takes longer, and more than two dozen states have laws that allow ballots to be accepted after Nov. 3.

If the process is taking a while, and we don’t yet know a winner by Wednesday morning, that is fine — it means the system is working as it should be. We’ll carry updates here throughout the day as news happens. Be patient, sit back, and watch democracy at work.

What to expect tonight

With the first polls beginning to close in the 6PM Eastern hour, the night ahead could look different from any previous U.S. presidential election because of the huge numbers of voters who participated in mail-in voting. That may cause delays in counting or misleading results early in the night.

TIME’s Chris Wilson has a handy guide for what to watch as results roll in tonight. One of the earliest important moments we can expect? Keep an eye on results from North Carolina’s mail-in votes and early in-person votes, which could drop shortly after polls close. TIME will be streaming real-time race projections, maps and live footage from both campaign headquarters here.

By the end of the day, both Biden and Trump’s campaign had previewed states they view as key to their victory and claimed early evidence of turnout would benefit their side.

Speaking in Wilmington, Delaware, Biden said if he wins Florida tonight, he predicts he’ll win the election. “If Florida came in by 1 it’s over. Done,” he said. But he also said he feels good about his odds to win in other states that, in his view, would portend a Democratic victory: “You can’t think of an election in the recent past where so many states are up for grabs,” Biden said. “The idea I’m in play in Texas, Georgia, North Carolina, Florida— I mean, come on.”

He said they’re seeing evidence of high turnout in Trump counties in Wisconsin and other battleground states. Stepien pointed in particular to Pennsylvania, Florida, Wisconsin and Arizona as states to watch, saying that Florida is at “nearly a dead heat” and that he predicts in-person voting on Election Day will benefit Trump over Biden. Stepien said Biden’s campaign had hoped to “sew up these elections before Election Day even started” in those states, but “we are driving turnout today, very much making up whatever advantage the Democrats built up heading into Election Day.”

A federal judge ordered the U.S. Postal Service to sweep two dozen facilities to ensure no ballots were left behind in them, and if ballots were found, to deliver them to the requisite election boards. Facilities in the battleground states of Arizona, Michigan, and Pennsylvania were included in the order.

The USPS has been mired in controversy and litigation since the summer, when the newly minted Postmaster General Louis DeJoy implemented a slew of changes that slowed the mail down. DeJoy was a longtime Trump donor and came under intense public scrutiny for the changes, with some Democrats arguing that he was purposely undermining delivery to slow down mail-in ballots. DeJoy ultimately reversed some of the changes, and federal judges imposed an injunction on the ones he had left in place. However, there were still reports of ballots piling up in the weeks leading up to Election Day.

North Carolina results will be delayed

There have been few atypical incidents at polling locations so far this year, according to various watchdog groups tracking sites across the country. But in North Carolina, the state Board of Elections extended hours at four precincts in the state after they opened late. The final precinct will close at 8:15 p.m, 45 minutes after the original closing time.

This is good news for voters, because it means the state is taking precautionary measures to ensure everyone who wants to vote has a chance to do it. It also slows things down: North Carolina doesn’t post any results until all of the precincts have completed voting. Consequently, the nation will have to wait a little longer to see the results from this pivotal swing state, which could determine not just the presidency but control of the Senate.

Both candidates appeared in public on Election Day, making some last-minute comments about the state of the race and projecting confidence about the outcome.

At his campaign headquarters in Rossyln, Virginia, on Tuesday morning, President Donald Trump suggested that he does not have an acceptance or a concession speech pre-written. “I’m not thinking about a concession speech or acceptance speech yet,” the President said. “Hopefully, we’ll be only doing one of those two. And you know, winning is easy, losing is never easy. Not for me, it’s not.”

Biden, meanwhile, has spent the day in the swing state of Pennsylvania, in his hometown of Scranton and then in Philadelphia. In Scranton on Tuesday morning, the former Vice President noted that he won all five votes in Dixville Notch, New Hampshire—one of the first towns in the U.S. to count its votes just after midnight on Election Day. Seemingly referencing Axios reporting that Trump might declare victory prematurely, Biden joked, “Based on Trump’s notion, I’m going to declare victory tonight.”

So far, so good

Before noon Eastern Time on Election Day, federal authorities said they had not detected any major cybersecurity problems with the vote so far, according to the Associated Press.

U.S. Cybersecurity and Infrastructure Security Agency director Christopher Krebs said he has “confidence that the vote is secure, the count is secure and the results will be secure.” But he warned that Americans should stay vigilant: “There may be other events or activities or efforts to interfere and undermine confidence in the election,” he said. He said everyone should “treat all sensational and unverified claims with skepticism and remember technology sometimes fails.”

Americans have been on edge leading up to Election Day, with preparations for political unrest more widespread and palpable than around any other election in modern American history, TIME’s W.J. Hennigan reports. 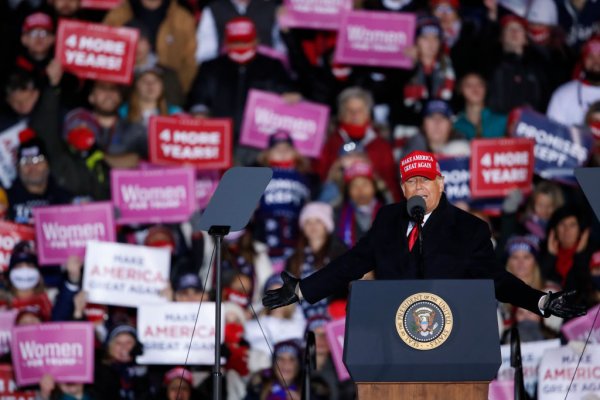