The Australian leader said Friday that he’s “very confident” signals detected in the southern Indian Ocean are coming from the black-box data recorders of missing Malaysia Airlines Flight 370, but an official heading the search quickly distanced himself from those remarks, adding even more uncertainty to the prospects for an international hunt that has lasted more than a month.

“[The search has] been very much narrowed down because we’ve now had a series of detections, some for quite a long period of time,” Prime Minister Tony Abbott said. “Nevertheless, we’re getting to the stage where the signal from what we are very confident is the black box is starting to fade. We are hoping to get as much information as we can before the signal finally expires.”

Just minutes later, Air Chief Marshal Angus Houston cautioned: “There has been no major breakthrough in the search for MH370.”

The mixed messages were just the latest confusion in a massive search effort that has yielded more false starts and false hopes than solid clues about what happened to the Boeing 777 when it vanished en route from Kuala Lumpur to Beijing on March 8 with 239 people aboard.

Abbott was speaking to reporters during a state visit to China, where he was set to meet with Premier Li Keqiang. Two-thirds of the 227 passengers aboard the missing plane were Chinese citizens.

The aircraft’s flight-data and voice recorders’ beacons are four days past their 30-day standard battery lifetime, but they still offer the best chance of finding the wreckage, and of explaining why the twin-engine, 200-ton jetliner went so tragically off course.

While Abbot’s comments seemed to indicate a breakthrough, investigators on Friday revealed that a fifth possible ping—on top of two received over the weekend and another pair on Tuesday—was not consistent with a black box.

“The Australian Joint Acoustic Analysis Centre has analyzed the acoustic data and confirmed that the signal reported in the vicinity of the Australian defense vessel Ocean Shield is unlikely to be related to the aircraft black boxes,” Houston said.

The erroneous signal was heard Thursday by one of up to 84 underwater sonar systems known as sonobuoys that were dropped into the ocean by a modified Royal Australian Air Force P-3 Orion surveillance plane.

More sonobuoys were to be deployed Friday, but experts have questioned how valuable they could possibly be. Special microphones are dangled 1,000 ft. (one-fifth of a mile) below the surface, and the device has a maximum range of some 2.5 miles. Given that the ocean is thought to be around 2.8 miles deep, the buoy would have to be positioned directly above the aircraft’s wreckage to detect anything. In addition, the black boxes’ batteries would need to be operating on full power, which is now extremely unlikely.

Most crucially for the ongoing investigation, no debris confirmed from the plane has been found despite more than 150 missions undertaken — helping to make this is the most expensive search and rescue operation in aviation history.

“My ship’s company are working 24/7 to find MH370,” said Commander Phillip Newell. “They are young, bright and enthusiastic and will step up to every challenge in the search for the missing aircraft.”

The plane took off from Kuala Lumpur early on March 8, but disappeared from radar after about an hour and apparently crashed in the Indian Ocean. There is little hope that anyone survived. 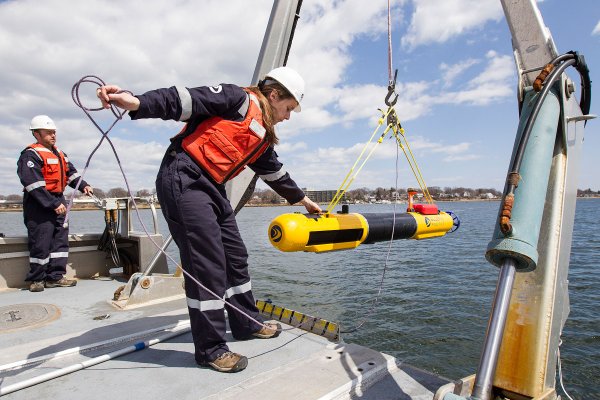