What Christians Should Do If Their Candidate Loses the 2020 Election

Worshipers inside the First Baptist Church of Williams for a Sunday service in Jacksonville, Ala., on March 1, 2020.
Calla Kessler—The New York Times/Redux
Ideas
By Andy Stanley
Andy Stanley is founder and senior pastor of North Point Ministries (Atlanta, Georgia), a television host and podcaster, and the author of more than 20 books. His latest book is Better Decisions, Fewer Regrets: 5 Questions to Help You Determine Your Next Move.

The answer is the same for everyone at the macro level: we fear loss. We are afraid of losing control, safety, power, opportunity, status, rights, freedom. White people fear what might happen. Brown and Black people fear what has already happened and what might happen next. We all fear the unknown. With political ads peddling fear around the clock, we gather in our political corners.

Neighbors divide by way of yard signs. Families divide over political reporting, factual or not. And church congregations find themselves split down party lines, inside and outside the church walls.

None of this divisiveness is pleasant, but a lack of unity among Christians is especially troublesome. Apparently, Jesus saw this coming. Not the election, but the division. In fact, he made it a matter of prayer after he ate his final meal with his disciples.

Jesus was about to die, yet he was most concerned about unity among his followers. “Holy Father, protect them by the power of your name, the name you gave me, so that they may be one as we are one. My prayer is not for them alone. I pray also for those who will believe in me through their message that all of them may be one.”

In the first century, “all of them” meant Jew and Gentile, rich and poor, slaves and freemen, tax gatherers and those from whom taxes were gathered, the educated and the uneducated. Everybody. In the 21st century, it means Republicans and Democrats, the privileged and underprivileged, the Independent, the undecided, the Libertarians, the Black and brown and
white, the married, single and divorced. Everyone.

In that conversation with his disciples, Jesus basically said, “Look, I’m about to leave. Here’s one thing I don’t want you to forget: I’m giving you a new command to replace all the other commands, and it’s very simple. Love one another. As I have loved you, you’re to love one another.” Jesus said the world would know they were his followers by the way they loved one another. He didn’t long for his followers to be unified in politics or campaign talking points, only in love.

Your political candidate will win or lose based on how American citizens vote on a Tuesday in November. But the church wins or loses, the community wins or loses—and in some way our nation wins or loses—based on how Christians love each other. That’s why Jesus said we must not allow anything or anyone to divide us. As we consider candidates and policies, there is one question Christians must not neglect in their decision making: “What does love require of us?”

Our hope is not in the perfect political party. Our hope is the message and teaching of Jesus. During our oh-so-short history as a nation, both of our current political parties and their leaders have gotten it wrong; they have failed us morally; they have failed us in terms of their leadership. Why would we as followers of an eternal king allow ourselves to be divided by temporary political systems, leaders or platforms? And why would we allow ourselves to be divided by fear? Jesus’ most oft-repeated command was fear not, fear not, fear not. Instead, we must love one another as we struggle and sacrifice for the unity Jesus prayed for.

I have two suggestions for Christians during the days before and after this election. First, pray like Jesus prayed. Let’s pray for oneness among Christians. Second, find a way to love someone with whom you disagree politically. Listen, learn and love unconditionally.

Read more: America Is Being Pulled Apart. Here’s How We Can Start to Heal Our Nation

If you’re thinking, “Well, I don’t even know anybody I disagree with politically,” that’s a problem. Can I push a little bit? Maybe that’s why you’re so convinced you’re right. If you’re thinking, “I can’t understand how anybody could believe that,” then you just made a confession. There’s something you don’t understand, and you can seek understanding. I invite you to seek out an opportunity to unconditionally love someone with whom you disagree politically.

Christians can disagree politically, but we must love unconditionally and pray for unity. Fear should not fuel our actions. Love is the power we need, and love must fuel both our conversations and choices. The gospel will spread just as Jesus intended when we, Christians across America, are willing to humble ourselves and seek unity in love. 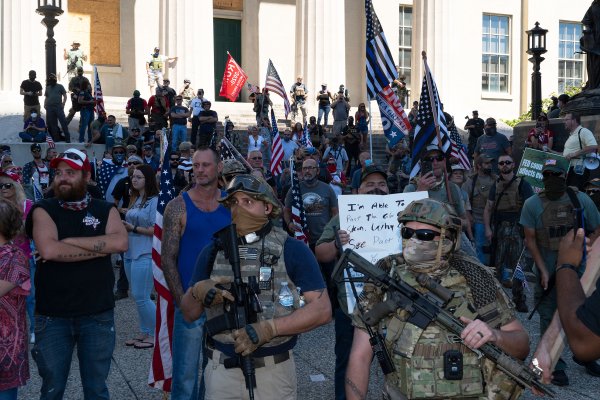