'The Relationship Has Always Been Tense.' Philadelphia's Police Department Has a Troubling History With the City's Black Community

Protesters face off with police during a demonstration Tuesday, Oct. 27, 2020, in Philadelphia. Hundreds of demonstrators marched in West Philadelphia over the death of Walter Wallace Jr., a Black man who was killed by police in Philadelphia on Monday. Community members say there is a well-documented past of the PPD's racial discrimination and brutality against the Black population.
Michael Perez-The Associated Press
By Josiah Bates

Philadelphia is the latest American city to be at the center of racial tension and protests, after the Oct. 26 killing of another Black man by police officers.

Since the shooting of 27-year-old Walter Wallace Jr. in a West Philadelphia neighborhood by two members of the Philadelphia Police Department (PPD), an all-too-familiar series of events has followed: Protests and rioting, looting, violent confrontations between police officers and demonstrators, and pleas from family members of the victim for people to not destroy their communities.

Over 170 people have been arrested across four nights of protests and more than 30 officers have been injured. Philadelphia Mayor Jim Kenney has issued a curfew and called for the National Guard to come to the city, with officers expected to arrive in the city on Friday.

Following the killing of George Floyd, there has been a renewed spotlight on officer-involved shootings and police killings of Black people. In many instances, that spotlight reveals longstanding mistrust and tension between the Black community and law enforcement in impacted cities.

It’s no different in Philadelphia. Those familiar with the city and its history say there is a well-documented record of racial discrimination and police brutality wrought against Black residents.

The most infamous incident occurred in 1985, when police dropped two bombs on the headquarters of MOVE, a Black militant liberation group, similar to the Black Panthers, which was founded in the city in 1972. In 1978, MOVE members had been involved in a shoot-out with police that led to an officer’s death. The group had been classified as a terrorist organization by then-Mayor Wilson Goode and his police commissioner Gregore J. Sambor.

On May 13, 1985, police received warrants for multiple members of MOVE who were living in the group’s headquarters in West Philadelphia. The warrants were for parole violations, illegal possession of firearms and making terrorist threats, among other charges. After police arrived at the house, a gunfight between officers and MOVE members began, lasting for over an hour. Commissioner Sambor then ordered the house to be bombed.

A state police helicopter flew over the neighborhood and dropped two bombs, destroying the house as well as nearby homes that had already been evacuated. Eleven people, including five children, died in the MOVE house.

Smoke billows over rowhouses in West Philadelphia on May 12, 1985 after the police bombed a residence home to members of the Black liberation group MOVE. Police on horseback and emergency vehicles block off a street as residents walk towards the scene.
Bettmann Archive—Getty Images

The only adult MOVE member to survive was charged with riot and conspiracy and served seven years in prison.

But the issues between the police and the Black community in Philadelphia can be traced back at least to the late 1800s, when Civil Rights icon and co-founder of the NAACP W.E.B Du Bois published his book The Philadelphia Negro. At the time, Black people comprised just 5% of the city’s population but, as Du Bois noted, made up about a third of the city’s jail population.

“There is this long history of over-policing and policing that almost seems to want to make a point to the Black community that the cops are in charge no matter what,” Reverend Mark Tyler, an activist and community leader in Philadelphia, tells TIME.

In 1958, Black residents in the city testified before a city council committee, arguing that police had been targeting Black community members with unauthorized home raids, racially-offensive comments and searches on the streets with no probable cause. This testimony led to the very first civilian review board in the country.

Just five years later, one of the first studies of police shootings in the U.S. revealed that the victims in 90% of all the police killings in Philadelphia between 1950 and 1960 were Black. Almost all of them were considered justified by police—though activists and historians believe differently.

“From 1900 to 1950 every indication [suggested] that Black people were treated differently by the police,” Charles Gallagher, a professor of criminal justice and sociology at La Salle University in Philadelphia, says. “The police saw them as more criminal. This was straight-up biological racism that these officers had internalized and it affected the way they police.”

The situation worsened further once Frank Rizzo became the city’s police commissioner in 1967.

Rizzo was viewed as a “source of pride” by many of the white population in Philadelphia, Gallagher says, and wanted to keep the Black population “in their place.”

As commissioner, Rizzo’s department engaged in well-documented police brutality and discrimination against the Black community. By 1973, at which point Rizzo had risen to become the mayor of Philadelphia, a federal judge ruled that the police violations in the city reached a point of being systemic—and that there was nothing in place to deal with it.

In 1979, the Department of Justice filed a civil suit against Mayor Rizzo and the entire police department for “using deadly force where it is unnecessary, physically abusing arrestees and prisoners, extracting information and confessions by means of physical brutality.” The suit was later dismissed.

This spring, in the midst of protests in response to the George Floyd killing, a statue of Rizzo in the city was taken down.

Read more: Confederate Monuments and Other Disputed Memorials Have Come Down in Cities Across America. What Should Take Their Place?

Systemic problems have continued through the decades and remain prevalent today.

“There’s no trust here. Individuals have been shot in the back running away from police. Weapons have been planted on them, false accusations have been made against them,” Pastor Melanie DeBouse, a community organizer and activist in the city, says. “This has created a sense of hostility towards the police.”

In 2015, an assessment of the PPD undertaken by the Department of Justice found that, while crime in the city had decreased, police shootings had gone up—and that 80% of the people killed by police between 2007 and 2014 were Black. The assessment concluded that the department had insufficient training and was not transparent enough.

The most consistent change community leaders in Philadelphia are calling for is a civilian-led police oversight board of the police—one that has real power and influence over the police department.

The city does have a “Police Advisory Commission,” which has the goal of improving the relationship between the police officers and the residents by analyzing the “policies, practices, and customs of the Philadelphia Police Department,” but community members say that this group is ineffective and powerless. Activists like Reverend Tyler feel the department needs a new form of civilian oversight, with the power to oversee policy and discipline.

“We don’t believe that [the killing of Wallace] had to happen,” Tyler says. “How many more Black people have to die before something changes?” 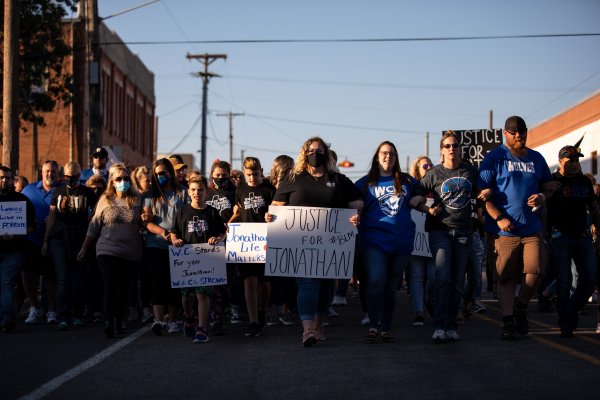