Scandal WATCH: In Which Relationships (And Buildings) May Blow Up

Warning: Spoilers abound due to the fact that this is, in fact, an episode recap.

Last week’s episode ended at a tense moment: Specifically, Jake had his hands around Olivia’s neck and was telling her that by dismantling B613, she had essentially killed the president. We find out that this isn’t true (yet) when Fitz storms in to also reprimand Olivia for breaking apart the organization. Now Olivia’s mom is on the loose with a bomb meant to kill the president at an undisclosed location, and there’s no secret spy organization to stop her. This means that Fitz has to stay in hiding days before the election to avoid, well, an explosion. But the bomb wasn’t the only thing in danger of blowing up this week. Relationships were at risk of combustion as well.

Here are our biggest questions throughout the episode. Some were answered, others weren’t:

Why didn’t Mama and Papa Pope work out?
When evil Russian terrorist Dominic — Mama Pope’s first and only love — rhapsodizes about how, “Today, American blood will flow,” he gets cut off. “Yeah, yeah, yeah,” Marie sighs, “We got it.” If Mama Pope can’t handle a soliloquy, it’s no wonder she and Eli weren’t a good match (terrorism aside). Eli hates Dominic, and captures him, giving Marie the chance to save his life if she divulges where the bomb is. “Goodbye Dominic,” says ice cold Mama Pope. She loves no one. Refusing to let Marie’s passivity ruin the moment, Eli decides to shoot Dominic in the head in the middle of Olivia’s office anyway. Olivia is not pleased: 1) because there’s blood on her carpet, 2) because her mother is an evil monster who doesn’t even care about her evil monster match. Eli refutes Olivia’s claim that Marie loves no one and convinces her to go on the campaign trail with Fitz to keep him from getting murdered because Mama Pope would never let her daughter be a casualty.

Who is Jerry’s Dad?
Leo Bergen is onto the fact that Jerry might not be Fitz’s son, so he has the boy’s field-hockey-playing girlfriend collect DNA samples in exchange for an acceptance—”not off the waitlist”—into Harvard. She comes back with a bag full of semen (ew) and a small additional request. She wants in on Yale, too, and Leo complies. That would be quite the reveal six days before the general election. Whether Jerry is the product of a loveless marriage or a horrific rape waits to be seen.

What was in Mellie’s cup? (And can we have some?)
Mellie was pure gold throughout the episode, and it was all because of a mysterious substance in her big coffee cup. Spoiler alert: it’s booze. Mellie is drunk in every single scene: When Fitz is considering speaking at a dead Senator’s funeral in spite of death threats (“I get to stannnd by my man”), during phone banks, and even onstage during a campaign event. “Are you drunk? Take a mint,” Cyrus finally says. Most importantly, drunk Mellie quasi opens up to Olivia about Fitz’s father (Big Jerry) and that he ordered a paternity test to see if little Jerry is actually his. And she wants this fact to destroy Fitz:”I want his head in the fire and I want to see him burn.” Mellie then reconsiders, not about wanting Fitz’s head to combust but rather about exposing the true father of her son. Olivia handles it, results are forged for Sally and Leo (“Can’t win them all,” says Sally), and Mellie gets the real results — which we don’t know — at the end of the episode.

Who does Olivia love?
Jake spills the beans to Fitz that Olivia had sex with him to steal his files on B613. But instead of having a meltdown, Fitz seemed to understand. “It makes me crazy,” he told Olivia softly over the phone without actually going crazy. This episode finally allowed the audience to see Olivia and Fitz share sweet moments, exchange banter. She loves Fitz, as she tells Jake during an inexplicable late night phone call, “And I felt something with you last night and it feels like betrayal.” Jake replies: “It feels like a first step.”

We won’t have to see Quinn, Huck, and Crazy Charlie lick each others’ faces, will we?
When Quinn wasn’t acting like a bitter intern coming back to her old workplace — “I see you make your own coffee now,” she fumes when at Pope’s office., because even her zingers lack any zing — she was a part of Scandal’s most uncomfortable love triangles. Crazy Charlie, who is unsurprisingly overly protective of Quinn, is onto the fact that there is something between his lady and her tooth puller/face licker. Quinn tries to diffuse, until she and Huck are alone and start having sex on the hood of the car. No, no, no.

Who is the most evil person on the show?
That’s a trick question. Everyone is a soulless murderer. The real question is who was the most evil person on the show this week. The answer: Cyrus. Jake finds out that the bomb meant to kill Fitz was never in the school the President was campaigning at, but rather it was planted in the place a high profile Senator will be having his funeral. Jake warns Cyrus to call the police and keep the president away. Cyrus decides to only do the latter. Sally is on her way to the funeral and Cy wants her dead, no matter how many people go down with her. Cy officially gets to skip the line when entering hell.

Will Fitz ever win an election on his own?
I mean, probably not. It looks like Cyrus is killing the only competition. Fitz ignored risks of murder to go back to Defiance, Ohio — the very spot in which a voting machine was rigged to help him win the first election — to regain control of his presidency. But unfortunately it just served as a reminder to audiences about how helpless he is.

Who’s gonna die in the season finale?
No one? Everyone? Quinn? (Sorry, based on her tonsil hockey and sex on the hood of a car, we’re guessing she’ll be here for a while.) The episode ended with many hints at doom: Papa Pope was found bleeding out on Olivia’s office floor (maybe he tried to give a monologue in front of Mama Pope); Harrison is being held at gunpoint by terrorist Adnan Sharif (there’s no justice if he goes before the former Gladiator who shall not be named; and a bomb that we found out from next week’s previews will go off at a high profile Senator’s funeral could kill Sally Langston, Leo, Andrew (poor Mellie), and a bunch of other innocent mourners.

Best quotes of the night:
Jake: “All it takes to kill us is a good quick tug on the zipper.”

Olivia: “I’m telling you, I’m black. Sally doesn’t have the NAACP.” (This is one of the few times Liv’s race has been mentioned.)

Harrison: “Can I call you Papa Pope?” 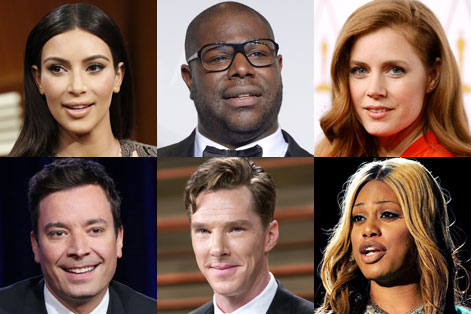