Seasoned Polish diplomat Amb. Urszula Gacek is a veteran of hotly contested elections in places like Ukraine and Armenia. But observing the 2020 U.S. polls as chief of the U.S. mission from the Organization for Security and Co-operation in Europe, which observes elections in 56 member states, is proving to be a task of three-dimensional-chess-level complexity.

More Americans are expected to vote by mail than ever before during the pandemic, and a record number of court cases are “are changing the rules of the game while the game is on,” Gacek tells TIME. The current level of political polarization is unlike anything the OSCE has recorded in the eight previous U.S. elections it has observed since 2002, she says, and voters, faced with COVID-19, social divisions, and widespread misinformation about election procedures, have told observers they aren’t confident in the system. “It’s an election about an election,” says Gacek.

The anxiety that Gacek and her colleagues have tracked among voters has been repeatedly stoked by President Donald Trump, who has refused to agree to a peaceful handover of power, and decried mail-in voting, insisting he will only lose if the vote is rigged. The OSCE’s 30 observers and 11 election experts in the U.S. mission have recorded “grave concerns” among the election and federal officials they’ve interviewed about the “risk of legitimacy of the elections… due to the incumbent President’s repeated allegations of a fraudulent election process,” according to the OSCE’s pre-election preview report.

Gacek’s team, invited by the State Department, as the U.S. is an OSCE participating state, will have observers in 28 states, interviewing those involved, and using data from the states and federal agencies to analyze issues like how many people were turned away because of identification issues, or how many ballots were disqualified on technicalities. The mission, from the OSCE’s Office for Democratic Institutions and Human Rights, arrived on Sept. 27 and is due to remain until Nov. 12, but Gacek and some team members may need to stay longer. “We listen to everybody, and that includes all the candidates …. Only when we have analyzed the whole process will we be able to make an assessment on whether that fear was valid.”

Many foreign diplomats based in Washington are less diplomatic than Gacek, anonymously sharing their fears that Trump’s words presage a bloody U.S. election season in a year that has already seen millions of Americans take to the streets to protest the killing of Black Americans by police and the Administration’s handling of the pandemic, and counterprotests by armed Trump supporters, furious over local government shutdowns of their communities to stop the spread of the virus.

“I’m shocked that Trump rejected a peaceful handover of power,” says one senior western official, speaking anonymously, as most of the diplomats did, fearing the Trump Administration would retaliate against them and their countries for expressing fear that Trump might reject a result that goes against him. “I’m expecting chaos,” says another. “Everyone here is armed,” she said.

Many of the embassies in upscale Washington neighborhoods are already making the kind of crisis preparations usually reserved for wars or natural disasters: checking their generators are working and warning employees to stock up on several weeks’ food and water in case the U.S. election day brings chaos, according to the senior western official and four other European and Mideast diplomats based in Washington. At least two of the five have looked into arming themselves, in case the nation’s capital is convulsed with armed demonstrators.

Charles Kupchan, a former top Obama Administration national security official and senior fellow at the Council on Foreign Relations, is hearing a similar chorus of concern from his foreign contacts, who have expressed fears — which he shares — of “some kind of sporadic violence, a confrontation between pro-Trump and pro-Biden camps on election day, or “a militia getting out of control.”

That fear is echoed in a report from the International Crisis Group that warns “the 2020 U.S. presidential election presents risks not seen in recent history,” including unrest that could “increase if either side forms the impression that the vote has been rigged.”

This week, shopkeepers in the nation’s capital seemed to share that alarm, boarding up some storefronts as they did during the summer of Black Lives Matter protests. D.C. Mayor Muriel Bowser told reporters on Thursday that she hadn’t advised businesses to lock down, but added that “we are preparing to ensure the city’s safety” because of “people who would like to cause mayhem and trouble.” City and law enforcement officials, speaking anonymously to discuss security preparations, say they are braced for protests, whichever candidate wins. “I would say it’s unlikely we’re going to make it through next week with no incident,” Kupchan says.

As many Americans grow increasingly fearful about the possibility of post-election violence, others argue that the nation’s institutions are strong enough to all but ensure a peaceful outcome. One of the diplomats also downplayed the “extreme scenario of two candidates claiming victory,” and posited that Trump’s rhetoric might simply be designed to rev up his base.

“It’s hard to tell if that’s just a tactic” to get them to vote. He sees the social friction between left and right as similar to the populist-driven protests in Europe, where people in several countries have expressed their discontent with a globalized system they feel has left them behind. “Part of our societies feels pushed aside…not truly represented…and the pandemic further exposed that.”

But another diplomat describes the U.S. election season as a surreal and gut-wrenching experience. They had hoped, upon accepting a post in Washington, D.C., to see democracy in action, and instead say they are witnessing authoritarian-style rhetoric. “I thought I was coming to a democracy. This has been a disappointment. The dream of America is over,” they said.

Unofficially, many members of the diplomatic corps are hoping the election will swing the way of former Vice President Joe Biden. Kupchan says he’s heard “a lot of praying going on” from diplomats who hope Americans will cast out a President who has threatened to leave NATO and has already withdrawn some U.S. troops from joint military efforts in Syria, Iraq, and Afghanistan, often with little explanation and no advance warning. His foreign policy by fiat has regularly left diplomats posted to Washington scrambling to determine just how serious the President is about the latest surprise policy pronouncement by tweet.

But those same officials also wonder if a Biden Administration can address the feature among a sizeable segment of the U.S. population that these moves pander to: the instinct to turn inward, as best expressed in Trump’s revival of the 1940s isolationist slogan of “America First,” to keep the U.S. out of World War II.

“Trump has an uncanny ability to tap into this strain of American sensibility, which has always had traction in the heartland,” says Kupchan, author of ISOLATIONISM: A History of America’s Efforts to Shield Itself from the World. He points out the U.S. drive to turn inward is engrained in the national psyche, starting with President George Washington who advocated “in regard to foreign nations … extending our commercial relations” but to have “ as little political connection as possible.”

One of the senior European diplomats says that the United States’ shrinking influence around the world has less to do with Trump’s isolationist tendencies than it does with the rising power of China, and issues like climate change that are too big for one country to fix. Any U.S. Administration will struggle to unilaterally find a solution to those problems, he says: “Even if the U.S. remains powerful, it won’t be as powerful as before. Whoever becomes the next President will have to cope with this.”

Gacek, who served as Poland’s Consul General in New York during the Obama Administration, would not be drawn on comparisons between the candidates in the race she is observing. “We do not care who wins the election. The only people we are rooting for are the voters,” she says.

She says she has witnessed the positive side of U.S. democracy this election season: civil society stepping into the chaos caused by the pandemic, teaching citizens how to register to vote, how to properly fill out mail-in ballots, or finding ways to get them to the polls. “Everything like that has another side to the story.”

Depending on what her team sees between now and Nov. 4, Gacek is hoping the OSCE’s final report, delivered around Inauguration Day, will help reassure voters that the process was sound. “It’s a Hitchcock thriller, and the suspense is building,” she says. 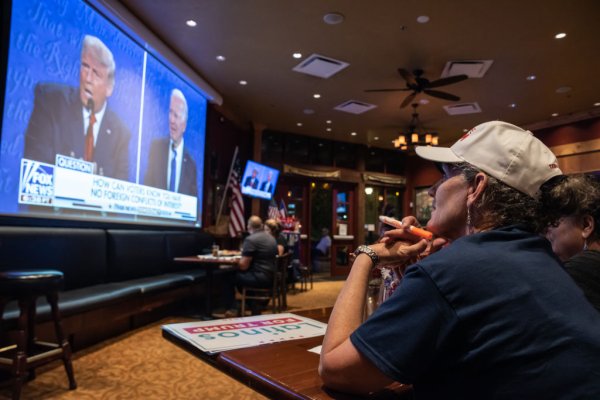 Yes, Texas Could Go Blue This Year
Next Up: Editor's Pick