In the Fight for Pennsylvania, Donald Trump Comes Up Short on Empathy and Resources

Back in 1986, now-fabled Democratic strategist James Carville was working on Bob Casey Sr.’s first successful bid for Governor when the ever-quotable Cajun observed that Pennsylvania was basically Philadelphia in the east, Pittsburgh in the west and Alabama in between. (Left unsaid? It’s a very white rendering of Alabama.)

Carville’s is a phrase that has rubbed Pennsylvanians raw since, but it’s become sort of a shorthand for political operatives and journalists alike. In fact, the part that doesn’t fit neatly around the two major cities forms something of an upside-down tophat. “Winning the T” has been the Republican playbook for decades, while Democrats try to run up the score in the cities. Then the parties routinely scrap over a few swing suburbs.

That seems to be playing out once again in 2020. As The D.C. Brief continues our national tour of swing states and what the campaigns are facing on the ground, it’s time to unravel one of the three typically Democratic states that broke for President Donald Trump four years ago, cracking Hillary Clinton’s insurance policy of the so-called Blue Wall that has traditionally stretched from St. Paul to Philly. Like Michigan and Wisconsin, Pennsylvania broke a lot of Hillary hearts four years ago.

Trump is trying hard for a sequel, but he’s done himself few favors in the Keystone State by suggesting to women that his work on the economy was to send husbands back to work, and alienating voters of color with seemingly every utterance. With less than a week before votes start to be counted on Nov. 3 — and with close to two million ballots already cast in Pennsylvania — it looks instead like Trump is trying to close a persistent gap with Biden in polling, early voting, advertising and maybe even enthusiasm.

Trump apparently believes the contest can be won over the fracking industry in the state. If you’ve been confused by the President’s frequent mentions of fracking during the two debates and during his visits to Pennsylvania, it’s a strategy designed to appeal to the state’s energy workers, who enjoyed a boom during the last decade but are finding harder times as energy prices dip.

Trump has noted repeatedly that Biden has said he opposes the extractive practice, which is criticized by some environmental groups. But there’s one problem: Biden dipped his toe back in the state on Monday to tell reporters Trump had it all wrong, that he understands fracking has value in the present but isn’t a long-term solution to America’s energy needs. And in survey after survey, voters say they believe Biden is the more honest and trustworthy candidate.

Perhaps more importantly, Biden appears to be well ahead of Trump on the question of caring. And in the suburbs, the compassion quotient is what motivates female voters who have been moving away from Trump in droves. Among all voters in Pennsylvania, 60% say Biden cares about “average Americans” and 45% say that Trump does. Even Republicans say they think Biden is acting in good faith; among Republicans, 25% say Biden cares. Among Democrats, only 8% say Trump does.

In other words, Trump has an empathy deficit in Pennsylvania and it’s not clear hydraulic fracking can fix it. Trump has never overtaken Biden in the rolling Real Clear Politics average of Pennsylvania polls in the last 12 months; the closest Trump has come is a 2-point gap. Now there are a handful of more recent small slides that should have Republicans worried. According to Quinnipiac University’s polling of Pennsylvania voters, who in the latest survey favor Biden by 8 percentage points, there’s another bit of movement in this arena. Four years ago, Trump had a 17-percentage point advantage over Clinton among white voters without a college degree, according to exit polls. This time, Biden has cut it to 13 points.

Pennsylvania airwaves have been a brutal slog for months. More than 225,075 political ads have run in Pennsylvania media markets between Jan. 1 and Oct. 18, according to an analysis of Kantar/CMAG data by the Wesleyan Media Project. An NPR analysis of data from the tracking firm Advertising Analytics finds only Florida has seen more presidential-level spending in this year: a combined almost $196 million on Keystone airwaves alone.

But these days, most of that spending is coming from Biden’s camp. Trump pulled down about $2 million of planned spending from the state in September as his campaign hit fundraising skids. He stopped running ads altogether in Pennsylvania and Michigan soon after. Given Biden’s lead, Pennsylvania is looking a lot like a case study of what happens when a campaign takes its eye off the ball in a state that is a cornerstone of an electoral strategy.

Still, don’t put a blue magic marker in Biden’s Pennsylvania boiler room just yet. Biden’s lead in the RCP average in Pennsylvania never topped the 8.5 percentage points he saw at the end of July, when Trump suggested he could send federal troops to quell protests over racial injustice, the U.S. passed 4 million confirmed COVID-19 cases and Trump refused to pay his respects for civil rights icon and Congressman John Lewis. A week before Clinton lost Pennsylvania by about 44,000 votes, she was up 6 percentage points over Trump in the RCP polling average.

And, finally, the current unrest in Philadelphia — where lines to vote early have been long and mail-in votes are coming back at a quick clip — could offer a late-campaign boost for Keystone State residents who might be swayed by the President’s appeals for law and order. The violence may be far from “The T,” but coverage of it is not, and Trump is doing his solid best to scare rural voters into his corner. “The riots in Philadelphia are the most recent consequence of the Liberal Democrats’ war against the police,” the White House said in a statement released just before 1 a.m. today.

One thing that’s certain: Pennsylvania is a state that shows up. In 2016, 70% of registered voters cast ballots, according to state officials, compared to the national average of about 55%. This year in Pennsylvania, Democrats have already cast almost 1.2 million votes, surpassing the 68,000 votes cast at this point in 2016, according to data from TargetSmart’s analysis. The Democratic data firm also found 528,000 Pennsylvania Republicans have cast ballots, versus the 78,000 who had logged their ballots by this point four years ago.

That means Democrats appear to have erased the GOP early-vote advantage in Pennsylvania. What used to be rough parity has now tipped to a 2-to-1 Democratic advantage. 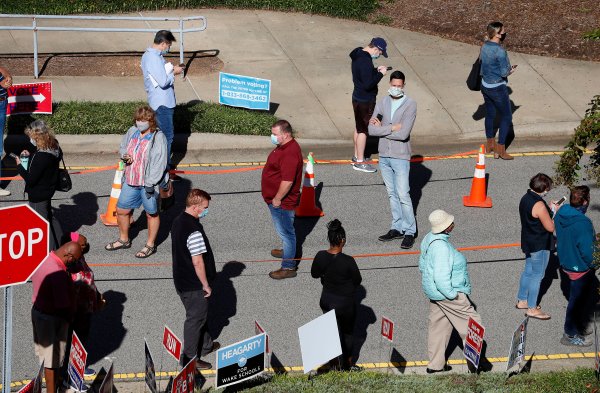 College-Educated Women Are Fleeing Donald Trump. It Could Cost Him North Carolina
Next Up: Editor's Pick