Pizza to the Polls food truck staff dance and spread good energy to voters waiting in line on early voting day in New York, on Oct. 24, 2020.
Jason DeCrow—AP/Pizza to the Polls
By Madeleine Carlisle

Voters in line to cast their ballots early at Philadelphia’s Liacouras Center on Saturday didn’t expect to see a show. So when two local legends—rapper Bahamadia and DJ/music producer Cosmo Baker—rolled up on a flatbed truck and began blasting music, “you could just see the look of elation that came across people’s [faces],” Baker shares.

At one point Baker threw on the classic hit “Before I Let Go” by the R&B group Maze & Frankie Beverly and Bahamadia rapped her song “Uknowhowwedu” over it. Voters danced in line, cheering. People who’d already voted stuck around to watch.

“I’ve been doing this 30 years. It was one of the most unique and most joyful experiences of my entire career,” Baker tells TIME,” adding that he’s already dropped off his mail-in ballot.

As COVID-19 cases continue to spread throughout the U.S., an unprecedented number of Americans have turned to early voting in an attempt to avoid a surge of people in close quarters on Election Day—and in response to widespread misinformation that vote-by-mail is prone to fraud. As of Oct. 27, at least 67 million Americans have already voted early—48% of the total votes cast in the 2016 election, according to The Washington Post.

Extremely long lines have been reported across the country, including in New York, Georgia, Indiana and Pennsylvania to name just a few states. As people wait for hours to cast a ballot, numerous groups have found creative ways to keep voters engaged with their civic duty, and hopefully even entertained while doing so.

Baker and Bahamadia performed as part of outreach from Joy to the Polls, a non-partisan initiative led by the non-profit Election Defenders to fight against voter intimidation and harassment. Election Defenders, which was formed this year, has trained thousands of volunteers on de-escalation tactics, and recently launched Joy to the Polls with the intent to use music as its own form of mediation.

“Because voters have to wait on long lines, because there’s been threats of intimidation, we are going to be there bringing some joy and trying to set a different tone,” says Nelini Stamp, campaign director for Election Defenders and the director of strategy for the Working Families Party.

On Saturday, Joy to the Polls sent local artists and performers to seven different polling locations across Philadelphia to cheer on voters, several videos of which later went viral. Stamp says they plan on performing in more states in the run up to Election Day, and also plan on sending volunteers to hand out water, hand warmers, face masks and hand sanitizer to people waiting in line.

Joy to the Polls also recently launched an online tool kit for people to bring the initiative to their own city, and has been asking celebrities and activists to to compile their own #JoyToThePolls playlists to post on Spotify.

“Art is the expression of life, and I feel like it’s something that should be utilized for the greater good,” Bahamadia tells TIME. Her performance on Saturday was particularly moving for her, she says, because it was so close to her childhood home.

Musical group the Resistance Revival Chorus also performed for Philly voters on Saturday with Joy to the Polls, and member Meah Pace says they came to “celebrate [voters], uplift them, and keep them from getting tired and not turn away from the polls.” But, Pace adds, “we shouldn’t have to be doing this in the first place.”

“We realize that this is voter suppression,” Pace says, referring to the extremely long lines. “I know for a fact that the people in that line realize that they should not have to be standing [for that long.]”

These long lines during the pandemic have been compounded by the shrinking number of polling places designated in numerous states, forcing voters to travel farther. An analysis of the 2018 election by the Brennan Center for Justice found that Latino and Black voters were more likely than white voters to have to wait in long lines; voters living in counties with fewer electoral resources (including fewer polling places, voting machines and poll workers) had to wait two to three times as long to vote.

Meanwhile, in New York City, 80 young members of the Brooklyn United Marching Band—an arm of the nonprofit Brooklyn United Music and Arts Program—played for voters as they waited in line for hours at the Barclays Center on Saturday.

“It was a celebration of early voting,” says Ty Brown, the executive director of Brooklyn United, who organized the performance. Brown says he wants to give young people who can’t vote an opportunity to be a part of the process.

“There’s nothing more American than going [to the polls] and making your own decision,” he says. “It’s important for us to keep our young people inspired and understanding how important it is.”

The marching band will be back out this upcoming weekend to hand out coffee and hot chocolate as temperatures drop.

Other organizations have also focused on feeding voters as they wait. Pizza to the Polls, which formed in 2016, had food trucks in 24 cities last weekend delivering food and water to people at polling locations, and also ran its on-demand pizza delivery service which allows people to request a pizza to any voting line where there’s a wait, regardless of the city.

Pizza to the Polls fed over 51,000 people on Saturday alone, Amirah Noaman, the non-profit’s program director, tells TIME. “People are willing to wait quite a long time to cast their ballot, and we want to be able to do a small part in making sure that they’re fed,” she explains. From Oct. 29 through Election Day, Pizza to the Polls will have active food trucks in at least 29 cities.

The non-partisan initiative Feed the Polls—which is a partnership between the restaurant recommendation outlets The Infatuation and Zagat and the non-profit The Migrant Kitchen—plans on having hundreds of volunteers hand out healthy meals to voters on Election Day itself, when wait times in many states are expected to be even longer still. They plan on operating in numerous cities, including New York City, Philadelphia, Phoenix, Miami, Los Angeles and Denver. The intention, says The Infatuation and Zagat CEO Chris Stang, is to make sure food insecurity doesn’t prevent people from casting their ballots.

Stang says he was inspired to launch the initiative after Michelle Obama’s speech at the Democratic National Convention, in which she urged voters to “pack a brown bag dinner and maybe breakfast too, because we’ve got to be willing to stand in line all night if we have to.”

“The whole country right now very much seems aligned around the idea that this is a really important moment,” Stang says.

Paola Mendoza, one of the organizers of Joy to the Polls and a co-founder of the Resistance Revival Chorus, says Saturday’s performance was one of the most meaningful of her career. As the Chorus sang “Ella’s Song” by Sweet Honey And The Rock and the gospel anthem “This Joy,” she found herself welling up.

“This is a very important election for me personally,” Mendoza says. “To be able to sing, and say these really impactful and important words, many of [which] come from the civil rights movement… is extraordinarily humbling.”

“It was really beautiful to see people singing along with us, [to see] people dancing,” she continues. “Really exercising their civic right and duty of voting, with joy.” 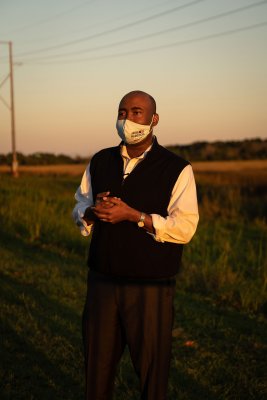 Jaime Harrison Gives Lindsey Graham A Run for His Seat
Next Up: Editor's Pick