Is There Any Safe Way to Socialize Inside This Winter?

For months, there’s been a relatively easy way to socialize safely during the pandemic: take it outside. But now, with cold weather creeping into many parts of the world, park picnics, socially distant walks and outdoor dining are about to get less appealing for lots of people. Experts have warned for months that indoor gatherings are prime places for the virus to spread—but does that mean there’s no way to see anyone aside from your housemates this winter?

Why is outside safer than in?

SARS-CoV-2, the virus that causes COVID-19, can spread when someone comes into contact with large respiratory droplets, like those that escape with a sick person’s cough or sneeze. These large droplets are unlikely to travel further than six feet, hence the ubiquitous guidance around social distancing—which is usually easier to achieve outside than in.

But someone infected with SARS-CoV-2 is also constantly exhaling tiny respiratory particles, known as aerosols, that linger in the air. (Wearing a mask reduces the number of droplets and aerosols that get into the atmosphere.) In outdoor air, aerosols dissipate fairly quickly. But in an enclosed space, particularly one that is poorly ventilated, they can build up over time and potentially endanger anyone in the room, even people sitting more than six feet away from the sick person.

An Oct. 27 study published in Physics of Fluids found that aerosol transmission is not as much of a risk as droplet transmission, but confirmed that COVID-19 can spread via aerosols, especially in poorly ventilated spaces. Some “super shedders” also produce an above-average number of particles, unknowingly placing those around them at greater risk of infection, the paper found.

“If you walk into a bar and somebody starts smoking, initially you won’t really notice it,” says Shelly Miller, an indoor air expert from the University of Colorado, Boulder. “But eventually the smoke fills the whole bar, and it will stay in there because there’s no ventilation.” The same thing happens with the virus—and the more people who are exhaling aerosols into the air, the faster they build up.

Is there any good way to socialize inside?

Any time you invite someone into your home, you’re increasing your risk of catching or passing on the virus, since people can be infectious without showing symptoms. It’s still best to see people outdoors or virtually.

But if you do decide to have an indoor gathering, try to replicate the things that make outdoor hangs safer, suggests Dr. Beth Thielen, an assistant professor of pediatrics and infectious disease at the University of Minnesota Medical School. Pick as large a space as you can and open windows for ventilation. You should also keep the group small and try to wear masks the whole time, Thielen says.

If it’s too cold to open all the windows, switch up which ones are open, says Lidia Morawska, a World Health Organization consultant and aerosol expert from Australia’s Queensland University of Technology. Studies have shown that people sitting downwind of an infected person are the most likely to get infected, so mixing up airflow may help neutralize risk. “Don’t stay in one place. Mix. Move. Change how you open the windows,” Morawska suggests.

The length of your exposure matters too, Miller says. “If you have really high levels [of particles in the air] but you’re breathing them for a shorter time, your risk is going to be lower,” she says. Miller says she’s invited friends over for 30-minute catch-up sessions, ideally wearing masks, to get in some socializing without spending too long together.

In most indoor establishments, you likely have little control over whether windows are open and how many people are inside; you also have no idea whether your fellow patrons have been exposed to the virus. But some public places are likely safer than others.

Dining or drinking inside means you’ll inevitably be around maskless people, which removes a layer of protection. (Speaking loudly over the din of others also leads people to expel more droplets and viral particles, studies have shown.) Sit-down restaurants where people mostly stay at their own tables are likely safer than bars, where people tend to mingle and may ignore public-health guidelines after they’ve had a few drinks, says Dr. Tom Hennessy, an infectious disease epidemiologist at the University of Alaska. In either case, try to pick places that have limited capacity, and avoid establishments that feel hot and stuffy or don’t have many windows—they probably don’t have good ventilation, Miller says.

Public places not meant for eating and drinking, like malls and museums, have some advantages over bars and restaurants, since everybody can remain masked the whole time they’re inside. They also tend to be much larger, allowing viral particles to disperse—especially if they’re operating at reduced capacity. “If you’re in a large room and the room is well-ventilated and there’s not too many people…then the risk [of aerosol transmission] is actually fairly small,” says Daniel Bonn, co-author of the new Physics of Fluids study and an engineering professor at the University of Amsterdam.

Bonn’s study found that aerosol transmission was most likely to occur in enclosed, poorly ventilated places. Very small spaces, like public elevators and bathrooms, were the riskiest, while larger, better-ventilated places, like office buildings, were fairly safe. Bars, restaurants and private homes are likely somewhere in between.

What about quarantine pods?

Some people have formed quarantine “pods” by picking a few close friends or family members to see indoors, while cutting out nearly all other in-person contact. This can be a good system, Thielen says, as long as you’re very clear about ground rules. “You have to know that the people within your pod are not having 10 other pods that they’re getting together with,” Thielen says.

There’s no exact threshold at which a pod gets too big, Hennessy says, but smaller is always better. Each person you add to the group increases the chances of someone having a risky encounter and exposing others. Before you start or expand your pod, it’s also a good idea for everyone to quarantine for a couple weeks and get tested to ensure nobody is unknowingly infected.

Can my kids see their friends?

Early in the pandemic, some studies suggested children are unlikely to catch and spread COVID-19, leading some parents to carry on with indoor playdates. While it’s true that kids are much less likely than adults to develop severe cases of coronavirus, they can and do catch and transmit the virus, as recent studies and case reports have shown. “There are certainly enough well-documented cases of kids transmitting that we should generally be exercising the same precautions as for older family members,” Thielen says.

“Even more than adults, kids are comfortable being outside,” Thielen adds. Take advantage of their resilience by setting up (short) outdoor playdates, even when the weather gets snowy.

Can I see family for the holidays?

Any indoor gathering is risky this year, no matter who you’re seeing or for what purpose. Even for holidays, small, masked gatherings are safest.

If you decide to have prolonged visits with relatives—particularly if they’re elderly or otherwise vulnerable—Hennessy recommends first getting tested, isolating for at least a week and then getting tested again to confirm the negative result. “One test isn’t enough, really,” he says.

The equation gets even more complicated if you have to travel to see family. Though airplanes do have good air filtration systems, Hennessy says it’s still risky to sit shoulder-to-shoulder with lots of other people, potentially for hours. For that reason, people traveling for the holidays should aim to get tested pre- and post-trip, ideally with about a week of isolation after getting off the plane or train. If the logistical headache of isolating for a week post-flight is too much, this may be a year to skip holiday travel, Hennessy says. 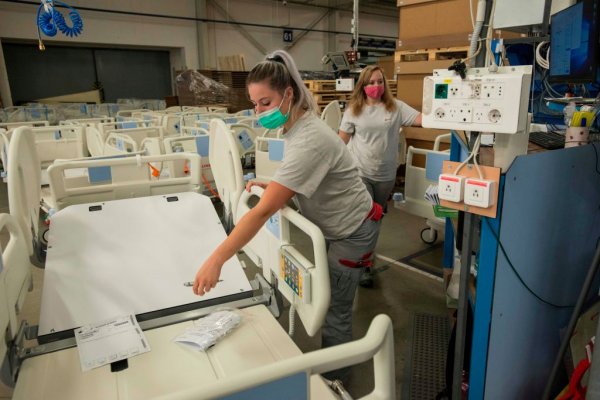 Europe's Second Wave of COVID-19 Is Being Driven by Two Countries
Next Up: Editor's Pick