On Oct. 21, early voters line up outside of the Judge Black Annex polling location in Parkersburg, W. Va
Stephen Zenner—AFP/Getty Images
Ideas
By Jonathan Bush and Tom O'Neill
Jonathan Bush is Executive Chair of Firefly Health. Tom O’Neill is CEO of O’Neill and Associates. Both companies have pledged to A Day for Democracy

When one of us was volunteering for George H.W. Bush’s primary campaign late in 1987, he learned an uncomfortable truth. “GB,” as we called him, was my uncle. We were in the process of phoning voters and determining who to prioritize and call. Those we called “GB1s” were committed to my uncle, so we were told we should not waste our time calling them – they were already sold. “GB2s” were leaning toward my uncle, so we should call them. “GB3s” and “GB4s” were undecided and not enrolled, and we were under no circumstances to spend our limited time calling them. Andy Card and Ron Kaufman, senior campaign officials, were our wise men; they explained to me that the cost of reaching and converting “GB3s” and “GB4s” was too high and therefore it was not worth the effort to contact given them how unlikely they were to vote.

On the other side of the political aisle, Tip O’Neill’s vision of democracy was pretty simple – you ask people for their votes and you deliver on your promises. The origin of his famous political axiom – “all politics is local” – came from his first unsuccessful run for the Cambridge City Council. He lost by a mere 150 votes and was told by one voter, a longtime friend, that she hadn’t voted because he didn’t ask her to. What my father learned is that you have to pay attention to what is going on in your backyard to win the trust of the people you want to serve. It’s a lesson he never forgot, even while going toe-to-toe with President Ronald Reagan as Speaker of the House.

Throughout both of our lives, we’ve seen the frustration that our families’ campaign staff had when it came to converting non-voters into active voters. Most importantly, we’ve experienced up close and personal the uncomfortable reality that too many Americans don’t vote.

We need to stop taking our democracy for granted. Only 56 percent of the U.S. voting age population cast ballots in the last presidential election. In fact, voter participation in presidential races hasn’t gotten above 60 percent for more than 50 years. And we all know that this year’s election presents even greater challenges; COVID-19 has upended the usual “Get Out the Vote” efforts and has forced Americans to create detailed voting plans. During a time when it could not be more important for Americans to exercise their right to vote, many are finding more obstacles to doing so.

As CEOs of companies for a combined five decades, we have known for a long time that our responsibility to civic engagement – and our democracy – doesn’t end with ourselves. In fact, because we’re the bosses, it’s up to us to ensure that our colleagues have the resources and time they need to exercise the most basic, but most important, action that an American citizen can take: to vote.

As employers, one barrier to voting we can remove is the challenge of voting on a workday. No American should feel that their job is a barrier to exercising their right to vote. That’s why “A Day for Democracy” and other groups are calling on employers to help make it easier for the people who work for them to vote and to help educate their employees on ways they can vote as well. For many, the barriers to voting can be too difficult to overcome– worrying about getting home to their kids or making sure a loved one is taken care of or being late to work in the morning if the voting line is too long. It’s up to us, as business leaders, to ease those burdens.

The United States is the oldest continuously functioning democracy in the world, but our democratic norms are only safe if each generation ensures that they remain so. Right now, those democratic norms are being challenged, and while we can argue from across the ideological aisle why that is, we must all agree that we have an obligation to vote if we are able and to help others to vote. Voter participation isn’t and shouldn’t be about partisanship.

We all must recognize that employers have an appropriate role to play in helping to preserve our democratic traditions by encouraging the people who work for them to fulfill their civic rights as citizens– this year and in years to come. If all politics is local, so is all democracy.

So, in the spirit of our families, we’re personally asking other CEOs and business leaders to join us in this effort. Let’s increase voter participation. There is still time to do your part.

The original version of this story misstated Ron Kaufman’s name. It is Ron, not Rob. 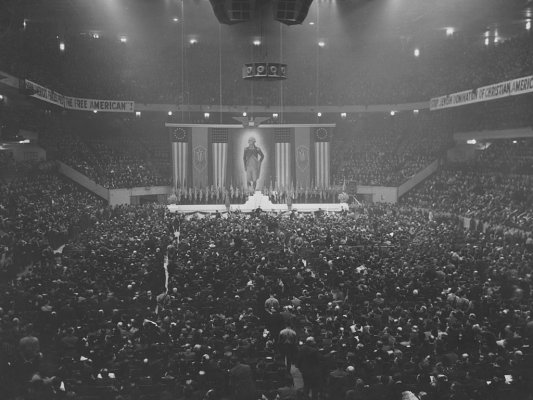 Did America Really Have a 'Good Relationship' With Hitler?
Next Up: Editor's Pick