Going into the home stretch of the 2020 presidential election, President Trump has seized on an unusual political tactic: take credit for the return of Big Ten football to appeal to sports-crazy voters in key Midwestern swing states.

When conference officials announced Aug. 11 that they would postpone the football season due to the COVID-19 pandemic, Trump slammed the decision, lobbying publicly for a return to the gridiron. On Sept. 16, Big Ten officials reversed course. The season opener, between Illinois and Wisconsin, kicks off Friday night, and tomorrow will see a full slate of games. For the President, it’s a chance to spike the football before fans in crucial Electoral College states. “We got Big Ten open,” Trump told sports journalist Jason Whitlock in an interview released on Thursday.

But the play hasn’t worked very well, according to a new poll from Arizona State’s Global Sport Institute that was shared exclusively with TIME.

The survey of undecided voters who identify as college football fans and live in closely contested Midwest swing states with Big Ten schools or other key states found that just 2% of this cohort would be “much more likely” to vote for Trump because he’s claimed credit for Big Ten football’s return. Another 7% said they’d be “somewhat more likely” to vote for him.

But whatever gains Trump appears to have made among this small subset of the electorate were mostly offset by those turned off by his boasting: 7% of those surveyed said Trump taking credit for the Big Ten restart made them “much less likely” or “somewhat less likely” to vote for Trump. In the end, 84% of respondents said the Big Ten strategy had no effect on whom they will support.

The poll, by OH Predictive Insights, a non-partisan public-opinion research company, surveyed 400 registered voters who identified as undecided college football fans in Midwestern battleground states with Big Ten schools—Iowa, Pennsylvania, Michigan, Wisconsin, Ohio, and Minnesota—as well as the battleground states of Florida, Arizona and Nevada. (The poll has a 4.9% margin of error and was conducted between Oct. 14 and Oct. 21.)

Mike Noble, managing partner and chief pollster at OH Predictive Insights, questions the efficacy of Trump’s strategy of claiming credit for the return of college football during the waning weeks of the campaign. “It’s not moving the needle,” Noble says. “It’s not effective. And frankly, if I was their internal team, I’d be like, stop talking about it.”

The results surprised Noble, a former political consultant and campaign manager. “I actually thought it would have had a bit more of an effect,” Noble says. He figured more of them would be cheering Trump for his role—real or perceived—in the restart. “I feel like if I’m a college football fan, I’m saying, ‘right on.’ This is great.”

Read More: College Football Feels All Too Normal During The Pandemic

In truth, Trump had little to do with the Big Ten restart. (He also claimed credit for the Pac-12’s decision to play a season: schools will kick off an abbreviated schedule starting Nov. 7.) While Trump did speak with Big Ten commissioner Kevin Warren in early September and applied public pressure to change course—”Play Football Big Ten!” he tweeted on Aug. 31—Big Ten administrators and school presidents have gone out of their way to credit improvements in testing, rather than presidential hectoring, for the reversal.

“For me, it wasn’t about political pressure, money, lawsuits, or what everyone else was doing,” said Northwestern University President Morton Schapiro, chair of the Big Ten Council of Presidents and Chancellors. “It was the unanimous opinion of our medical experts that evolved over the course of weeks.”

That hasn’t stopped Trump from taking a marathon victory lap. “It was dead, it was totally dead,” Trump told Fox Sports Radio’s Outkick The Coverage with Clay Travis on Sept. 17. “And I told my people, look, we got to call, I say, who am I going to call, who’s the head of it? And, it was Kevin Warren who really turned out to be very open about it.”

At the first presidential debate, during a discussion about the economy, Trump pivoted to the talking point. “By the way, I brought back Big Ten football,” he said. “It was me, and I’m very happy to do it. And the people of Ohio are very proud of me.” On Oct. 20, Trump said on Fox & Friends: “I’m the one that got Big Ten and Pac-12 football back. You know, I got that back. That wasn’t coming back. And I got it back. Hope people realize that. That was pure and simple me, or whatever.”

The poll also provided insight into what the country thinks about a question at the intersection of sports and politics. While some fans have criticized athletes for speaking out on political issues—“stick to sports,” the refrain goes—they’d also prefer that the reverse hold true: that politicians stay in their lane.

Researchers asked these undecided voters if they agreed or disagreed with following statement: “It is appropriate for elected officials to become involved in the nationwide start/stoppage of sporting events.” Only 5% strongly agreed; 18% agreed somewhat, and 39% were ambivalent.

“It looks like the same fall in the middle type of thing,” says Ken Shropshire, CEO of Arizona State’s Global Sport Institute. “This doesn’t do anything for me.” 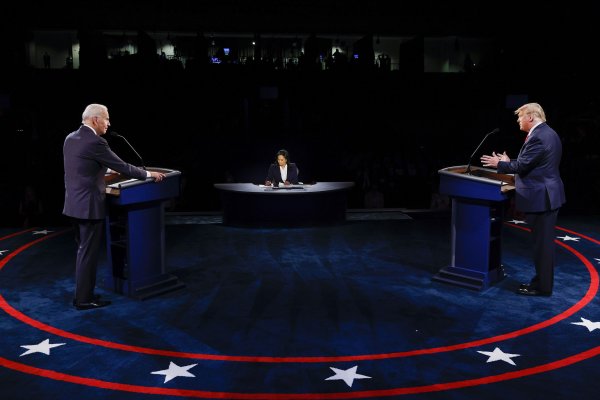 A Better Debate, but Does It Matter?
Next Up: Editor's Pick