Explicit photos and emails purportedly belonging to Hunter Biden were circulating in Ukraine last year at the same time that Rudy Giuliani was searching for dirt there on former Vice President Joe Biden, two people approached about the material during that period tell TIME.

The emails’ alleged availability, which has not been previously reported, comes to light in the wake of Giuliani’s recent claims that he obtained private photos and emails of Hunter Biden from a broken laptop abandoned in Delaware. Giuliani, who is President Donald Trump’s personal lawyer, has passed this material to right-wing news outlets, which began publishing it last week. Giuliani did not respond to requests for comment on the origins of the material he obtained.

Over the past year, the practice of selling or leaking private communications has become so common in Ukraine that the government has announced plans to pass a law against it. Igor Novikov, a former adviser to Ukraine’s President who now researches disinformation, referred to the practice as Ukraine’s “national sport” in a recent interview with the Washington Post.

The two people who said they were approached with Hunter Biden’s alleged emails last year did not know whether any of them were real and they declined to identify who was behind the offers, the first of which came in late May 2019 and the second in mid-September 2019. The two people said they could not confirm whether any of the material presented to them was the same as that which has been recently published in the U.S.

Last week the New York Post began publishing the material they obtained from Giuliani, and the sources and authenticity of the published emails has been hotly debated ever since. Hunter Biden and his father’s presidential campaign have declined to comment on the leaks in detail or to address whether any of the published emails are genuine. Hunter Biden has been unable to figure out where the material could have originated, says a person familiar with the situation.

Over the past week, Trump has used the leaks from Giuliani to fuel his claims of corruption against the Biden family. The President called on Attorney General William Barr to appoint a special prosecutor to investigate the material in the recent reports. “We’ve got to get the attorney general to act,” Trump said in an interview with Fox on Tuesday, two days before he faces Biden in the final debate of the presidential race. “He’s got to appoint somebody. This is major corruption, and this has to be known about before the election.”

One mystery that has surrounded Giuliani’s effort to aid Trump’s re-election bid is the original source of the photos and emails he has leaked to the New York Post. No other news organization has been able to verify the contents of the leak. The Biden campaign, along with U.S. national security officials and social media platforms, have warned that the leaked files could include forgeries meant to confuse or mislead voters in the final weeks of the campaign. Experts on disinformation have also raised serious concerns about the leaks.

The two people who said they were approached about Hunter Biden’s photos and emails last year did not know whether they originated from the same source as those that Giuliani has since leaked to the media. When the New York Post first published photos of Hunter Biden last week, “It brought back memories of the same information that was being introduced to us a year ago,” says the first person informed about the existence of this material.

In an interview with TIME, a second person described an offer that was made to him in Kyiv, Ukraine’s capital, in mid-September 2019. This person declined the offer, he says, and only recalled it in detail when familiar-looking material was published in the New York Post last week. This person alleges that the people offering this material had a buyer in mind for it: they said they wanted to sell it to Republican allies of President Trump. Their asking price was $5 million, he says, adding: “I walked away from it, because it smelled awful.”

In its first report about Hunter Biden on Oct. 14, the New York Post published what it described in a headline as a “smoking gun email” dated April 2015 between Hunter Biden and an adviser to Burisma Holdings, the Ukrainian gas company where Hunter Biden held a lucrative board seat while his father was Vice President. The email, whose authenticity could not be independently confirmed, appeared to suggest that the adviser, Vadym Pozharskyi, had met and “spent some time” with Joe Biden, thanks to an introduction from Hunter Biden. If the alleged meeting took place, it would seem to undercut the repeated claims from Biden and his son that they never discussed Burisma.

The Biden campaign has denied that any such meeting happened. Amos Hochstein, who served as an adviser to Joe Biden on Ukrainian affairs in 2015, said the then-Vice President did not attend a meeting with Pozharskyi. “He never met with Biden. Never,” Hochstein tells TIME.

During his travels in Europe last year, Giuliani met with a variety of Ukrainian politicians, businessmen and former law enforcement officers whom he has since described as “whistleblowers” and witnesses to the Biden family’s alleged corruption in Ukraine. None of the accusations these sources made via Giuliani has stood up to public scrutiny, and no evidence has emerged of wrongdoing by Joe Biden in Ukraine.

When TIME asked Novikov, the former adviser to Ukraine’s President, about the alleged offers of access to Hunter Biden’s emails, Novikov said it would be “nothing new” for someone in Ukraine to market such material. The trade in kompromat—a Russian word for “compromising material”—has gone into overdrive in Ukraine since last year, when the country became entangled in internal U.S. politics, especially during the impeachment inquiry against President Trump, Novikov says. Various political operatives have rushed to answer Giuliani’s call for dirt on the Bidens, creating what Novikov called a “catalyst for disinformation.” Any documents emerging from this trade should be treated with caution, he adds, because they are “extremely hard to verify, yet very easy to fake.”

Since the New York Post began publishing the purported emails and photos of Hunter Biden, federal investigators have tried to determine where the emails came from and whether they are linked to a foreign effort to influence the U.S. elections, according to an NBC News report published Oct. 15.

At the end of last year, Russia’s military intelligence service, known as the GRU, hacked into the computer systems of Burisma, the Ukrainian gas company, apparently aiming to steal its internal documents and communications, according to a report released by cyber security experts in January. “It is significant because Burisma Holdings is publicly entangled in U.S. foreign and domestic politics,” wrote the experts from Area 1, a cyber security firm that was co-founded by a former hacker for the U.S. National Security Agency. The January report warned that the hack of Burisma could be an “early warning” of Russia’s plans to interfere in the 2020 elections using the same techniques it used in 2016.

During a trip to Ukraine in December, Giuliani met with a Ukrainian lawmaker who has since been identified by the U.S. Treasury Department as an “active Russian agent” with longstanding ties to Russian intelligence services. The lawmaker, Andrii Derkach, did not respond to messages seeking comment.

In a social media post on Monday, Derkach claimed that the “scandalous investigation” published in the New York Post would soon have a sequel based on a “second laptop” purportedly containing the private emails and photos of Hunter Biden. “The facts confirming international corruption are stored on a second laptop,” Derkach wrote. “These are not the last witnesses or the last laptop.” 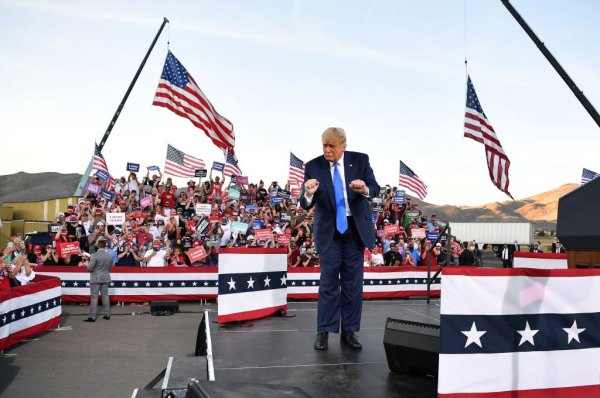 With Dwindling Time to Turn the Race Around, Donald Trump Taps into Positive Thinking
Next Up: Editor's Pick