We All Think History Will Be on Our Side. Here's Why We Shouldn't Rely on That Assumption

A worker cleans the Churchill statue in Parliament Square that had been spray painted with the words 'was a racist' on June 8, 2020 in London.
Dan Kitwood—Getty Images
By Priya Satia

Among Americans desperate for release from the era of Trump, one particular thought has often proved a consolation. Historians in the future, they prophesy, will look back and judge President Trump an abysmal president. It is a secular hope hallowed by the faint outlines of religious belief: the idea of comeuppance, karma, a vindicating day of judgment somewhere in the future. History will do justice.

This hope for historical vindication is loud now but not new. Indeed, it is an ethical outlook that has itself had historic impact, shaping the actions of countless people in the modern period. But as that past shows, a sense of history oriented towards future redemption has inspired not only moral courage in the face of great oppression, but also the moral recklessness of oppression itself.

Progressive thinkers like the late Congressman John Lewis, “the conscience of Congress,” acted out of such an impulse and exhorted us, too, to be on the “right side of history.” He saw this as a moral obligation; we are accountable to our descendants and must be able to show them that we contributed to history’s progress. This was history understood as “a very, very long road toward freedom, justice for all humankind.” His posthumous essay in the New York Times this summer closed by calling on readers to act in a manner that would let future historians “say that it was your generation who laid down the heavy burdens of hate at last and that peace finally triumphed.” Vice President Biden’s speech at the DNC in August 2020 took a similar turn, employing a prayerful subjunctive: “May history be able to say that the end of this chapter of American darkness began here tonight.” He builds on President Obama’s frequent allusions to the importance of being on “the right side of history.”

But the idea that history will judge can be used rhetorically by any side in a contest. Who doesn’t think they’re on the right side of history? This summer, in pushing back against Trump Administration policies, China’s president Xi Jinping assured business executives that his government was “on the correct side of history.” And indeed, Trump’s supporters too anticipate history’s condemnation of those who oppose him.

By deferring moral judgment to the future, this view of history as a source of future judgment enables people to act in a manner that they know to be morally dubious according to their present judgment. Many an avowedly great man has claimed, like Napoleon, that historic destiny put him beyond the ordinary moral world. The strongmen of our time are cut from precisely this cloth.

Indeed, the idea of history’s judgment first emerged to guide the “great”—an idea iconically captured in Lin-Manuel Miranda’s portrait of the heroic George Washington admonishing the aspiring great man Alexander Hamilton, “History has its eyes on you.” Enlightenment philosophers of that era believed that God did not actively intervene in human affairs, but that history nevertheless unfolds according to His Providence. Even seemingly evil events thus conduced toward ultimately benevolent ends. The great must further its fulfillment by studying earlier great lives, thereby also becoming conscious of history’s prospective judgment of their own lives.

When Obama invokes the “arc of history,” he is invoking this providential conception of history. It is his shorthand for the quote associated with Martin Luther King Jr. that the “arc of the moral universe is long, but it bends toward justice,” which King adapted from the sermon of a mid-19th century abolitionist minister. King recognized the inspirational force of such future-oriented belief: “Everything that is done in the world is done by hope,” he told us.

But modern history is strewn with harmful acts justified as serving some higher historical purpose. Everything from luxury to war to slavery itself has been rationalized as a “necessary evil” with a part to play in history’s divinely guided unfolding. For example, the British knowingly resigned themselves to imperialism’s destructive effects precisely out of faith in its providential role. “It is by its…unintended influence that the British power metamorphoses and dissolves the ideas and societal forms underneath it,” explained the historian and jurist Henry Maine after the British brutally crushed an Indian rebellion in 1857. “Nor is there any expedient by which it can escape the duty of rebuilding upon its own principles that which it unwillingly destroys.”

The Victorian historian J. R. Seeley declared history “the school of statesmanship.” Belief in historical judgment would teach young men to suppress sentiment—to maintain that proverbial stiff upper lip—in the face of the necessarily destructive force of progress, even the wiping out of entire peoples. The historian-policymaker Winston Churchill was the apotheosis of this type. “I do not admit…that a great wrong has been done to the Red Indians of America or the black people of Australia…by the fact that a stronger race…has come in and taken their place,” he insisted in 1937. In his view, even the most painfully violent present-day loss was justified—indeed, fated—in history’s inevitable march toward a preordained future.

Facing the devastating effects of this future-oriented ethical vision, anticolonial thinkers have called for restoration of ordinary ethics, doing what is right simply because it is right, without regard for some future payoff. King and Lewis borrowed the idea of nonviolent practice from Mohandas Gandhi, but shorn of its anti-historical challenge to empire. While the two Americans often invoked the future, Gandhian nonviolence called on humans to be morally accountable in the present rather than engage in morally dubious acts for the sake of some future vindicating effect. To Gandhi, “civilization” was simply an ethical way of being, available to all of us right now, not the endpoint of some historical process. The Indian poet-philosopher Mohamed Iqbal condemned European abandonment of “the universal ethics of Jesus” in favor of future-oriented ethics. The purpose of human agency was not to shepherd the world in a particular direction but to improve the self. History is not about progress in this outlook; it is the unending flux of life through which a person strives to redemptively transcend his humanity.

In Britain, too, the historian Herbert Butterfield disputed the foundation of what he dubbed the “Whig Interpretation of History”—that historians’ job was to retrospectively dispense moral judgments upon people and actions. World War II put even greater strain on the progress narrative. The devoutly Christian Butterfield echoed Iqbal in arguing that “the purpose of life is not in the far future” but “here and now,” and that, if history had a meaning, it lay in “something in each personality considered for mundane purposes as an end in himself.” The historian and activist E. P. Thompson affirmed from a socialist humanist perspective: “Our only criterion for judgment should not be whether or not a man’s actions are justified in the light of subsequent evolution.”

Nevertheless, the idea that history is about retrospective judgment remained popular, thanks to the Cold War. Prominent American historians and policymakers remained committed to a liberal vision of history as progress, seeing the spread of American power in much the same light as the British had seen theirs. They hailed the end of the Cold War (rather prematurely) as historic vindication, pronouncing the “end of history” itself. The idea of history as progress sustained the other side, too. Marxism shared liberalism’s presumption that history was headed, inevitably, towards a liberatory end. In 1959, Che Guevara described his sense of his “historic duty,” an “absolutely fatalistic” sense of mission that “strips me of all fear.” He saw himself as a revolutionary fulfilling the laws of Marxist historical theory.

Our present discontents, from climate change to white supremacy movements to the pandemic, are compelling fresh skepticism about the presumption that “history” is the story of U.S.-led progress. In 2015, the Pope called on us to abandon our “irrational confidence in progress” and stressed the connection between nature, inner peace and social justice. We would do better to listen to today’s historians in order to understand how we got here and recover other guides to conscience, not just look to future historians for consolation. Instead of deferring judgment to time, let us attend to the core of Lewis’s message, which is to do what our ordinary moral compass tells us is right, in the moment, but without the calculus of future effect. We may find that recovering that kind of ethical accountability might even make better history in the end.

Priya Satia is the author of Time’s Monster: How History Makes History, available now from Belknap Press, an Imprint of Harvard University Press. 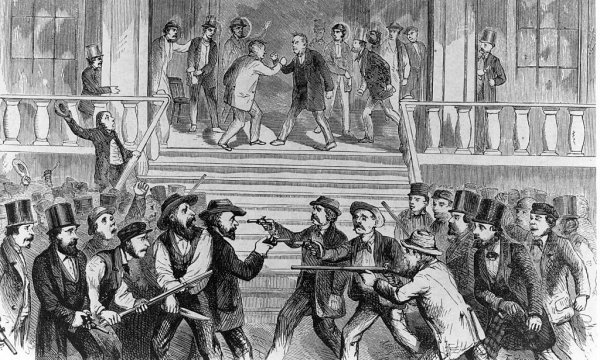 The Threats That Faced U.S. Democracy Before the Civil War Are Back
Next Up: Editor's Pick