Trump's Instinct to Attack Helped Win Him the White House. Now It May Be His Undoing

President Donald Trump’s campaign is ramping up the pace of the President’s travel, preparing to hold three rallies a day next week. But Republican strategists warn that more Trump isn’t what the campaign needs right now. What he needs, they say, is to stick to the script — something the President is not wired to do.

As Trump trails former Vice President Joe Biden in national polls, his obsession with dominating the news cycle, airing grievances, and sowing confusion has made it hard for him to turn around those numbers with the independents, women and seniors who have all been leaving him in recent weeks. At an event on Oct. 16 in Fort Myers, Florida, billed as “Protecting America’s Seniors” Trump interrupted his own description of efforts to lower drug prices to call the Bidens “an organized crime family,” and unspool a long ramble of unsubstantiated allegations about Joe Biden’s son Hunter influencing U.S. policy in Ukraine.

Republican pollsters and voices inside his campaign want him to sharpen his re-election pitch in the closing weeks to claw back into the race by talking about boosting jobs and preventing Democrats from adding justices to the Supreme Court. But Trump’s message is a muddle. In Thursday night’s NBC News interview and town hall, Trump didn’t hit any of those notes hard, instead wading further into controversy by doubling down on his skepticism of mask wearing to curb the coronavirus pandemic, spreading baseless allegations of widespread mail-in voter fraud, and refusing to denounce the false QAnon online conspiracy theory that Democrats are running a secret pedophile ring.

This was Trump’s political novelty in 2016: he could say the outrageous, change the subject, turn attention to his opponent’s weaknesses. It was a tactic that helped get him to the White House. But with so much chaos characterizing this year, voters are looking for stability and clarity on how candidates are going to turn things around, strategists say. Trump isn’t built to provide that kind of reassurance. In fact, it’s long been his strategy not to.

Instead, weeks before Election Day, Trump is giving rambling speeches, begging women to vote for him or the suburbs will burn, tweeting oddball memes that insult seniors. His loudmouth performance during the first debate hurt his numbers. His COVID-19 diagnosis and recovery didn’t bring a bounce. Vice President Mike Pence’s handed his boss an opening to talk about Democrats trying to stack the Supreme Court after his own debate performance, but Trump drowned the message the next day by complaining about the second presidential debate’s terms and launching a dozen other shiny distractions on Twitter.

Trump’s lack of discipline comes as his campaign is burning through money to defend him in states he easily won four years ago. It’s a politically fragile window that calls for clarity and precision, but Trump appears incapable of rising to the moment. Campaign staffers have prepared messages on Trump’s tax cuts, trade deals, farm subsidies and his record of job creation before the pandemic, but Trump rarely sticks to the script.

Now Republican senators are getting increasingly nervous about losing their majority because of Trump’s lack of focus. On Wednesday, Iowa Senator Chuck Grassley Tweeted at Trump that he should start his stump speeches by reading off a notecard five things he’s accomplished that sets him apart from Biden, then “say whatever” he wants.

Trump needs to “stop whining about people picking on him or trying to steal the election,” says long-time Republican strategist Charlie Black. “What he’s got to do is talk about the economy, talk about packing the Supreme Court and little else,” says Black. Trump can continue to talk about law and order, but he needs to do so in a tone that reaches women voters, Black says, adding that he can’t win unless he starts pick up more women voters, who, while interested in public safety, “don’t like macho style combat.”

When Trump faces Biden again on the debate stage on Oct. 22, Black says “he needs to have a good debate. Not a shouting match, but a regular debate.” There’s still time to turn things around, he says, even with the surge of early votes that have already been cast. “If he did all that, we’ll have a close race,” Black says.

Today, the race doesn’t look close. Biden’s campaign war chest is brimming over with donations. In battleground states, the number of Biden ads are swamping Trump ads by two-to-one and three-to-one in some places, says Travis Ridout, a political science professor at Washington State University. “These are some pretty big imbalances,” he says, and Biden’s advantage “has to account for at least some of [Biden’s] expanding lead in the polls over the past few weeks.”

Trump himself publicly acknowledges he’s got a likeability problem. “So can I ask you to do me a favor? Suburban women, will you please like me, please, please?” he told a rally in Pennsylvania’s steel country on Oct. 12. “I don’t have that much time to be that nice. I can do it but I got to go quickly.” A few days earlier, Trump acknowledged to Rush Limbaugh that he may lose the election “because they’ll say I’m not a nice person.”

But Trump has spent a long time polishing his tough guy persona, and he may not need to change it to win. An ad that ran during the World Series last year described Trump this way: “He’s no Mr. Nice Guy but sometimes it takes a Donald Trump to change Washington.” His campaign has been built from the start on supercharging Republican turnout and not trying to broaden his appeal. In mid-October 2016, he trailed Clinton in the polls only slightly less than he trails Biden now. He still could close the gap. Biden’s campaign manager Jen O’Malley Dillon wrote on Twitter Wednesday that the Biden campaign thinks the race is closer than the conventional wisdom. “Like a lot closer,” she wrote.

Some Republican strategists think that because Trump won in 2016 when the political establishment told him he was certain to lose, he now only trusts his own instincts. “He was told in 2016 he wasn’t going to win. He won. Therefore he thinks he’s a political genius,” says a Republican strategist who is consulting on Senate and House races that are facing a possible Democratic wave. “He thinks everything he touches turns to gold and his instincts aren’t that good,” the strategist says. The Trump campaign, he adds, is “floundering.”

The last hope, says Black, is that Trump will rein himself in in the final two weeks. In the final stretch of 2016, Trump largely stuck to the teleprompter. “Kellyanne Conway went to him about two weeks out and said ‘We’re catching her, you got a real chance to win this, but here’s what you’ve got to do, and he did it,” Black says. “I’m hoping Kellyanne or his family or someone is giving him a similar message right now. But I don’t think so.”

Trump did not display that kind of discipline during Thursday night’s town hall. Instead, the President leaned into his signature combativeness, willingness to accept conspiracy theories and spread falsehoods. Trump refused to acknowledge any missteps on the pandemic, and falsely claimed a study concluded that 85% of people who wear masks contract COVID-19. When NBC’s Savannah Guthrie asked Trump to denounce the QAnon conspiracy theory, Trump first said he didn’t know about it. Then he said he knew the group is strongly “against pedophilia,” and so is he.

Trump’s supporters like him the way he is and often say that his rough edges give him an authenticity they don’t see often in polished politicians who parse their words carefully. Trump’s campaign advisor Mercedes Schlapp tweeted that the Biden town hall that aired at the same time Thursday on ABC, felt like watching an episode of Mister Rogers’ Neighborhood. For his critics, that’s exactly the point. “Just imagine turning on the TV, seeing your president, and feeling your blood pressure go down instead of up,” Pete Buttigieg, Biden’s former opponent for the Democratic presidential nomination, wrote on Twitter Thursday night.

One voter during Thursday night’s town hall surprised Trump by complimenting him on his smile. Paulette Dale was introduced as a registered Republican who voted for Hillary Clinton in 2016 and is leaning toward Biden. “I have to say, you have a great smile,” Dale told Trump. “You’re so handsome when you smile.” After this compliment, Dale asked him why he curtailed the Deferred Action for Childhood Arrivals program that made it possible for people brought to the country illegally as children to stay and work. Trump lied and said it had been curtailed because of the pandemic, which is not true.

After the town hall, Dale told the Miami New Times that she wished Trump would smile more and talk less, echoing a line from the musical Hamilton. The President, she said, “steps in it every time he opens his mouth.” 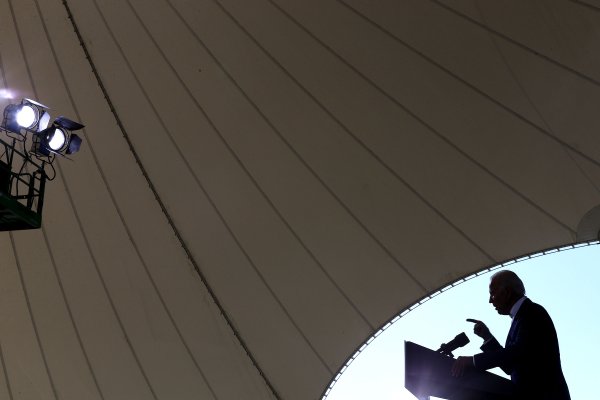 Joe Biden Goes After President Donald Trump's Edge on the Economy—And It's Working
Next Up: Editor's Pick