Last night was a political spectacle that only 2020 could have provided. The presidential candidates were in different cities, on different networks and seemingly on different political planets as they appeared in dueling town hall-style events instead of the scheduled second presidential debate that the incumbent boycotted.

It was not what any of us thought we’d be watching when the debate dates were announced back in October of last year. Instead of trading ideas and insults face-to-face, President Donald Trump and former Vice President Joe Biden took up perches in television studios in Miami and Philadelphia. From afar, they made their cases to Americans, at least 15 million of whom have already cast ballots with a little more than two weeks to go in this election.

Trump, who announced he tested positive for COVID-19 after the first debate on Sept. 29, declined to participate in what was supposed to have been its sequel. The debate organizers decided to make the event a tele-debate, keeping the candidates and moderator away from each other out of health concerns. After Trump rejected the new format and Biden instead booked his own event with ABC, Trump availed himself of a standing invitation with NBC at the same time slot.

Campaigns for President are often described as the most unforgiving job interview on the planet, with voters the ultimate H.R. chief. Some of those voters were given the opportunity to ask the applicants tough questions during the concurrent sessions and press for answers about what their lives would be like for the next four years.

But in their answers, it was as though the two candidates were applying for two different jobs — and sometimes in two vastly different Americas. In Trump’s America, Antifa is burning down cities, Democrats are limiting freedoms by blocking super-spreader events and his $400 million in personal debt is totally normal. In Biden’s, normalcy is possible, decency the ideal and societal reform possible with the right-minded government programs.

Throughout the evening, Trump appeared defensive, insisting he deserves another four years based on the economy before the pandemic. He promised a vaccine for the coronavirus is coming any day and blamed everyone but his own administration for all that ails the country. He professed he didn’t know about the group QAnon, then said he applauds its goal of fighting pedophilia, and then did his level best again to profess ignorance. Up North, meanwhile, Biden criticized the President for not forcefully condemning hate and extremism on his watch. He cast Trump as an irresponsible steward of the country and a danger to America’s standing around the globe.

Hanging over both socially distanced events was the coronavirus, which has now claimed more than 213,000 American lives and infected 8 million in total. Trump, who was airlifted from the White House to Walt Reed two weeks ago today, said he had beaten the virus but refused again to disclose whether or not he had pneumonia or whether he had followed the rules before the last presidential debate and tested negative. Biden, for his part, offered that he had been tested earlier Thursday and was following the strictest protocols to keep those around him safe. (That still may prove impossible; the top spokeswoman for his running mate has tested positive and Kamala Harris has shelved immediate plans to travel to campaign.)

The strange split-screen evening was an embodiment of an unpredictable campaign that has been upended by the pandemic. While Trump is holding mass — and largely unmasked — rallies and sending volunteers to knock on a million doors or more a week, Biden has scaled back what was supposed to have been a frenetic fall of campaign events. In a reversal of expectations, Trump’s campaign finance reports show Biden outpacing him in September, something that almost never happens to an incumbent President. Trump has pulled $17 million in planned television and ads from airwaves in Iowa, Ohio and New Hampshire while Biden seems to be surging in state and national polls.

We’ve got a little more than two weeks to go before voting ends. If this year has taught us anything, it’s that we should condition ourselves to abandon expectations that the past is prologue. Last night’s dueling non-debates were merely the latest installment of a norm-defying election that seems to have the two contenders fighting to lead two very different nations. 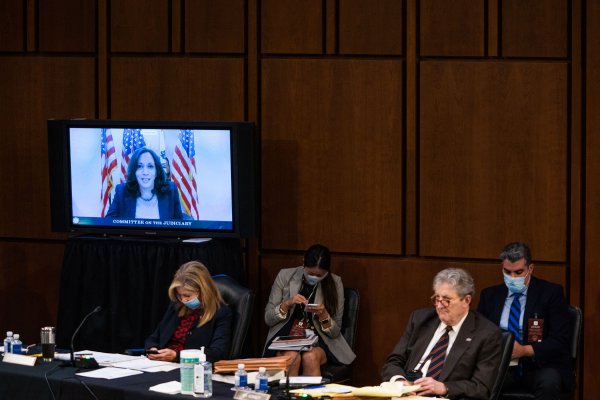 Kamala Harris Summons Her Prosecutorial Instincts
Next Up: Editor's Pick