How Does Your COVID-19 Risk Tolerance Compare to Others?

After a long spring and summer of shuttered restaurants, grounded flights and empty theaters, most states have gradually allowed at least some establishments to reopen, usually in limited capacity alongside a variety of new safety measures. While many Americans have leapt at the opportunity to enjoy these nearly forgotten old luxuries, others remain more cautious, particularly as COVID-19 infections are once again rising at alarming rates in some parts of the country. Every day, we are all forced to recalculate the wisdom of reentering a world that is, if far from completely reopened, at least left cautiously ajar.

We all have a different and constantly-shifting degree of risk tolerance when it comes to the tricky business of deciding whether to go out, eat out, or travel. To help determine your personal threshold and see how you compare to others, TIME has developed an interactive quiz that simulates three widely permitted but potentially risky activities: Going to the movies, taking a flight and eating at an indoor restaurant.

For each scenario, you’ll see a diagram of the space and the number of other people in attendance, along with a description of safety measures being taken. As you go, we’ll gradually increase the number of other patrons until you decide the environment is too crowded for comfort. At the end, you’ll see your risk tolerance score, and how it compares to others who have taken the exercise.

In developing this simulation, TIME partnered with Friedrich Götz, a personality and geographical psychologist at the University of Cambridge (Götz was instrumental in designing the questions for several of our previous research-based quizzes, including our scientific Harry Potter Sorting Hat quiz.) Each scenario is based on extensive study of both the seating dimensions and layout of these spaces and the extra safety measures that have been implemented. In the airplane scenario, for example, the seats are set at distance, or “pitch,” of 30 inches from the seat ahead or behind, a common allotment for coach class on major airlines. The dimensions of the plane itself resemble the Boeing 737 and Airbus A320, two jets commonly used for short- and medium-distance commercial flights.

The placement of other people in the simulations are determined by a TIME-developed algorithm that models a person’s hypothetical desire to sit as far away from others as possible while also, in the case of groups, remaining together when feasible. In the movie theater simulation, for example, some audience members attend by themselves while others arrive in randomly determined clusters of between two and four people, who attempt to sit together if there is an available span of seats. Every time a new individual or small party joins the scene, each available seat or table’s relative risk is recalculated based on its proximity to every occupied seat.

The notion of risk tolerance is of extreme relevance to business owners and corporations who, after a devastating few months, need to attract as many customers as possible this fall and winter without putting them in any avoidable danger or pushing the boundaries to the point that they scare off would-be patrons. Insisting that everyone wear masks, while essential, isn’t enough to allay the ever-present anxiety many of us feel right now whenever a situation feels overcrowded or otherwise dangerous. As evidence, consider the ubiquity of disinfectant wipes at so many establishments, in spite of the fact that the virus is far more likely to be transmitted from person to person rather than via contaminated surfaces.

For those users who kindly allow us to anonymously record their responses—which is optional and has no bearing on their results—we also hope to gain some insight into how local rates of COVID-19 infection and two common risk factors (age and gender) affect a person’s willingness to visit public spaces with varying numbers of other people. This personal decision process, which we will only report in aggregate, affects everything from economic recovery to who will win the 2020 presidential election based on how many people show up on Election Day.

There is never any shame in erring on the side of staying in, particularly for those considered to be at high risk or who live in areas with skyrocketing rates of new cases. Nor is there any fault in pining for social interaction, not to mention a meal that isn’t prepared by microwave. As for which prerogative takes precedence, it’s a line we all have to draw somewhere and adjust daily. 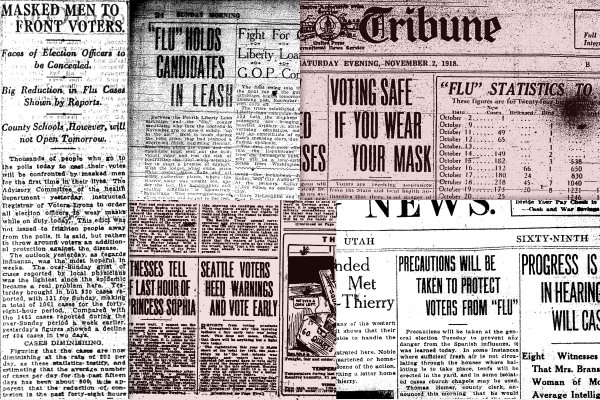 How Does a Pandemic Shape an Election? A Lesson From 1918
Next Up: Editor's Pick