In the final weeks of the presidential campaign, Joe Biden has taken aim at one of President Donald Trump’s longstanding strengths with a closing message that he would be a better steward of a shaky American economy.

In a series of speeches in battleground states, Biden has consistently touted his “Build Back Better” platform to create millions of jobs through government spending, his plans to repeal Trump’s tax cuts on the wealthy and big corporations, and his ideas for creating a 21st century workforce by investing in green jobs and a caregiving workforce. It’s a message designed to cut into Trump’s longstanding edge with voters on the question of who they trust to manage the economy—a core issue in every election, but especially in the midst of a pandemic-driven recession.

It appears to be working. In a CNN poll released Oct. 6, Biden and Trump were in a statistical dead heat on the question of who would better handle the economy: 50% of likely voters said Biden, while 48% said Trump. When CNN asked the same question to registered voters in May, Trump led by 12 points.

There are also signs that Biden’s economic message is resonating on Wall Street and in the broader business community. The Democratic nominee has raked in five times as much from the finance sector as the Republican President, according to the Center for Responsive Politics: people who work in securities and investment have donated nearly $51 million to Biden’s campaign and affiliated groups, compared to just over $10 million to Trump’s. Economic forecasters from Oxford Economics to Moody’s Analytics to Goldman Sachs have issued reports in recent weeks concluding that Biden’s economic plans would create jobs and lead to stable economic growth. And even though the stock market has soared during Trump’s term, investors aren’t balking at the prospect of a Biden presidency.

“Many in business dreaded an outcome where the Democratic Party controls both houses and they put in a very progressive platform of aggressive regulation, higher taxes, and other business unfriendly stuff,” says Lloyd Blankfein, the former chairman and CEO of Goldman Sachs, who has donated to both Democrats and Republicans. “But at this point, the unpredictability and volatility of the Trump administration have made people’s heads spin enough to make it six of one, half a dozen of the other.”

Concerned investors, Blankfein says, “are not jumping off a bridge if Biden gets elected, because they’re sick of what we have at this point.”

What we have at this point is more than 12.6 million Americans out of work, including 900,000 who filed joblessness claims in the last week; an unemployment rate of nearly 8%; and a President whose government-by-tweet approach has left Wall Street with a case of whiplash. Biden is trying to capitalize, positioning himself as a steady alternative. While Trump spent his town hall on Thursday night feeding fringe online conspiracy theories, Biden gave a sober rundown of his economic plans, boasting that Moody’s Analytics, the nonpartisan financial firm, had concluded that his plans would create more jobs than Trump’s.

“When you allow people to get back in the game and have a job, everything moves,” Biden said. “Right now, you’ve got the opposite.”

Biden isn’t pivoting away from the “Restore the Soul of America” message he’s had since the beginning of the Democratic primary. But during the final stretch of the campaign, he’s focused on bread-and-butter economic issues as a corollary, arguing job creation is key to restoring American dignity and prosperity. This one-two punch was clearest in a speech in Cincinnati on October 12: “What we need in America is leadership that seeks to deescalate tensions, to open lines of communication, and to bring us together, to heal and to hope,” Biden said, adding: “But it’s also about jobs. Good-paying jobs.”

In a series of events in battleground states over the last month, Biden has zeroed in on this theme. He has touted his work saving manufacturing jobs during the 2009 auto rescue, linked Trump’s failure to curb COVID-19 to lost jobs, and trumpeted his economic recovery proposal.

“We’ll create millions of good paying jobs, union jobs in manufacturing and technology,” he said in Erie, Penn., on October 10. Two days later, in Toledo, Ohio: “The Trump presidency will be the first presidency in modern American history to leave office with fewer jobs than when it began.” The next day, in Miramar, Fla., he noted that “folks are worried about making their next rent or mortgage payment, whether or not they can purchase their prescription or put food on the table.”

In ordinary times, a spending plan like this might raise hackles. But these aren’t ordinary times. “I think if Biden were President and he gets something pretty close to what he’s proposed, the economy would end up in a much better place than if we have the status quo,” says Mark Zandi, chief economist at nonpartisan Moody’s Analytics, who has donated to and advised both Democrats and Republicans. Zandi co-authored a recent report finding that “the economic outlook is strongest” if Biden and the Democrats gain the White House and the Senate, with the economy on track to create 18.6 million jobs and the average American gaining $4,800 in after-tax income.

Trump, who began the year planning to make a boom market and low unemployment a campaign centerpiece, has argued he is best positioned to rebuild an economy devastated by a pandemic he did not cause. “This election is a choice between Trump recovery at a level that nobody’s ever seen before, and a Biden depression,” the President said in a speech on October 14. “You will have a depression the likes of which this country has never seen before.”

Yet few analysts appear to see a Biden Administration as an economic threat. Oxford Economics concluded that Biden’s fiscal proposals would give the U.S. economy “a booster shot” as it recovers from the pandemic. The Penn-Wharton Budget Model, led by Kent Smetters, who served in President George W. Bush’s Treasury Department, found that by 2050, the Biden proposals would decrease federal debt by more than 6% and increase GDP by 0.8% compared to current law. The American Enterprise Institute, a right-leaning think tank, concluded that Biden’s tax proposals would affect only the top 5% of earners and would raise $2.8 trillion in federal revenue while reducing GDP 0.16% over the next decade.

Analysts at Goldman Sachs were optimistic that a Democratic wave in November could lead to more stimulus early next year as well as spending that could offset tax increases on corporations and high earners, they wrote last week. And analysts from the global investment firm UBS concluded that Biden’s steady lead has reduced uncertainty in the election outcome, which is good for the markets: “Investors may have initially feared a Blue Wave,” they wrote in a note published last week. “But a delayed or contested election outcome is even more unsettling.”

“I think the mainstream of economic thought among academics, practicing economists, and most Wall Street economists is that the proposals Biden has put forward are what need to be done right now given current circumstances,” Zandi says. “It’s tailor made for the situation that we’re in.” 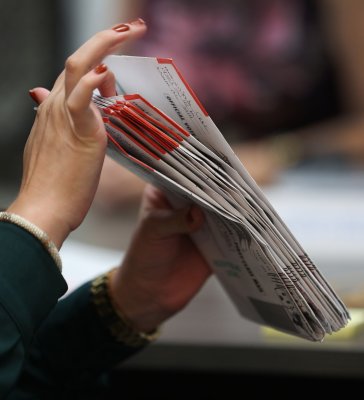 Here's How to Fix Issues With Your Mail-In Ballot
Next Up: Editor's Pick