The United States Postal Service’s inspector general is investigating the agency’s failure to update at least 1.8 million changes of address in a national database in August, just as many states were preparing to send out mail-in ballots for the November election.

“We are conducting a review,” Agapi Doulaveris, a spokeswoman for the inspector general’s office, said in an email to TIME, which first disclosed the data breakdown two weeks ago. She declined to provide any additional details on the scope of the inquiry or whether any findings might be made public before the Nov. 3 election.

The inquiry adds to the pressure facing Postmaster General Louis DeJoy and the Postal Service after a summer of damaging news. Controversial cutbacks in some mail services prompted critics to accuse DeJoy of meddling with the mail service to slow mail-in ballots and help President Trump. Several federal judges have moved to block the changes as politically motivated, and DeJoy has been forced to retreat on his plans, which he said would improve efficiency.

The Postal Service had no comment on the opening of the inspector general’s investigation. The watchdog audited the change-of-address system in 2014, criticizing inadequate confidentiality protections for more than 13 million mail users. The new investigation is politically sensitive because of President Trump’s attacks on mail-in voting and the impact on the postal service’s ability to deliver a record number of mail-in ballots on time.

In a letter sent to DeJoy on Friday, 19 Democratic senators demanded answers about the August failure in the Postal Service database, which is known as the National Change of Address Linkage, or NCOALink. “With voters already casting ballots across the nation, such failures are unacceptable and require immediate action,” wrote the lawmakers, led by Senators Jacky Rosen of Nevada and Gary Peters of Michigan, both members of the Homeland Security and Governmental Affairs Committee.

The senators questioned why the Postal Service and its 400 election mail coordinators did not inform state officials about the problems in its change-of-address system. They also demanded to know when DeJoy found out about the breakdown and questioned his pledge in Senate testimony on Aug. 21 to ensure on-time delivery of all election mail.

DeJoy’s testimony came amid the database failure, which led to the omission of at least 1.8 million changes of address for people who had moved from Aug. 10 to Aug. 30. The postal service says it corrected the problem Sept. 14, after a number of vendors who use the database noticed a dramatic downturn in new changes of address.

It remains unclear what impact the database failure could have on voters who moved in August getting mail-in election ballots and material at their new addresses. At least 43 states, plus the District of Columbia, use the database to verify and update voter rolls. The error left some states scrambling to correct errors in their voter lists just as ballots were being sent out, or sometimes afterward.

The Postal Service has not explained what caused the massive omissions, describing it only as an “error” in emails it sent to its private vendors, who use the data for commercial as well as government business. The postal service told TIME that the error was not the result of any changes in policy or practice, but determining the exact cause was one of the issues that the Democratic senators pressed DeJoy about in their letter.

A Postal Service spokesperson, Kimberly Frum, said that officials would respond directly to the Democratic senators. “The U.S. Mail remains a secure, efficient and effective means for citizens and campaigns to participate in the electoral process,” Frum said.

–with reporting by Alana Abramson/Washington 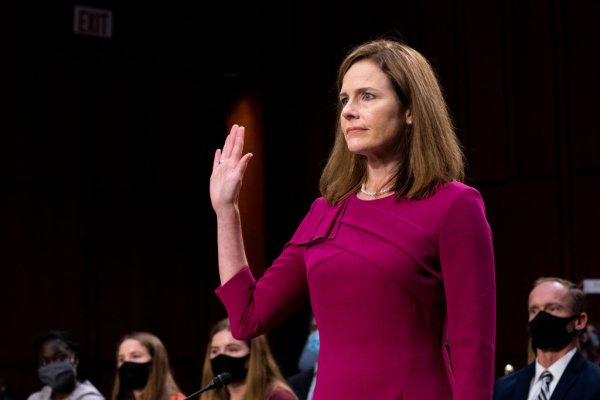 Democrats Focus on Health Care as Barrett Hearing Begins
Next Up: Editor's Pick