This week’s vice presidential debate was a face off not only between Vice President President Mike Pence and California Senator Kamala Harris, but a head-to-head matchup of two ways of understanding the United States’ COVID-19 pandemic. As Pence framed it, the Donald Trump Administration had been dealt a bad hand, but has risen to the challenge in a way Harris and her running mate, former Vice President Joe Biden, could not have. Meanwhile, Harris declared the Trump Administration’s response as “the greatest failure of any presidential administration,” pointing to the 210,000-plus deaths and more than 7.5 million infections in the U.S. so far as evidence.

These divergent narratives underscore just how far apart Americans overall have become in their interpretation of the pandemic—and the idea that people are increasingly rejecting reality for their own preferred set of facts. As an Oct. 8 poll of 9,220 Americans conducted by the Pew Research Center between Aug. 31 and Sept. 7 by reveals, Democrats and Republicans are sharply divided on how well the U.S. has done in fighting COVID-19. They’re also split on whether the outbreak was as big of a deal as it has been made out to be. Moreover, they’re paying less attention to the crisis overall, even as it shows signs of worsening once again.

While a majority of Americans overall (61%) agreed that the U.S. hasn’t controlled the outbreak as well as it could have, that belief breaks down starkly along party lines: 88% of Democrats and Democrat-leaning Americans agreed, compared to just 30% of Republicans or those who lean Republican. Republicans and Republican-leaning Americans were also far more likely (66%) than all U.S. adults (39%) to say that the coronavirus outbreak has been blown out of proportion, as President Trump has repeatedly suggested.

That Republicans may not be taking the coronavirus outbreak as seriously as Democrats could help explain a past poll by Gallup, which found that Republicans are less likely to follow the U.S. Centers for Disease Control and Prevention’s guidance and wear a face mask to slow the spread of the virus. That survey, conducted in June and July, found that 94% of Democrats always or very often wore a face mask, compared to only 46% of Republicans.

The new Pew survey found that Republicans are not a monolith, however. Republicans and Republican-leaning Americans who named only Fox News or talk radio as their major source for political news were more likely to say the U.S. has done what it could to control the virus’ spread (90%), compared to others who watched those stations in addition to other mainstream sources (62%).

Broadly speaking, Republicans and the Republican-leaning were also less likely (26%) than Democrats and the Democrat-leaning (44%) to say that they’re paying “very close” attention to coronavirus news in the recent poll. Americans overall have been paying less attention to COVID-19 news lately—51% were keeping a very close eye on things back in March, while only 35% were doing the same by September. That may speak to the phenomenon of “pandemic fatigue,” suggesting people are tiring not only of the outbreak-related headlines, but also of measures like wearing masks, social distancing and so on—a potentially dangerous sign as we head into what increasingly looks to be another wave of COVID-19 in the fall and winter. 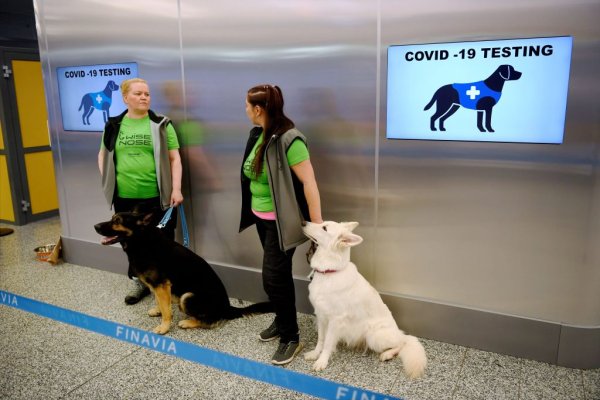 How Scientists Are Training Dogs to Sniff Out COVID-19
Next Up: Editor's Pick