As Belarus’s largest and most sustained opposition protests in decades continue, a 73-year-old veteran activist and grandmother has emerged as one of the movement’s iconic figures.

In August, a video of Nina Baginskaya pushing past two masked riot policemen went viral on social media. “I’m going for a walk,” she told the officers, while holding the disputed Belarusian national flag that originates from the country’s independence. Dictatorial leader Alexander Lukashenko has long considered the flag —a red horizontal stripe between two whites— as a symbol of national opposition to his rule and its public display has often led to arrest.

Baginskaya, a former geologist born when Belarus was still under Soviet rule, has become the unlikely hero of the tens of thousands rallying across the country protesting disputed elections on Aug. 9 that gave Lukashenko, Europe’s longest serving leader, a sixth term in office.

Officially, Lukashenko won 80.1% of the vote and his main rival, Svetlana Tikhanovskaya, a political newcomer and former teacher, only 10.1%. She rejected the outcome, insisting that she would have won support ranging from 60% to 70% had votes been properly counted.

Protestors accuse the president of rigging the vote to extend his 26-year rule over the former soviet country and are calling for new elections. They have been met with brutal treatment by police and security forces. More than 10,000 people, including Baginskaya, have been detained and more than 500 accounts of torture by state agents have been documented by the Minsk-based human rights group, Vyasna.

Despite several European countries, including the U.S. and Canada refusing to recognise the election results as legitimate, Lukashenko was sworn in during a secret ceremony on Sep. 23. The U.K. and Canada on Sep. 29 became the first major western powers to introduce sanctions—travel bans and asset freezes—against Lukashenko, his son and other senior officials over the fraudulent election and violence toward protestors.

Baginskaya, who was born in Minsk in 1946, was forced to retire from her career as a state geologist for her involvement in the fight for Belorussian independence. Now a matriarch of a family that spans four generations, she spoke to TIME on Oct. 1 about her experience protesting and hopes for the future:

What has pushed you to protest?

I have been arrested and fined for my activism many times beginning in 1988 until today. These experiences pushed me to protest. Ordinary people cannot allow reprisals against them, their family and friends. But repression is still taking place in our country. I think that everyone must express their opinion.

I’m protesting because of the police brutality. My family could be targets [Baginskaya has two children, two grandchildren and one great grandchild]. Large numbers of people are taking to the streets and are doing what I’ve been doing for the past 30 years. And they won’t stop until there is a change in leadership. People cannot be slaves to the government. The president must listen to the people. The authorities need a functioning parliament and civil society. I never supported Lukashenko. I believe in people like Svetlana Tikhanovskaya who want to protect the country’s culture and uniqueness.

I tell the police that they need to serve the people and not a government that is ordering them to crack down on the protestors. The authorities have taken 50% of my pension in fines. They’re trying to deter other people from going out to protest. When I was younger, police detained me for three days in isolation. Recently they have been holding me for three hours. I laugh because they’re wasting their strength on an old person like me.

How has the behaviour of the police changed since you started protesting?

Overall I think it has gotten worse. In the past, the authorities were more secretive about the opposition activists who were imprisoned, went missing or killed. Now they openly use violence against protestors and don’t seem to even care how other countries react. They beat young and old people alike—everyone who has protested against the falsified elections. I’m mostly worried about young people. Old people have lived their lives, but young people should have the chance to live theirs fully.

What are your hopes for the protests?

People protesting include those from the president’s administration who understand how dangerous Lukashenko can be. Some police officers have left their posts because they don’t want to obey orders that go against the protestors. They understand that he is not doing any good for the country. We’re on the right path and I think we’re going to win.

Many people have called you an icon of the opposition protests—what do you think about that?

I’m not the only one who goes to demonstrations. Some of my friends are dead, others are ill and cannot protest. But I can still take part. I don’t want to be elevated and be like Lukashenko, who thinks a lot of himself. I’m an ordinary person, I want to live, work and do good things.

-With reporting by ANNA PILIPENKA/BERLIN 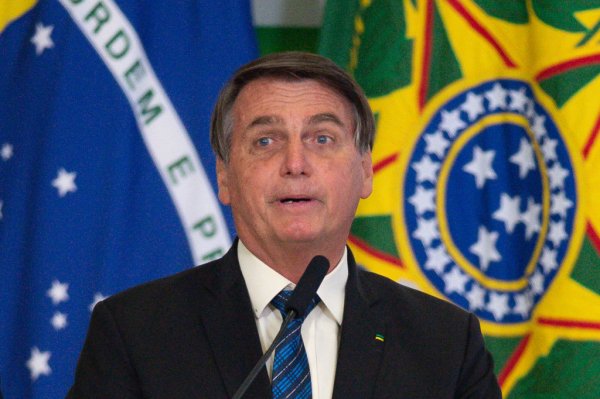 How Britain and Brazil Coped With Their Leaders Falling Ill
Next Up: Editor's Pick