The Armenia-Azerbaijan Fighting Could Spiral Into A Larger Regional Conflict

A man walks by a house that was damaged during clashes in the Tartar district bordering the Nagorno-Karabakh region, on Sept. 29, 2020.
Tofik Babayev—Xinhua/Getty Images
Ideas
By Ian Bremmer
Bremmer is a foreign affairs columnist and editor-at-large at TIME. He is the president of Eurasia Group, a political-risk consultancy, and GZERO Media, a company dedicated to providing intelligent and engaging coverage of international affairs. He teaches applied geopolitics at Columbia University’s School of International and Public Affairs and his most recent book is Us vs. Them: The Failure of Globalism.

Intense fighting has erupted in Nagorno-Karabakh, a small enclave in the southern Caucasus mountains, setting the entire region on edge. This is a fight primarily between Armenia and Azerbaijan, two former Soviet republics with long-held grievances over land, but the involvement of Russia, Turkey, and others raises the stakes for where a war might be headed.

In essence, this is a story of a powerful outsider changing history by drawing arbitrary lines on a map that would later spark conflict. The states of Armenia and Azerbaijan were pulled into Moscow’s orbit and became part of the Soviet Union in the 1920s. Though Nagorno-Karabakh, a mountain region about the size of Delaware, was dominated by Armenians, Soviet mapmakers made it part of the Azerbaijani Soviet Republic. For decades, Armenian complaints about the region’s status were ignored, and in the final days of the U.S.S.R., war erupted. Tens of thousands were killed, and more than one million were forced from their homes.

A Russian-brokered ceasefire in 1994 left Nagorno-Karabakh as part of Azerbaijan, but ethnic Armenians, with backing from the Armenian government, drove most Azerbaijanis from the territory and declared it an independent republic. Low-level fighting has continued over the years, and an eruption of violence in 2016 killed at least 200 people. There is no peace treaty, and nothing has been resolved.

In recent years, the governments of Armenia and Azerbaijan have sent positive signals. Azerbaijan’s president and Armenia’s prime minister opened the first-ever military hotline between the two countries in 2018, and talks brokered by Russia, France, and the United States produced a joint statement in 2019 that appeared to set the stage for a treaty. But momentum was lost, and an eruption of fighting this summer led to popular demand in both countries for a military reckoning. We’ll likely never know who fired the shot that ignited these latest clashes, but dozens of soldiers and some civilians have been killed. Armenia and Azerbaijan have each declared martial law. Outsiders are scrambling to put out the fire. U.N. Secretary General Antonio Guterres has called for a ceasefire.

The web of foreign ties in this story is complicated. Turkey’s president Recep Tayyip Erdogan, eager for any opportunity to boost his popularity and shift the subject from his country’s struggling economy, fully backs his fellow Turkic Muslims in Azerbaijan. While others call for talks, Erdogan insists that “Azerbaijan must take matters into its own hands” to end Armenia’s “occupation” of the disputed region. Vladimir Putin’s Russia has maintained good relations with Azerbaijan and sold weapons to both countries, but Russia has a military base in Armenia and is bound by treaty to defend Armenia in war. This means that, as in Syria and in Libya’s ongoing civil war, Russia and NATO-member Turkey have opposing interests here.

Iran, which borders both Armenia and Azerbaijan, has offered to mediate. Politically active ethnic Armenian populations in both France and the United States bring those governments into the push for negotiations. Adding to the sense of urgency to halt the fighting, Nagorno-Karabakh is a corridor for pipelines that transport oil and gas from the Caspian Sea to the international marketplace.

If the current clashes explode into full-blown war, the damage could be much greater than in the 1990s. This war would be waged with 21st century heavy weapons provided by Russia and Turkey. Erdogan vows his country will only become more involved. There are more than 100,000 civilians caught in the current crossfire. Europe and the United States will again call for a halt to the fighting, but both are distracted with bigger problems closer to home.

It’s yet more evidence that William Faulkner was right: “The past is never dead. It isn’t even past.” Especially when powerful people have reasons to keep it alive. 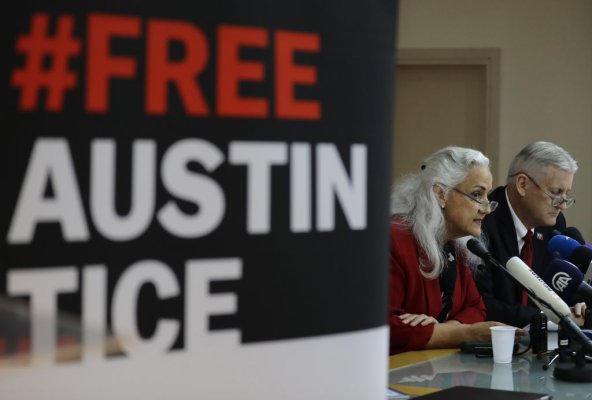 My Brother Austin Asked Me to Go to Syria With Him. Four Months Later, He Was Taken.
Next Up: Editor's Pick