Andrew Weissmann, a Top Mueller Hand, Tells TIME What It Was Like Investigating Trump

Andrew Weissmann, who served as one of Robert Mueller's top lawyers in the special counsel's investigation into the 2016 election, in New York, Sept. 21, 2020.
Hilary Swift—The New York Times/Redux
By Philip Elliott

Until now, the work of Robert Mueller and his team of investigators has been communicated in careful, parsed words in a sprawling report that carried a lot of seemingly damning facts without explicitly rendering a verdict on President Donald Trump and those around him. Now, for the first time, a member of Mueller’s high command is making plain what the elite prosecutors had hoped America would draw from their probe into the Trump campaign, its work with Russians determined to meddle in the 2016 elections and the White House’s efforts to muddy the waters.

In an interview with TIME about his new book, Mueller’s loyal lieutenant Andrew Weissman talks through the messy months of investigations of Trump and his team, navigating the perilous moments of political intrigue, the decision not to compel the testimony of Trump and his family, and what, ultimately, Weissmann sees as unfinished work. Weissman handled the prosecution of Trump’s former campaign chief Paul Manafort, but his book also recounts the work of teams looking at Russian meddling and Trump’s potential obstruction of justice.

Asked directly if a subpoena of Trump would have altered the course of the impeachment trial, Weissmann seemed to hold deep regrets. “No one knows,” he told me on Saturday. “We don’t know what it would have uncovered. We don’t know if it would make a difference. But my answer is we shouldn’t have to ask that question. We shouldn’t have to be in a position having to speculate about that.”

The book, Where The Law Ends: Inside the Mueller Investigation, is out tomorrow.

Below is an edited version of our chat.

Philip Elliott: The book reads like a love letter to future historians. It’s an accounting from inside of this really difficult moment in American history. But history is, at its core, an argument about what happened and why. In the time you’ve had since the investigation wrapped up, has there been a moment when you’ve revised your understanding of your own history about what happened and why?

When I was talking to publishers, the lead editor at Random House essentially asked me a version of that question, which was: Do you have enough distance? I had sort of partially processed what I lived through and the process of writing the book gave me a lot more distance to be able to reflect. What I was trying to do is just to record it and what it was like to be investigating the President and the Russian attack on our country for 22 months and what were the challenges. And also holding up a mirror to what we did and trying to be as clear as I could be about what I thought we did well and where I personally would have done things differently.

Why didn’t Bob Mueller write this?

He is notoriously tight-lipped. I quote him saying something he says all the time, which is: “You live by the press, you die by the press.” There is also a side of him, which is to be completely forthright about what happened, be honest about what problems you see and then figure out how to fix them. I don’t expect that he’s going to speak publicly about it. But one of the things that I tried to suggest in the book is that there is a different model for going forward as to what can be expected of a special counsel and just on a personal level.

You repeatedly say in this book that your hands were really tied about what can be done with what you found. No President can be indicted while in office. You obviously disagree with this. But have we reached a point where, given what we know now, it’s time to revise this? Is it time for Congress to step in?

That issue of whether a sitting President can be charged is one that is ultimately has to be decided by the courts. So Congress can weigh in to say what its view is, and that may have some value with the court. But I don’t think ultimately it is a congressional call. I think that is a legal call.

You made me revisit the Mueller report while I was reading your book. You make a really interesting point here that when the Office of Special Counsel found that when the President was not guilty, the report said so explicitly. But when you think he might have been guilty, you guys left that hanging. That requires an awful lot of a lot of work on the part of the consumer of the report. Did you think that the readers of the ultimate Mueller report we’re going to pick up on that nuance?

So, the situation that we were in was that Bob Mueller, for very altruistic reasons, thought that the report should not say that the President had committed a crime unless he was going to be charged. And that comes from the concern that you speak through an indictment and the person that has their day in court and can defend themselves. That led to a problem there because we all agreed while there was evidence with respect to Russia attacking the 2016 election, there was insufficient evidence to be able to charge beyond a reasonable doubt in that particular area.

With respect to volume two, which deals with the obstruction of information. We internally discussed this conversation with our legal team. My own personal view was that our report under the Special Counsel rules was an internal DOJ document that was supposed to go to the Attorney General, and we were tasked with making a recommendation. So we were not tasked with making the decision of making the report public and dealing with that issue. Should you be saying publicly whether the President committed a crime or not? We were under the Special Counsel rules as doing this internally. So my view was: Let’s just stay within our lane and do what we were just told to do, which is give our recommendation — that there was sufficient proof to find that the President had obstructed justice.

As someone who puts a lot of faith in DOJ in terms of its independence and doing its best to get everything right, I have to say the case files you inherited on Manafort, as you describe them, didn’t inspire a whole lot of confidence. It sounds like a mess there. Is that the norm of what DOJ is working on?

I don’t think it is the norm. The plus side was that they had identified a very promising lead and a very promising way to look at the evidence. The downside was that it had been going on for over three years. Mueller is always saying, “Don’t play with your food” and “move faster.” You know, that sort of pace is not a Mueller pace.

The thing that gets me about this whole thing is what we still don’t know. The contents of your debrief with Mr. Manafort, when he was playing footsie with you guys, still remain under seal. At what point do we get to know everything you know? Will we ever know what you know?

Eventually you would think that everything that I know will come out, except if something is under investigation or if there’s something of a sort of classified nature that would hurt our national security.

One thing that was not fully disclosed, but now is in my book, is this thread that we pulled when Manafort came in or kept on giving a base of answers with respect to a tens of thousand dollars that were paid by a third party to his law firm for legal fees. And we kept on asking about it and the story kept on changing. Each time we asked and we, of course, were interested in tracing his assets. There was what could only be termed as a kickback scheme where the head of the pack was getting 6% of the total amount of money that was under management.

In the book, you address the speculation about Mueller’s health, and you say you never saw it hurt his ability to make tough calls. But was this the man you worked for in three different jobs?

So let me, let me address that in two ways. Director Mueller on the Special Counsel investigation was part of every key decision. Everything went to him and there were meetings where he would in his characteristic way make a quick decisive decision.

And the other way I would put it is this way. He was just as annoying in his role at the Special Counsel’s Office as he was when I dealt with him in the Bureau. I mean that in a good way, which is he was a dog with a bone and just would ask relentless questions.

It’s clear you have a disagreement with how the final report came together. I mean, there’s that scene where you talk about this is not the report that you would have submitted if you were in charge. What would have been different?

You offered your resignation at several points.

Absolutely. Because I didn’t want to be a distraction. I still have trouble talking about it. [Weissmann was among those branded by the President as one of the “Angry Democrats” investigating him.]

Did Congress get impeachment right, based on what you know?

You close the book with this flourish: “As one small witness to history, I now know the death of our democracy is possible. Fixing it is possible, too.” Given everything we’ve been through in 2020, do you still believe that to be the case?

Why are you so optimistic?

I don’t view that as optimistic. It’s because you have a country that is capable of making decisions to restore their rule of law. And there’s an enormous group of people who like me were raised with that view. There’s going to be a lot of work because there’s such huge divisions in the country. But I’m not sure I view the end of my book as completely optimistic. It’s just saying there is this ability to turn this around. 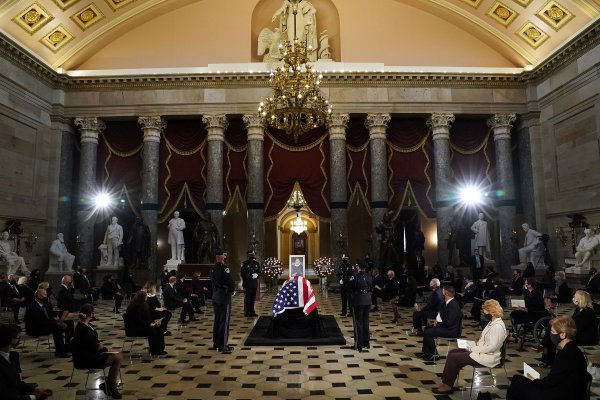 Washington Bids Farewell to Ginsburg
Next Up: Editor's Pick