In the midst of a pandemic and with the fate of the Affordable Care Act pending before the Supreme Court, attention should focus on what Justice Ginsburg’s replacement by someone who is likely to be very conservative will mean for health care. Justice Ginsburg was a strong voice and a consistent vote to provide the federal government the power to ensure health insurance for all and especially to protect women’s reproductive health.

The Supreme Court first assessed the constitutionality of the Affordable Care Act (ACA) in National Federation of Independent Business v. Sebelius (2012), a few months before the 2012 presidential election. One aspect of the ACA that was challenged was the so-called “individual mandate,” requiring individuals to purchase health insurance or pay a special tax. The requirement was designed to prevent a downward spiral on the health insurance market if only sick people were enrolled (thus raising the costs associated with providing care for the enrolled group) and if healthy people had an incentive to stay uninsured until they needed care. Insurance markets only work when there is a mix of people who do and do not need the benefit at any one time.

Over the objections of four conservative justices, the Court upheld the individual mandate in an opinion by Chief Justice John Roberts, on the grounds that it was a valid exercise of Congress’ taxing power. But Roberts joined with the other conservatives to make it clear that Congress could not have imposed these regulatory requirements by relying on the parts of the Constitution that have justified most federal regulation over the past eighty years.

Justice Ginsburg’s opinion challenged this limited view of federal power. “The provision of health care is today a concern of national dimension,” she wrote, “just as the provision of old-age and survivors’ benefits was in the 1930s.” To say now that Congress has no power to create a scheme to increase access to healthcare “makes scant sense and is stunningly retrogressive,” harkening back to an era before the New Deal “in which the Court routinely thwarted Congress’ efforts to regulate the national economy.”

What she highlighted was the rise among today’s conservative justices of a view of national power that questions the very legitimacy of most New Deal and Great Society policymaking. She reminded us that “In the early 20th century, this Court regularly struck down economic regulation enacted by the people’s representatives in both the States and the Federal Government,” including minimum wage laws and anti-child labor laws, and pointed out that the vision of federal power outlined by the five conservatives bore “a disquieting resemblance to those long-overruled decisions.”

Conservative activists and judges have continued their assault on the ACA. After Congressional Republicans repealed the ACA’s tax penalty in December 2017 a coalition of Republican state attorneys general went into federal court and argued that the repeal should make the entire ACA unconstitutional because the Court in Sebelius upheld the law only on the basis of Congress’ taxing power. The law’s defenders argue that by repealing only one part of the law Congress intended that the remaining elements still be in force, and that federal courts should not require a complete repeal when Congress only acted to change one piece. In fact, in December 2017, Congress rejected President Trump’s request to repeal the entire ACA.

This is what is at issue in California v. Texas, which the Supreme Court will take up one week after election day. Justices Thomas and Alito made their view clear in Sebelius about Congress’s lack of power to pass the ACA, and it is safe to assume that Justices Gorsuch and Kavanagh share the same hostility to federal power.

If, as now appears probable, another conservative justice joins the Court before November, then it is very likely that more than 20 million Americans will lose health coverage immediately during a national health crisis, another 12 million could lose Medicaid coverage, a whopping 133 million Americans with preexisting conditions could be disqualified from buying a health insurance policy or cause them to pay significantly higher premiums, and 165 million Americans would no longer be protected by caps on expensive treatments. If this happens it would be on the basis of a long-ago discredited, but recently revived, theory of limited congressional power, which Justice Ginsburg singled out for criticism.

But this is not the only way in which the next justice will impact Americans’ access to healthcare. In Burwell v. Hobby Lobby Stores (2014) the Court’s conservatives, for the first time in American history, held that the religious beliefs of a business’s owner allowed that business to refuse to provide employees with a benefit required by law. The ACA required employers to provide health-insurance coverage that would include coverage for contraceptives for women. The ACA carved out an exemption for religious not-for-profit organizations (such as a Catholic diocese), but not for purely secular businesses. Nevertheless, the majority found that a religious person who owned a business should not be required to provide employee benefits that violated the business owner’s religious believes.

Justice Ginsburg’s dissent exposed the extraordinary implications of such an accommodation. “Suppose an employer’s sincerely held religious belief is offended by health coverage of vaccines, or paying the minimum wage, or according women equal pay for substantially similar work?” She asks what is to be done about “employers with religiously grounded objections to blood transfusions (Jehovah’s Witnesses); antidepressants (Scientologists); medications derived from pigs, including anesthesia, intravenous fluids, and pills coated with genatin (certain Muslims, Jews, and Hindus); and vaccinations (Christian Scientists, among others)?”

In a political system that relies so extensively on employer-based health insurance, the Hobby Lobby case leaves millions of Americans vulnerable to restrictions on health care that their employers do not agree with. The Trump administration has gone even further and said that all employers who have a religious or conscience objection to contraception may refuse to provide such coverage to women employees. In June, in Little Sisters of the Poor v. Pennsylvania, the Court held that this was consistent with the Affordable Care Act.

Justice Ginsburg wrote a powerful dissent, that was joined by Justice Sotomayor, stressing the importance of contraceptives for women’s health and for their equal participation in the workforce and society. “In accommodating claims of religious freedom,” she wrote, “this Court has taken a balanced approach, one that does not allow the religious beliefs of some to overwhelm the rights and interests of others who do not share those beliefs.” She lamented: “This Court leaves women workers to fend for themselves, to seek contraceptive coverage from sources other than their employer’s insurer, and, absent another available source of funding, to pay for contraceptive services out of their own pockets. The Constitution’s Free Exercise Clause, all agree, does not call for that imbalanced result.”

As a woman born in the depression, who saw the ravages of illegal abortion before Roe v. Wade, Ruth Bader Ginsburg was a powerful voice on the Court, even in dissent, for health care. It is frightening to think what a justice from the opposite end of the political spectrum will mean for health care, and especially women’s health, in the United States. 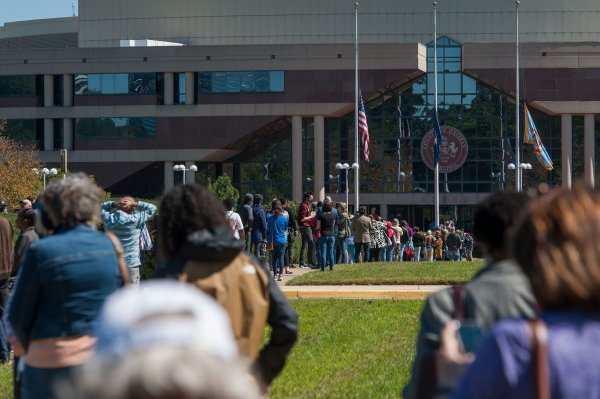 We Must Be Ready for Election Night
Next Up: Editor's Pick