Cindy McCain poses for a portrait at her home in Phoenix, Ariz. on April 29, 2019.
Dominic Valente—The Washington Post/ Getty Images
By Philip Elliott

To anyone who has watched Cindy McCain and her uneasy navigation of the political realm — and President Donald Trump’s hostility toward her family — her endorsement of Joe Biden on Tuesday evening seemed like a logical conclusion. Nevertheless, it was striking. To see the widow of the 2008 Republican presidential nominee backing the 2020 Democratic one was yet the latest reminder of Trump’s uncanny ability to alienate even the most loyal of Republicans and to pick needless fights with those who should be allies.

“I want to feel like my President cares about me and cares about this country, and Joe Biden does. I’ve known Joe for over 40 years and I know the kind of man he is,” Mrs. McCain told NBC’s The Today Show on Wednesday. At the same time, Mrs. McCain said she would not weigh in on a Senate race for her husband’s former seat, which is pitting Democratic astronaut Mark Kelly against appointed Republican Martha McSally. “I have no interest in it,” Mrs. McCain had told The New York Times earlier.

As expected, Trump immediately hit back on Twitter: “I hardly know Cindy McCain other than having put her on a Committee at her husband’s request. Joe Biden was John McCain’s lapdog. So many BAD decisions on Endless Wars & the V.A., which I brought from a horror show to HIGH APPROVAL. Never a fan of John. Cindy can have Sleepy Joe!”

The remarks were a continuation of Trump’s years-long diatribe against Sen. John McCain, a prisoner of war, two-time presidential contender, long-time Senator and an American icon. As a candidate in 2015 and 2016, Trump mocked and belittled him. As President, Trump openly raged against McCain, who, while fighting terminal brain cancer, stood in the breach as fellow Republicans were on the precipice of repealing the Affordable Care Act. McCain’s funeral at the National Cathedral was notable in its explicit exclusion of Trump and a moving eulogy from Biden. And when it came time this summer for the first political conventions since McCain’s death, it was the Democrats — not McCain’s own Republican Party — who paid tribute to him as a patriot.

Mrs. McCain lent her voice to the video tribute to her husband in the Democrats’ virtual convention — a move seen at the time as a tacit endorsement of Biden. Early in his career, McCain served as a military aide to Biden in the Senate, a post in which he caught the political bug. Biden built a generous relationship with his former aide and doubled-down on his friendship with the McCain family as the patriarch battled the same form of brain cancer that claimed his son Beau Biden’s life at age 46.

During McCain’s final days, Biden visited the McCain family ranch near Sedona for one last chat with his friend. In the years that followed, Biden has been a frequent comfort to family members, including ABC’s The View host Meghan McCain, who did little to hide her sincere affinity for Biden during his appearances on the show.

But long-time observers of the family, including myself, didn’t expect Mrs. McCain to be so fulsome with her support for Biden. After all, she was a survivor of two of the nastiest presidential races in American history. She never fell in love with politics the way her husband did. She was the second wife whose predecessor was a favorite of the Senate spouses and Nancy Reagan. She rightfully never forgave the hateful rumors spread about the adopted daughter during McCain’s 2000 presidential run or the innuendo-laden reporting about her husband’s cozy relationship with a female telecom lobbyist during his 2008 run. She saw the campaign aides as self-serving, the donors as fickle opportunists and reporters as apologists for then-Sen. Barack Obama. Her work on human trafficking and women’s rights around the globe were more her pace than any return to a campaign schedule.

But occasionally, when the stakes were high and her patience at its end, Mrs. McCain could give as good as she could get. Those days were a perfect reminder that as much as she tried to cede the spotlight to her husband and serve in the role of supportive wife, there was a hardened and competitive business executive and passionate humanitarian who had an unflappable sense of what is right and what is wrong.

I had to dust off my 2008 campaign scrapbook to recall where I was the day that Mrs. McCain made her biggest step out of her husband’s political shadow and offered an unflinching indictment of Obama. We were at Lehigh University, in Bethlehem, Pa., on Oct. 8, 2008. And Mrs. McCain was ready to join the fight in a way we’d never seen before, a month before Election Day and with her husband seemingly coasting to a loss.

“The day that Senator Obama decided to cast a vote to not fund my son, while he was serving, sent a cold chill through my body, let me tell you,” Mrs. McCain said, referring to Obama’s 2007 vote against a military spending plan because it lacked a timeline for withdrawal from Iraq. “I would suggest that Sen. Obama change shoes with me for just one day.” Mrs. McCain, as mother of active-duty sons, had laid down her marker.

It was her first time truly savaging the then-Senator from Illinois’ record with the troops. We all stopped in our tracks, even if we didn’t know how to process just what to make of Mrs. McCain’s late entry into partisan politics. Sure, we knew her lucky purple suit, the fancy broach, her unflinching defense of her husband. We knew not to ask her about politics — not because she didn’t understand the game but because she didn’t want to live in that world.

So to hear her endorse Obama’s Vice President, 12 years later, I knew that something had seared her sense of decency in a similar way. Then again, thinking back on it, the McCains have been saying it for years. The McCain slogan of 2008 wasn’t just cheesy rhetoric. It was a family motto, even if it took a political hand to articulate it: “Country First.” Through that prism, Mrs. McCain’s endorsement makes all the sense in the world. 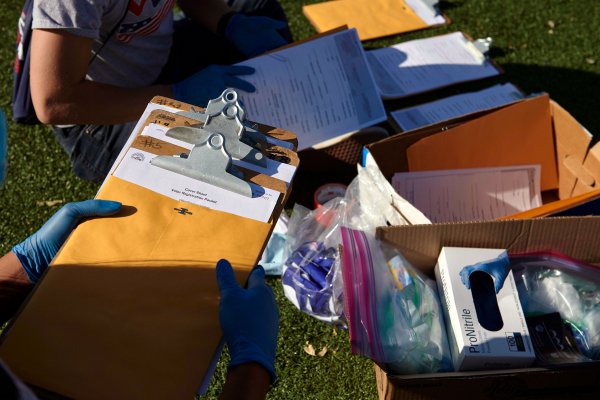 On National Voter Registration Day, Big Tech Looks to Expand the Electorate
Next Up: Editor's Pick