J&J's COVID-19 Vaccine Will Enter Phase 3 Testing, the Fourth To Reach That Stage

Johnson & Johnson announced today (Sept. 23) that it is launching a large-scale Phase 3 test of its COVID-19 vaccine candidate, which was developed based on science supported by the National Institutes of Health. The vaccine, being tested through the company’s Janssen Pharmaceuticals arm, will be the fourth to enter late stage studies, following candidates from Moderna, Pfizer-BioNTech and AstraZeneca. Unlike those vaccine candidates, which all require two shots, J&J’s vaccine involves a single injection. That means it could require half the number of doses to immunize the same number of people.

J&J’s study, named ENSEMBLE, will recruit 60,000 volunteers across eight countries—Argentina, Brazil, Chile, Columbia, Mexico, Peru, South Africa and the U.S. Given the data showing that some groups are more vulnerable to the effects of COVID-19, Dr. Paul Stoffels, chief scientific officer at J&J, said the company and its study leaders are focusing on ensuring that the study includes a diverse population of participants.

The vaccine uses a weakened cold virus, called AD26, to deliver the COVID-19 virus’s genetic material to the right immune cells in the body. Those cells then process the viral material to train the immune system to recognize and destroy any similar incoming virus. Based on studies in hamsters and monkeys, the vaccine produced sufficient immune responses that could neutralize the virus in the lab, and early tests in people which began in mid-July produced similarly encouraging results, which Stoffels says the company will publish in coming weeks.

J&J’s coronavirus vaccine relies on a platform that the company had previously used to create Zika, HIV, RSV and Ebola vaccine candidates; only the Ebola vaccine has been approved so far, and only in the European Union. However, Stoffels said in a briefing, “We have studied this vaccine platform in more than 100,000 people [in other diseases] so that enabled us to go very fast and optimize for a COVID-19 vaccine,”

As with the other late-stage trials, this study will be supervised by the same data safety monitoring board, which will analyze the data regularly for safety signals and signs of effectiveness or futility.

Dr. Anthony Fauci, director of the National Institute of Allergy and Infectious Diseases, which is supporting the trial, said that the timing for results from the J&J study (and the other three late-stage vaccine studies) will depend on how many cases of COVID-19 are recorded among both the vaccinated and the placebo groups. Only that comparison will give researchers a strong enough signal about whether or not a vaccine creates sufficient immunity. “I have said in the past that we predict we could have an answer from [the first vaccine trial from Moderna] that started in July, sometime in November or December,” he said in a briefing discussing the J&J trial. “It’s conceivable it could be earlier, that it could be October, but I think that is unlikely but not impossible. We are now in September and this trial is starting later, so I think the projection would be maybe a month or two later [than the others].”

One factor that could save J&J some time is the fact that it’s vaccine only requires a single dose, which could cut a month off its study time—the other vaccine candidates require three to four weeks between shots.

Either way, Dr. Francis Collins, director of the National Institutes of Health, said in the briefing, “People may have heard the term warp speed, and are maybe slightly nervous that it means things are going to be rushed through and that corners will be cut on safety and efficacy. I want to reassure [everyone] that will absolutely not happen. I doubt that many vaccine trials of this size have ever been subjected to the rigor with which these trials are evaluated.” 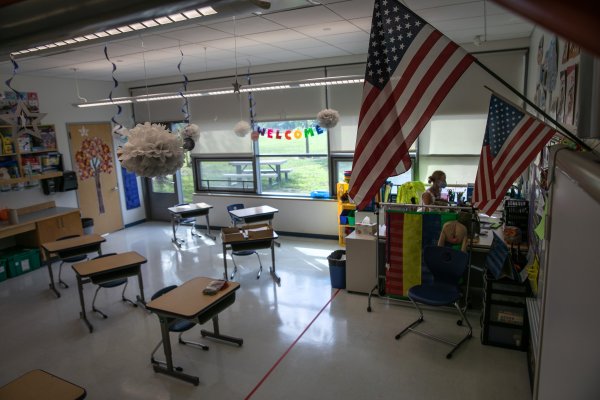 As Schools Open, Kindergarteners Are Absent
Next Up: Editor's Pick