California Plans to Make Ethnic Studies a Requirement for Public-School Students. Here’s the History Behind the Idea

Last month, when California Governor Gavin Newsom signed AB 1460, a bill mandating an ethnic studies course requirement for all undergraduates in the California State University (CSU) system, Alondra Esquivel Garcia felt a sense of relief. Garcia, who is a senior at San Francisco State University and a student leader in the Cal State Student Association, had not been exposed to ethnic studies until she stepped onto her college campus, but studying the subject had affected her deeply. Now, she hopes, more of her peers will have the same experience. “I fell in love with learning about my own history and histories that have been forgotten,” she says. “Other students will now get to take ethnic studies courses on their own campuses.”

But Garcia and other student activists are not satisfied with college students being exposed to ethnic studies. They have also been at the forefront of a movement to establish ethnic studies as a graduation requirement for all of California’s public-school students.

Jasmine Sky Nguyen, Co-Executive Director of Diversify Our Narrative (DON) and a sophomore at Stanford University, working alongside student leaders from GENup and March for Our Lives California, has been advocating for increasing the number of anti-racist and diverse texts taught in high schools. Before AB 331, the high-school ethnic studies requirement bill, was put to a vote in the State Assembly, the DON statewide chapters mobilized to “send 1200 emails, make 350 calls, and receive 22,500 petition signatures in just one week of direct action,” says Nguyen. Their student-led grassroots efforts have produced the results they desired: AB 331 was passed by the Assembly in August and is also expected to be signed into law by Governor Newsom later this month.

In California, the current spotlight on racial justice helped revitalize calls for the incorporation of ethnic studies into statewide curricula, and Abdullah says the field is particularly significant in today’s political climate because it “belongs to the struggle for liberation, the struggle for decolonization, and the struggle to make Black Lives Matter.” Even so, the field itself predates the Black Lives Matter movement by decades—and the recent milestones for ethnic studies in the CSU system, which is the birthplace of ethnic studies itself, are the culmination of an ongoing battle that can be traced back to over 50 years ago.

The origins of the Third World Liberation Front

The foundations of ethnic studies were laid by members of SF State’s Black Student Union (BSU) in the mid-1960s. At the time, minority students made up just 4% of the student body, and the university had been resisting appeals for the creation of a Black studies department. Lacking political power, the BSU started to demand admissions spots for Black students and courses that would accurately reflect their history.

At the time, Laureen Chew, who is now a Professor Emerita with the College of Ethnic Studies in the Asian American Studies Department at SF State, was a student member of an organization that tutored young immigrants in the local Chinatown community. Her activism was sparked when she and her Chinese American friends started realizing that their families’ experiences dealing with prejudiced treatment were not unique. “My friend and I attended a meeting with African Americans, Chicanos and Native Americans. We were all talking about the same issues, and our student groups were doing similar work in our respective communities,” Chew says from her home in San Francisco, where she has lived her entire life.

Realizing that the BSU students and other students of color were organizing around common causes, the groups on campus decided to join forces, calling themselves the Third World Liberation Front (TWLF). The concept of the Third World “didn’t flatten differences, but allowed different communities to come together and see themselves in one another,” says Jason Ferreira, an Associate Professor in the Department of Race & Resistance Studies, located within the College of Ethnic Studies at SF State. “The fight against racism, the fight for a relevant and meaningful education, the necessity of meeting the needs of their communities—regardless of whether you were Black, Brown, Asian or Native—those principles are what held people together, and gave them the resolve to work through differences in their alliance. What developed at SF State was revolutionary.”

The building frustrations of the TWLF met their final catalyst when George Murray, the Minister of Education for the Black Panther Party and a revered English instructor and graduate student at SF State, was suspended by the administration on Nov. 1, 1968. Five days later, the BSU and TWLF mobilized a strike and issued a list of demands, including the establishment of a Third World College and guaranteed admission for all applicants of color the following academic year. That action would become the longest U.S. student strike ever.

After multiple violent interactions between the strikers and police, heavily-publicized negotiation failures, the resignation of the president of SF State and a ban on all student gatherings, a compromise was finally reached on March 20, 1969, between members of the BSU, representatives from the TWLF and committee appointees of the administration. Instead of the Third World College originally envisioned by the TWLF, SF State agreed to establish a College of Ethnic Studies.

The legacy of the Third World Strike

Following the strike’s end, ethnic studies programs immediately proliferated across the U.S. Robert A. Corrigan, who served as the President of SF State until 2012, has written, “I can say first-hand that it had national impact. At the time, I was on the American Studies faculty at the University of Iowa and we saw this extraordinary movement spreading out from SF State across America.” Within a decade, over 430 U.S. colleges and universities started offering a total of at least 8,800 courses in ethnic studies.

Despite the initial momentum, “it wasn’t a permanent win,” Abdullah says. “From 1968 onwards, ethnic studies has constantly faced attacks by university administrators.” And whenever budget cuts to university systems have been introduced, Abdullah notes that the first departments on the chopping block have often been ethnic studies programs—“it’s been an ongoing struggle to maintain, expand, and entrench ethnic studies.”

For Maryana Khames, a junior at San Diego State University and a Student Trustee who advocated for AB 1460, the bill’s passage reflects what “students have been fighting for for decades.” As a student representative, she hopes she has been able to convey “how impactful ethnic studies has been”—not just for her and her peers, but for all the generations of students who have come before her as well. 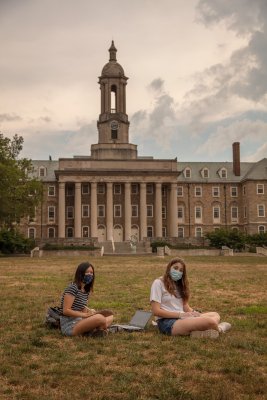 As Colleges Open During a Pandemic, Student Life Remains Closed
Next Up: Editor's Pick