The DOJ's Move to Take Over Trump's Lawsuit May Be Legal. But Is It Appropriate?

US President Donald Trump (R) and US Attorney General William Barr step off Air Force One upon arrival at Andrews Air Force Base in Maryland on September 1, 2020.
Mandel Ngan — AFP/Getty Images
By Tessa Berenson

This week, the Justice Department moved to take over President Donald Trump’s defense against a woman who claims he defamed her when he denied her accusation that he sexually assaulted her decades ago in a New York City department store. While the Justice Department claims this is a routine application of the law, the reality is more complicated, legal experts say.

To take over the case for the President, the Justice Department is using the Westfall Act, which allows the Department to take over suits against federal employees for torts —or civil wrongs—from acts they take in the course of their official duties. The law gives federal employees absolute immunity from these lawsuits. “The law is clear,” Attorney General William Barr said on Sept. 9. “It is done frequently. And the little tempest that is going on is largely because of the bizarre political environment in which we live.”

It is true that the Westfall Act is invoked regularly for federal employees. And while the DOJ’s use of the law may be perfectly legal, in this case, it’s inappropriate, some say. “This is a case where the legal answer and the right answer diverged,” says Jonathan Turley, professor at the George Washington University Law School.

In this case, E. Jean Carroll filed a defamation suit against the President in 2019, claiming he lied after she accused him earlier that year of raping her in the 1990s. Trump had denied her account, said he had never met her, and told the media she was “not my type.” The case had been proceeding in New York state court with Trump represented by private counsel. When the Justice Department stepped in this week, it argued in a filing that Trump’s denials of Carroll’s accusations were actions “within the scope of his office or employment.” In other words, the Department argues, because Trump’s denial came as part of his job as President, the Westfall Act should apply, and Trump should have legal immunity from Carroll’s lawsuit.

Barr said the DOJ had been acting at the request of the White House to take over the case. The Justice Department’s move to intervene was made just weeks after a New York judge had rejected Trump’s bid to halt the lawsuit. Stephen Vladeck, professor at the University of Texas School of Law, says the unexplained delay in the Justice Department’s decision to intervene after Carroll filed her case last year raises questions about the Department’s motivations. If this were “such an obvious, typical case,” Vladeck says, “it doesn’t look like it.”

“What’s unusual here is that there actually is room for debate as to whether the President was acting in his official capacity or just on his own,” Vladeck says. “The typical case is just patently obvious that the President’s being sued for something he did as President.”

Barr argues that talking to the news media falls under the scope of a president’s official duties, even if it is about a personal matter. “The court said that elected officials in our representative democracy, when they are answering questions in office even about personal affairs, any defamation claim is subject to Westfall,” Barr said.

He was referring to a 2006 ruling by the D.C. Circuit Court of Appeals that the Westfall Act applied to a congressman who had made alleged defamatory statements while talking to a reporter about a separation from his wife. “Speaking to the press during regular work hours in response to a reporter’s inquiry falls within the scope of a congressman’s “authorized duties,”” the court wrote, even if the content of the call was about personal matters.

“The Department’s action adheres to the plain language and intent of the Statute which the courts have confirmed applies when elected officials, such as members of Congress, respond to press inquiries including with respect to personal matters,” a White House official said in a statement provided to Time on Sept. 11.

This broad interpretation of the Westfall Act in previous case law will be now be analyzed in this context, as a court will need to decide whether the law applies here. If so, Carroll’s suit against Trump will be dismissed. “Trump’s effort to wield the power of the U.S. government to evade responsibility for his private misconduct is without precedent, and shows even more starkly how far he is willing to go to prevent the truth from coming out,” Carroll’s lawyer Roberta Kaplan said in a statement earlier this week.

Regardless of the court’s decision, DOJ’s attempted use of the Westfall Act this week provides another example of the Trump Administration’s testing of boundaries between the White House and the Justice Department, and the extent to which a president should be protected from legal trouble. 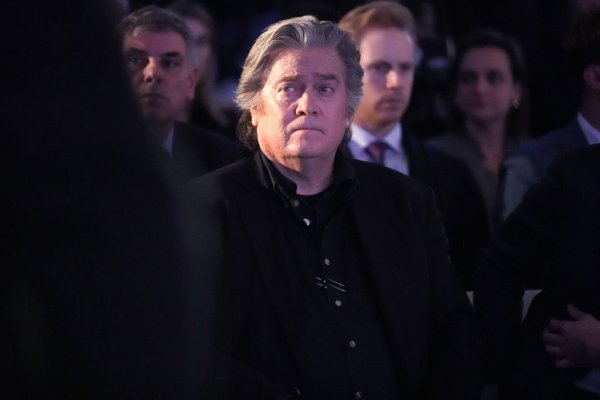 The Rise and Fall of Steve Bannon
Next Up: Editor's Pick