The Next Pandemic Stimulus Bill Must Be Race-Conscious

With an outstretched gloved hand, a volunteer helps a woman up the steps of the Mosaic Community Center Food Pantry to receive donated food in Queens on July 31
Anthony Behar—Sipa USA/AP
Ideas
By Anne Price and Jim Pugh
Price is the President of the Insight Center for Community Economic Development and a Fellow at the Roosevelt institute. Her work focuses on race, gender and wealth inequality.
Pugh is a co-director of the Universal Income Project, a nonprofit devoted to the expansion of economic security and human dignity through the implementation of a universal basic income in the United States. He is the founder and CEO of ShareProgress, and previously served as the Director of Analytics and Development for President Obama’s Organizing for America.

As Congress struggles to agree on a new stimulus bill to support people during the COVID-19 pandemic, it’s vital that we recognize what didn’t work in the first stimulus through the CARES Act. One thing has become shamefully clear: Congressional leaders’ lack of attention to the deep structural racial inequities that undergird economic fragility and joblessness in the first place has resulted in far too many Black and Latinx Americans being left out and left behind.

There is still an operating belief in a “rising tide lifts all boats,” a term attributed to President John F. Kennedy that proclaims government economic policy should focus on broad economic efforts. However, racial disparities are primarily produced and maintained by colorblind policies and practices. A stark historical example is the race-neutral GI Bill passed after World War II, which provided young men who might otherwise not have had the opportunity for post-high school education to receive college and vocational training and low-interest government-backed mortgages to buy their first homes. These programs unleashed massive wealth opportunities for white Americans, but due to discrimination in college admissions and in the housing markets, Black veterans were essentially shut out of all wealth-building opportunities. This is one reason among many that Black Americans now have a mere $0.10 for every $1 dollar of wealth owned by white people.

Without accounting for structural racism, the well-intended CARES Act became a “race-neutral” policy. While the $1,200 cash payment had many successes, the legislation overlooked the many marginalized Americans who are unbanked (60% of Black and Latinx families have no or limited access to banks), those who are undocumented, and those whose earnings are so low that they don’t file taxes. Families who didn’t file — a group with a high makeup of Black and Latinx Americans — were required to submit an additional application to receive the funds. Many people were not aware of or were confused by this process, and as a result, experienced delays in receiving payments or didn’t receive them at all.

According to a study by the Tax Policy Center, 74% of eligible white adults received stimulus checks, in contrast to 69% of Black American and 64% of Latinx Americans. Angelica Morenilla, an Afro-Latinx recruiter for an adoption and foster care agency in Oakland, CA, has yet to receive her cash payment. “It’s a hard pill to swallow when almost everyone around you has received a stimulus check, and you are still waiting,” she shared. “I thought the money would help me finally get ahead for a change and help out my mom.”

To actually have an equitable impact, policy making must be “race conscious.” Creating a race conscious policy means centering racial equity in the design process and making active efforts to overcome obstacles to access that may exist. A race-conscious policy like the recently proposed Just Futures Fund that provides universal cash payments to adults and children and adjusts the child transfer amount based on family wealth, will provide financial support to everyone, but will have a greater positive impact on Black and Latinx people, simply because those families have been systemically denied wealth building opportunities to begin with.

Congress is moving away from race-conscious policymaking rather than toward it. The additional $600 per week in unemployment benefits was one of the few provisions in the CARES Act that did offer strong support to Black and Latinx working people, since they experienced disproportionate job loss during the pandemic. The rate of joblessness among Latinx workers went from 4.8% in February to a peak of 18.5% in April before dropping to 14.5% in June, while​ ​joblessness​ among Black people is now 16.%. But even this aid failed to reach Black workers equitably – new research shows that, despite having the highest rates of unemployment in the wake of the pandemic, Black workers have received unemployment benefits at about half the rate of their white counterparts. One reason for the discrepancy is that many states with higher Black populations have made it harder to access benefits in recent years. This is not a coincidence, it is by design – this is due to decades of policy based on the incorrect stereotype that Black people are more likely to access benefits, when the truth is white Americans have always been the largest share of safety net beneficiaries.

Now, our lack of race-conscious policymaking is hurting us all. Trump’s recent cuts to boosted unemployment benefits will push millions of families closer to economic catastrophe. Instead of slashing aid in the midst of an economic crisis, Congress should maintain unemployment support where it has been, as well as making race-conscious fixes to the distribution of further stimulus checks by the IRS. Open up the process to ITIN filers, send recurring checks instead of band-aid stop gaps, coordinate with other social service agencies to identify people without prior tax returns, and invest in outreach efforts and infrastructure needed to ensure Black and Latinx people know about this support and how they can receive it. At the same time, allow everyone who didn’t receive their first stimulus check to claim it now.

In this dual crisis moment of a global pandemic and surging unemployment, millions of Americans are on the verge of falling into financial destitution. A race-conscious stimulus package would provide the lifeline that families need to make it through. 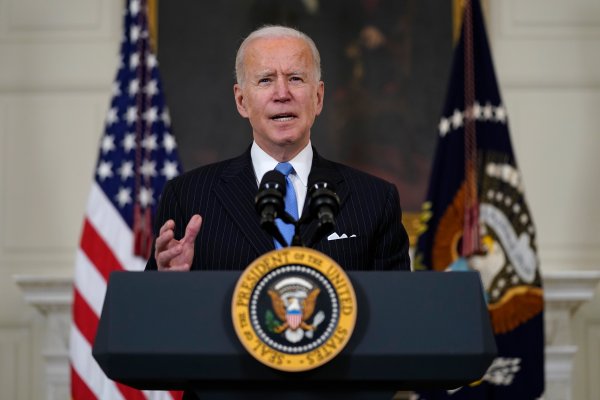 U.S. Will Have Enough COVID-19 Vaccines for All Adults by End of May, Biden Says
Next Up: Editor's Pick