In her late 20s, Katrina Bilella was beyond proud to become a first-time homeowner in the storied neighborhood of Logan Square, Chicago. So when her human resources job required her to move to Colorado in 2018, she planned to keep her treasured fixer-upper, which she’d poured her blood, sweat and tears into, and rent it out until she could return.

Then the pandemic struck. Citing economic fallout from COVID-19, her Chicago tenants stopped paying full rent in April, and Bilella herself was laid off from her Colorado job in July. Now, she is living with family in New York because she can’t move back into her own home, and she’s paying her mortgage out of her dwindling savings account.

The Trump Administration’s new eviction moratorium, announced Tuesday, isn’t going to help matters. The executive order gives the Centers for Disease Control and Prevention (CDC) authority to bar landlords from evicting most tenants for non-payment of rent through December 31. The new rules, which go into effect as soon as the order is published in the Federal Register, covers tens of millions of renters: anyone who earns $99,000 or less in income, has tried to obtain government benefits to afford their rent, has experienced a loss of income or an increase in medical costs, is using “best efforts” to make partial rent payments, and would be at risk of homelessness or having to move into a shared living space if evicted.

As concerns over mass evictions have mounted in recent weeks, housing experts see the executive order as addressing only part of a complicated problem. It’s an “incomplete solution,” says Solomon Greene, a senior fellow and housing expert at the Urban Institute. One major shortcoming of the new policy is that once it expires in December, the tenants who were on the brink of losing their homes will still be responsible for all the rent that they can’t afford to pay now. “While the moratorium extension is a step in the right direction, it won’t adequately meet the needs of millions of families who are behind on their rent,” Peggy Bailey, vice president of housing policy at the Center on Budget and Policy Priorities, said in a statement.

For landlords like Bilella, it’s bad news. It means she’ll have to continue to pay her mortgage on a property for which she is no longer earning an income, can’t live in, and would be hard-pressed to sell to a new buyer while tenants are squatting in it. She’s also praying the moratorium doesn’t get extended beyond the end of December. At that point, her tenants—whose lease was up in April—would owe her nine months’ worth of rent. She’s already $12,000 in the hole from their missed payments, in addition to the $2,000-plus she’s spent on enlisting a lawyer to walk her through her limited options.

But the new rule isn’t ideal for Bilella’s tenants either. For renters who aren’t able to keep up with current debts, it amounts to nothing more than a band-aid on a wound that really needs stitches. It’s comforting that they now no longer have to worry about eviction for the next few months, but after that, they’ll be required to pay months and months of back rent in lump sums as early as January 1, or risk eviction. They also may be on the hook for late fees on their back rent, which the order explicitly permits.

Critics say Tuesday’s announcement smacks of political expediency just weeks before a major Presidential election: it provides short term relief, but helps neither tenants nor small landlords past the new year. That didn’t stop President Donald Trump from claiming political chits for the CDC order on Tuesday. “I want to make it unmistakably clear,” he announced in a White House press release, “I’m protecting people from evictions.”

The order also poses a host of logistical issues. First, it’s unlikely renters who have struggled to make payments will all of a sudden have enough cash on hand to pay back-rent (plus, possibly, fees) once the moratorium ends. It’s also unlikely that small landlords who are themselves struggling to make ends meet will be able to quickly receive the back rent they urgently need. (Municipal courts will inevitably be backlogged when landlords are eventually able to evict en masse, and evicted tenants can sometimes avoid paying rental debts by moving across state lines, working under-the-table jobs, or filing for bankruptcy.)

Second, to be covered by the moratorium, renters need to file a declaration attesting they fit income and hardship qualifications. This may be difficult for renters who are not aware of the new protection, and those who do not have access to the internet to obtain the form. Greene also expects there may be legal challenges to the CDC’s order, as the statute and regulation it cites have never been applied in the context that the CDC is invoking them. “There is a lot of legal uncertainty here,” he says.

Still, housing advocates and experts say the new eviction moratorium, however imperfect, is a critical first step in protecting Americans’ health six months into a pandemic caused by a virus, in part because it will help prevent an immediate surge in evictions and, subsequently, homelessness. “Evictions in the midst of a pandemic present an enormous public health risk, and one that we cannot afford to take,” says Greene. In July, 32% of U.S. Households did not make full and on-time housing payments for the month, according to a survey by Apartment List. By August, the Aspen Institute estimated between 29-43% of renter households could have been at risk of eviction by the end of the year if not for “robust and swift intervention.”

The move was especially important, Greene adds, as other federal relief efforts have expired. It’s been months since Americans received a stimulus check, expanded unemployment from the CARES Act ran out in July, and swaths of eviction protections issued at the state and local level are no longer in effect or were set to expire soon. A more coherent solution, Greene argues, would be one that also includes rent relief payments that either go directly to landlords on behalf of tenants, or to tenants who would then use the funds to pay their landlords. The CDC order, he says, buys the government time to come up with a solution that includes that.

If the Trump Administration’s executive order was motivated in any part by politics, it may have backfired. By not seeking a more robust solution from the start—and therefore punting the financial burden to landlords while also merely delaying the debts of renters—he may lose some of both come November.

Belinda Melendrez-Flores, a 48-year-old landlord who owns three rental properties in Texas, says she had no intention of voting in November. But now that she’s having a difficult time affording monthly infusions to treat a Lupus diagnosis because some tenants aren’t paying, she says she’s definitely headed to the polls. “I really hate to say this. But right now, I’m really, really mad at Trump. And I’m hoping that before November 3, there’s some sort of relief. If not, I’m most likely gonna vote for [Democratic nominee Joe] Biden.” 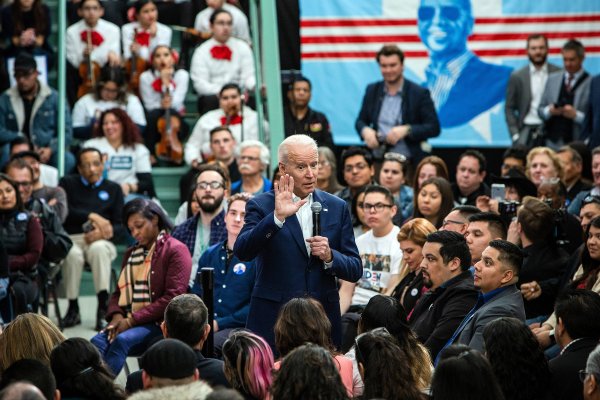