Freelance reporter Farhad Hamo, who was last seen being taken away from a prison, was abducted more than five years ago.
Courtesy of One Free Press Coalition
By TIME Staff

Farhad Hamo, a freelance journalist working for a Kurdish broadcaster, was last seen being taken away from a Syrian prison in March 2015 by a cameraman who has since been released in a prisoner swap. Members of the Islamic State militant group abducted Hamo more than five years ago while he and another journalist were driving to interview a local political leader in northern Syria. The duo were threatened at gunpoint during a security check and told to drive to a town where they were later imprisoned. An Islamic State court sentenced them to death by beheading. Hamo’s fate and well-being remains unknown.

Hamo’s story represents just one of at least 64 cases of journalists missing around the world, according to the Committee to Protect Journalists (CPJ).

Some, like reporter Ibraimo Mbaruco, went missing just a few months ago in Mozambique after leaving work and notifying a colleague that he was “surrounded by soldiers.” Others, like newspaper journalist María Esther Aguilar Cansimbe, have been missing for more than a decade. Cansimbe, a mother of two, was investigating police abuse allegations in Mexico.

To remember these journalists, CPJ launched a #MissingNotForgotten campaign on Aug. 30 to tell their stories and pressure authorities to continue investigating their disappearances even as the pandemic has slowed down or stopped the progress of inquiries.

One Free Press Coalition—a collection of nearly 40 news organizations, including TIME—is helping to keep missing journalists’ stories alive by maintaining a monthly list of the most serious cases of attacks on press freedom around the world.

Here are 10 of the most urgent cases of missing journalists around the world right now.

Journalist, cartoonist and columnist abducted more than 10 years ago after leaving his house.

Prageeth Eknelygoda, a cartoonist and columnist for online news outlet Lanka eNews, was last seen by his wife and two teenage sons as he left his house for work more than 10 years ago. Ahead of the 2010 presidential election, staff of Lanka eNews faced intimidation for its opposition of Mahinda Rajapaksa’s government. Last year, the attorney general indicted seven individuals over Eknelygoda’s abduction, and the trial is ongoing. In the past six months, Eknelygoda’s wife, Sandya, said she believed witnesses in the case were being intimidated, and that threats to her and surveillance of her family had increased.

Journalist’s belongings found days after her disappearance 7 months ago.

Daysi Lizeth Mina Huamán was last seen waiting for a bus on Jan. 26, on her way to meet her boyfriend after voting in Peru’s congressional elections and filing a report for television broadcaster Cable VRAEM in the central city of Ayacucho. About a week after the disappearance, family members found her identity card and other personal documents along the side of a road between the bus stop and her destination.

Freelance reporter Farhad Hamo, who was last seen being taken away from a prison, was abducted more than five years ago.
Courtesy of One Free Press Coalition

Freelance reporter abducted in 2014 last seen being taken away from a prison.

In December 2014, members of the Islamic State militant group abducted two freelance journalists working for the Kurdish broadcaster Rudaw TV. The journalists had been driving to interview a local political leader when armed men stopped the vehicle, examined the occupants’ phones and laptops and threatened them at gunpoint to drive to the town of Tel Hamis, where they were imprisoned. An Islamic State court sentenced them to death by beheading. Cameraman Massoud Aqeel, who was later released in a prisoner swap, last saw reporter Farhad Hamo being taken away from Raqqa’s prison in March 2015.

Freelance photojournalist Vladjimir Legagneur was last seen by his wife in March 2018 after he left their home in Haiti.
Courtesy of Fleurette Guerrier

Freelance photojournalist Vladjimir Legagneur was last seen by his wife in March 2018 after he left their Port-au-Prince home. According to a colleague, Legagneur was working on an independent project in Grand-Ravine, known for high rates of violent gang activity. A police spokesperson said he “feared a fatal outcome” after skeletal remains and a hat were found that month near the site of Legagneur’s disappearance, but officials never announced conclusive results from collected evidence and DNA tests. There is no indication of any further investigation.

María Esther Aguilar Cansimbe, a mother of two, was last seen leaving her home in the central state of Michoacán in November 2009. She reported for regional news outlets, including Zamora-based daily El Diario de Zamora and regional daily Cambio de Michoacán, and tended to focus on organized crime and local corruption, sometimes omitting her byline out of awareness of possible reprisal. In the weeks before she vanished, Aguilar’s coverage included police abuse allegations and the military’s anti-cartel efforts. According to CPJ data, at least 14 journalists are currently missing in Mexico.

Reporter Jean Bigirimana is feared to be dead after four years missing.
Courtesy of Iwacu

Reporter feared to be dead after four years missing.

Jean Bigirimana has not been seen or heard from since July 2016, after he received a call from a source in the country’s national intelligence service and left his home in Bujumbura. The reporter for independent weekly newspaper Iwacu formerly worked for the pro-government radio station Rema FM. Sources report the journalist was arrested by intelligence agents and accused of writing about exiled Burundian journalists living in Rwanda, and family members fear Bigirimana is dead. Four fellow Iwacu reporters, also targeted by government authorities, are currently serving a 2-and-a-half-year prison sentence.

A reporter and news presenter for the Palma Community Radio broadcaster in the northern Cabo Delgado province, Ibraimo Mbaruco disappeared on April 7 after leaving work and then texting a colleague saying he was “surrounded by soldiers.” The journalist’s brother told CPJ he reported the disappearance to local police and the provincial prosecutor’s office but had yet to receive any information about Ibraimo’s whereabouts and did not know if he was still alive. To date, the government has not launched a credible investigation. Mbaruco was also part of the Sekelekani network, a local civil society organization that trains citizen journalists.

In March 2007, Oralgaisha Omarshanova, who uses the pen name Oralgaisha Zhabagtaikyzy, wrote about ethnic clashes in rival regions of Almaty, Kazakhstan’s financial capital. On a business trip there, colleagues from Astana-based independent weekly Zakon i Pravosudiye (meaning “Law and Justice”), last saw Omarshanova, director of the anti-corruption department, getting into a vehicle. The following month, her brother said at a press conference that, in the weeks prior to her disappearance, Omarshanova had received several death threats via telephone warning her to stop reporting.

Azory Gwanda, a freelancer in Tanzania who had been investigating mysterious killings in his rural community, went missing in November 2017
Courtesy of Mwananchi Publications Limited

The Tanzanian government has failed to conduct a credible investigation since Azory Gwanda, a freelancer who had been investigating mysterious killings in his rural community, went missing in November 2017. In a BBC interview in June 2019, Tanzania’s foreign minister said the journalist was among several people who had “disappeared and died;” however, the minister later issued a clarification saying his statements were taken out of context and that he did not know whether the journalist was alive or dead. Authorities have not responded to CPJ’s repeated requests for updates in the case.

Lebanese photojournalist Samir Kassab has been missing for seven years. He was reporting in Aleppo in October 2013.
Courtesy of One Free Press Coalition

Samir Kassab, a Lebanese photographer working for the Abu Dhabi-based broadcaster Sky News Arabia, disappeared in October 2013 while reporting alongside Mauritanian reporter Iszhak Ould Mokhtar in Aleppo. Kassab’s fiancée told CPJ in 2019 that no group had claimed responsibility for the journalists’ abduction. At least nine journalists are currently missing in Syria, a country that also claims the highest number of foreign journalists missing. CPJ recently helped 60 Syrian journalists and their families escape dangerous conditions and resettle in Europe. 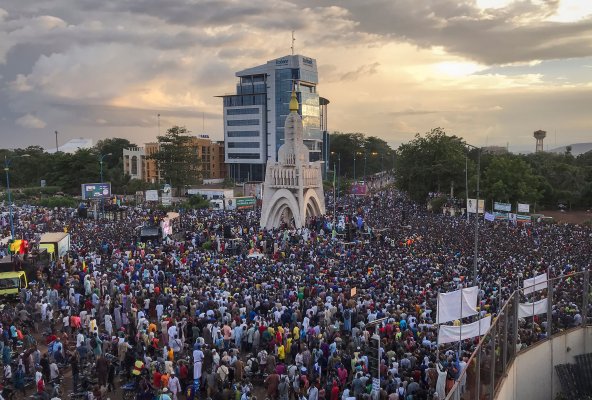 Bremmer: What Happens Next in Mali After the Coup
Next Up: Editor's Pick