Why We Believe Planting 1 Trillion Trees Can Save the Planet

For more than six months, a pathogen has swept through nearly every country in the world, unleashing an unprecedented global health and economic emergency. At the same time, another potentially more lethal emergency continues to threaten us: the warming of the planet.

While the impacts of the climate crisis have been more gradual than the spread of COVID-19, there is no doubt that our world is changing. Millions of people have suffered losses from catastrophic droughts, hurricanes and floods. It’s not just that our own health and economies are being threatened; it’s that climate change is reshaping a planet that will not support the lives of future generations.

The climate-science community has demonstrated that if we do not make significant progress in combatting this crisis, global temperatures could rise above the critical 1.5°C threshold, permanently damaging the natural systems that sustain us.

The truth is, we know how to fight the climate crisis: reduce emissions, become carbon neutral, clean up oceans and develop a sustainable relationship with the natural world to restore the biodiversity of key habitats. Climate scientists, environmental organizations and even governments have, each in their own way, worked out how to tackle every one of these steps. Their implementation requires a combination of technology, policy, funding and coordination.

By far the most cost-effective of all the big solutions is to protect and restore forests. Forests extract and store CO2 from the atmosphere and produce the oxygen we breathe. But these complex ecosystems have been systematically destroyed. We have already lost nearly half the world’s trees, most within the last 100 years. And most of the remaining trees—about 3 trillion—are still under threat, even though they are a critical tool in the fight against climate change.

At this moment in time, massive fires have yet again erupted around the world, from California to the Congo Basin to the Amazon. Far too many of these fires are intentionally set because agricultural profits have been prioritized over the health of our planet. A call to stop deforestation is more important than ever before.

That’s why forward-thinking corporate leaders who understand the urgent need to heal our planet are supporting environmentalists who have been in the fight for decades. We’ve joined forces—a businessperson and a conservationist—to support the Trillion Tree challenge (1T.org), an effort to bring together old and new partners to add momentum to the regreening of our planet and plant 1 trillion trees around the world by 2030. Companies joined by NGOs and youth movements as well as a number of governments, such as the U.S., have pledged their support for this solution. Those involved will be able to share best practices, with a major goal of maintaining biodiversity standards.

This effort could capture an estimated 200 gigatonnes of carbon over the coming decades, an amount equal to two-thirds of the pollution produced since the Industrial Revolution. But it will take time for young trees to capture the same amount of CO2 as mature forests. That is why we need many new partners to join the tens of thousands of efforts already under way.

Planting 1 trillion trees won’t be easy, but each one of us can make a difference in this fight. We can plant trees in backyards and neighborhoods, or donate to one of the many responsible programs that have long been restoring and protecting forests and woodlands in almost every country around the world.

Our challenge is clear. We can protect and restore our forests while also investing in jobs and global economies. But our success will depend on one another; together we can create the kind of change needed to heal our planet. 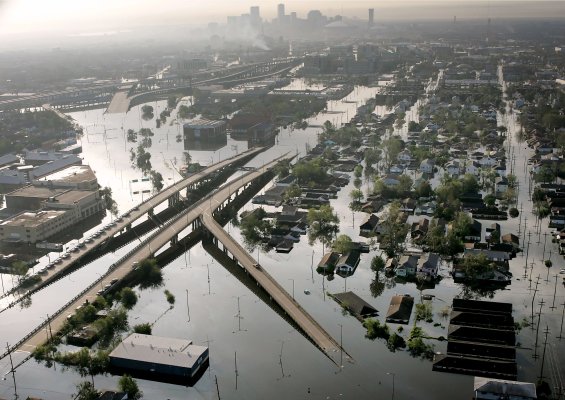 Katrina Showed Us Government's Utter Failure
Next Up: Editor's Pick