Nobody will ever know the identity of the thousands of African children who were not killed or paralyzed by polio this year. They would have been hard to keep track of no matter what because in ordinary times, they would have followed thousands last year and thousands the year before and on back in a generations-long trail of suffering and death.

Instead, no African children were claimed by polio this year or last year or the year before. It was in 2016 that the last case of wild, circulating polio was reported in Nigeria—the final country on the 54-nation African continent where the disease was endemic. And with a required multi-year waiting period now having passed with no more cases, the World Health Organization today officially declared the entirety of Africa polio-free. A disease that as recently as the late 1980s was endemic in 125 countries, claiming 350,000 children per year, has now been run to ground in just two remaining places, Pakistan and Afghanistan, where there have been a collective 102 cases so far in 2020. That’s 102 too many, but there is no denying the scope of the WHO announcement.

“Today’s victory over the wild poliovirus in the African region is a testament to what can happen when partners from a variety of sectors join forces to accomplish a major global health goal,” says John Hewko, general secretary and CEO of Rotary International. “[It is] something the world can and should aspire to during these turbulent times.”

It was Rotary, an international nonprofit service organization, that kicked off the polio endgame in 1988 with the launch of the Global Polio Eradication Initiative (GPEI). That program aimed to leverage the power of Rotary’s 35,000 clubs and 1.22 million members in 200 countries and territories worldwide to make polio only the second human disease—after smallpox—to be pushed over the brink of extinction. The job was made easier by the partners Rotary immediately attracted: the WHO, the U.S. Centers for Disease Control and Prevention (CDC) and UNICEF. The Bill and Melinda Gates Foundation joined in 2007, followed by Gavi, the Vaccine Alliance, just last year. The 32-year initiative has depended on volunteer workers and charitable donations, which together have produced an army of 20 million field workers administering vaccines to over 2.5 billion children at a cost of $17 billion.

Some countries were a lighter lift than others. In the U.S. the disease was eradicated in 1979, well before the GPEI even began its work. Other nations followed: In 1994 the Americas were declared polio-free. Europe as a whole got a clean bill of health in 2002, when all 53 countries in the WHO’s designated European region were declared free of the virus. Massive vaccination efforts began in India in 1997, which eradicated the virus in 2014.

How Polio Was Eradicated from the African Continent

But Africa, with its vast sprawl of village populations, long distances to urban hospitals, spotty infrastructure like adequate roads and reliable “cold chains”—refrigerated transport networks to keep vaccines viable—was always going to present special challenges. In 1996, when the case count on the continent regularly reached 75,000 victims every year, South African President Nelson Mandela partnered with Rotary to launch the “Kick Polio Out of Africa” Campaign, and the group scrambled fast—or as fast as was possible with so many children to vaccinate on so vast a land mass. In 2000, the first synchronized campaigns began in 17 countries, with 76 million children being vaccinated by tens of thousands of volunteers. The work fanned out across the continent from there, including an especially heavy push from 2008 to 2010, when an outbreak in 24 countries in western and central Africa was met by a large-scale, multi-national vaccination of 85 million children.

Finally, Nigeria stood alone as the only African nation where the disease was still endemic, in part because of resistance by religious leaders in the northern part of the country who objected western interference in local affairs and claimed that the vaccine was unsafe. That opposition broke down, partly thanks to Muhammad Sanusi II, the Emir of the city of Kano—a hereditary leader descended from a ruling family—who appeared at a public ceremony before the kick off of a seasonal vaccination campaign in 2016, called for a vial of polio vaccine to be brought to the stage, and with the audience watching, broke its seal and drank down its entire contents. That year, the country recorded its last case of polio, and this year, Nigeria’s WHO certification is the reward for its efforts.

“The polio eradication program in Nigeria has gone through some difficult times, but I never once doubted that this day would come,” says Dr. Tunji Funsho, a former cardiologist who is the chair of Rotary International’s Polio-Plus Committee in Nigeria. “Any time that we’ve experienced a setback, Rotary and our partners have been able to find solutions and develop new strategies for reaching vulnerable children.”

The Next Steps Towards Global Eradication

Other challenges remain. For one thing there are still the stubborn polio redoubts of Afghanistan and Pakistan, but Funsho is cautiously optimistic. “Afghanistan and Pakistan have their own set of challenges in the fight against the wild poliovirus, but so did the African region and Nigeria,” he says. “I cannot put a time stamp on when wild polio will be eradicated in the two remaining countries. The lessons we’ve learned in Nigeria and the African region show that eradication can only be achieved through global commitment.”

What’s more, wild polio is not the only kind that causes disease. The oral vaccine contains a live but weakened virus, which in rare cases can mutate and lead to the very disease it’s designed to prevent. There have been 302 cases of vaccine-derived polio in both endemic and non-endemic countries so far this year—all localized and not widespread like wild polio can be. Again, that case count is small by earlier standards, but again too many by the standards of the children and the families who are its victims.

Stopping those infections means eventually supplementing the oral, live-virus vaccine with the injectable variety that uses a killed virus that can never cause the disease. The downside of the killed vaccine: it requires trained health care workers to administer the shots, as opposed to volunteers who can easily learn to place drops in a child’s mouth. That final round of vaccinations will be thus more expensive and labor-intensive than earlier rounds, but only after the handful of vaccine-derived cases are eliminated too, will the scourge of polio at last pass into history. Funsho and others are convinced that will happen.

“One thing I know for certain,” he says, “is if Nigeria could eliminate the wild poliovirus, any country can eliminate it.” 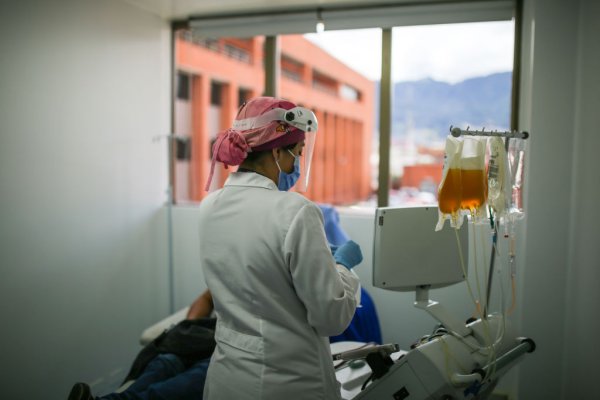 How Convalescent Plasma Could Help Fight COVID-19
Next Up: Editor's Pick