What Stereotypes About Viking Masculinity Get Wrong

Part of the Viking image today is a caricature of masculinity—the long-haired warrior still incorporated into the logos or advertising for products appealing to a supposed ideal of manly behavior. But Viking-age Scandinavian reality embraced so much more, including a true fluidity of gender. Patriarchy was a norm of Viking society, but one that was subverted at every turn, often in ways that—fascinatingly—were built into its structures.

The Vikings were certainly familiar with what would today be called queer identities. Gender boundaries were rigidly policed, at times with moral overtones, and the social pressures laid upon men and women were very real. At the same time, however, these borders were permeable with a degree of social sanction. There is a clear tension here, a contradiction that can be productive for anyone trying to understand the Viking mind.

These themes and connections can be pursued in the study of graves. Archaeologists determine the sex of the buried dead through analysis of their bones (which is reliable, though not certain) or DNA (which uses a chromosomal definition that is generally uncontroversial). However, in many cases the deceased were cremated, or preservation conditions in the soil are unfavorable to the survival of bone in any state. In these cases, for centuries, archaeologists have resorted to determining the sex of the dead through association with supposedly gendered objects—weapons in a grave are held to suggest a man, jewellery sets denote a woman, and so on.

Beyond the obvious problems of conflating sex and gender, and also effectively sexing metal, these readings risk simply piling one set of assumptions on another in what forensic decision-makers call a “bias snowball” of cumulatively questionable interpretations.

So, while the majority of these sex/gender/artifact correlations probably do reflect Viking-age reality, not all burials conform to such patterns, and an openness to the exceptions—which we know were there—is vital. Without this, one can never hope to do archaeological justice to the gender spectrum discernible in the medieval texts or compare this with Viking-age empirical reality. More excitingly, the archaeology can turn up evidence for identities and genders that did not make it to the written sources.

The starting point comes in graves with viable bone survival. In such cases, archaeologists occasionally find people buried with objects and clothing that would usually be associated with the opposite sex. These include male skeletons wearing what appear to be dresses of the kind more conventionally buried with women, or with the oval brooches that hold the apron together at the breast, and similar combinations. For burials with female bodies, an equivalent is the presence of weapons in numbers sufficient to plausibly suggest a warrior identity for the dead. At Vivallen in Swedish Härjedalen, there was even a male-bodied person buried according to Sámi rituals, in a Sámi settlement, but wearing conventional Sámi man’s equipment over a Nordic woman’s linen dress, complete with jewellery to match—a crossing of both gender and cultural norms.

The most prominent example to date combines almost all of Viking gender in a single burial, raising more questions than it answers. In a 10th-century chamber grave designated Bj.581 from an urban cemetery at Birka in Sweden, an expensively dressed corpse was buried seated and surrounded by a full weapon set (which is rare), with two riding horses. This truly spectacular burial was excavated in 1878 and has been held up ever since as a type example of a high-status warrior from the mid-900s, a kind of “ultimate Viking” of the time. Bj.581 was published as such in generations of standard works. As part of this interpretative package, the deceased was always assumed to have been a man, because warriors were “obviously” male (conflating sex and gender in the familiar way). In 2011, however, an osteological study suggested the buried person was actually female, and this was confirmed by genomic analysis in 2017—the deceased carried XX chromosomes. The ensuing debate on the apparent “female warrior” of Birka went viral and now convulses Viking studies, in an at-times vituperative discussion that has little to do with women and war but more concerns underlying fault lines of gendered assumption in the discipline and beyond.

In a sense it does not really matter whether the person in the Birka grave was a female-bodied warrior woman or not (though as one of the lead authors in the research team, I firmly believe she was all those things). This person may equally have been transgender, in our terms, or non-binary, or gender fluid. There are other possibilities, too, but the point is that they must all be recognized as possible Viking-Age identities while—crucially—not assuming this must be the case. Not least, in the interpretation of Bj.581, scholars should be careful not to deny the basic agency of women, and their potential to choose one way of life over others; this person does not have to be necessarily different. Furthermore, all these intersections of activity and identity were in themselves deeply gendered—from “warriorhood” to everything else.

Importantly, none of this needed to be fixed and permanent. In the later prose texts, difficult sources though they are, one encounters individuals who change names when they embark upon a new path in life—when certain women become warriors, for example. But only sometimes—there are no universals here, and as ever the medieval sources are problematic, late, ambiguous and uncertain.

While some of their norms can appear rigid, the Scandinavians somehow applied them in ways that also allowed them to be questioned, undermined and contradicted. In many ways and for many years, Viking scholars have been naive and simplistic about their acknowledgement and recognition of gender variation in the later Iron Age. Perhaps Viking-Age people chose and renegotiated their identities every day, much as many of us do. Their ideas about gender went far beyond the binaries of biological sex, as scholars are now beginning to understand. Sadly, we are also only now becoming aware of the privilege that allowed us to overlook this for so long. 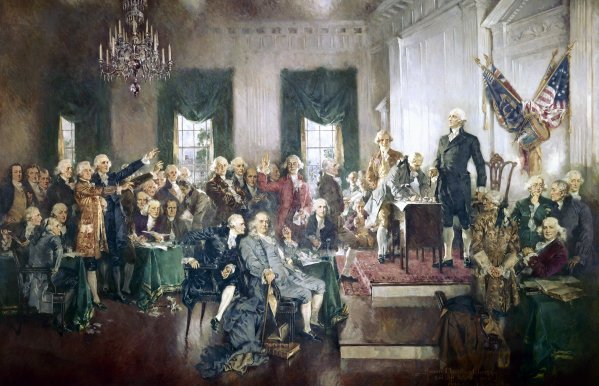 How an Early Postal Service Dispute Put the U.S. Constitution at Risk
Next Up: Editor's Pick