The United States was formed through rebellion against the British empire, but well after the Revolutionary War ended in 1783, resistance to that empire continued to shape America’s history. The civil rights movement, for instance, was not only deeply influenced by the thought and practices of the Indian anticolonial movement, but it was also part of a wider antiracist struggle in the era of decolonization that connected activists across Asia, Africa and beyond, mobilizing the global diasporas of Asians and Africans that colonialism had created.

Those diasporas extended to the United States. The British shipped enslaved Africans to the Americas starting in the 17th century. Indians were also in the United States from the start, such as the Bengali woman Mary Emmons, who was Aaron Burr’s servant and mother of two of his children. More Indians, many of them refugees from colonialism, arrived from the 19th century.

And so, freedom struggles abroad merged with the struggles of people of color in the United States. If Martin Luther King Jr. was inspired by Mohandas K. Gandhi, Indian anticolonial activists in the United States, like Lala Lajpat Rai, found inspiration in the Black struggle there from the early 20th century.

These intertwined histories of displacement and struggle have profoundly affected America’s current political moment. Two of the most powerful politicians in the Democratic Party, Barack Obama and Kamala Harris, are the product of families shaped by the global anticolonial and antiracial optimism of the 1960s, by the bonds of progressive young people around the globe who attempted to make new kinds of societies at a moment in which empire seemed to be completing the process of disintegration that had begun in 1776. As Kamala Harris vies for the Vice Presidency, a complete recounting of her formation requires recognizing her as both a quintessentially American politician—because of, not despite, her being a child of immigrants—and part of a global story of the former British empire.

For Obama, that story goes back to colonial Kenya. His grandfather, serving with British regiments there, saw much of the British empire, including South Asia, during World War II. In the 1950s, he was detained for six traumatic months in the brutal camps the British established to crush anticolonial rebellion in Kenya. His son, the senior Barack, was arrested and jailed for his anticolonial involvement at the age of 20, before coming to the U.S. for university in 1959, on the eve of Kenya’s independence, to study economics. Economics, specifically development economics, was the discipline of the decade for the leaders of the emerging “Third World.” Questioning the theoretical assumptions that had justified colonialism, they strove to remake the discipline for the postcolonial era. With its technical power, they hoped to unleash the progress that colonialism had stifled in their nations.

President Obama’s moving memoir Dreams From My Father recounts his visit to Kenya in 1988, where he realized how profoundly colonialism had shaped his grandfather’s and his father’s lives, including his father’s blind faith in Western technocracy. In fact, the future president concluded, progress depended on “faith in other people.” He saw his work as a community organizer in Chicago as a continuation of his Kenyan forefathers’ struggle for freedom. Equality in America was, to him, part of global anticolonial struggle.

Obama also encountered Indians in Kenya, where, as in many African colonies, they had been brought by the British as indentured workers. When his relatives criticized the community’s seeming disloyalty to Kenya, Obama reassured them with stories of South Asian solidarity with Black struggle in the United States. Alongside the history of Indian anti-Blackness is this history of antiracist solidarity. Thus, after the predominantly white-settler government of another British African colony, Southern Rhodesia (now Zimbabwe), unilaterally declared independence in 1965, the Indian government deputed P.V. Gopalan to newly independent Zambia (formerly Northern Rhodesia) to help its government cope with the resulting regional refugee crisis.

In 1969, his 5-year-old granddaughter visited him there; that granddaughter was Kamala Harris. In India, Gopalan, like Obama’s grandfather, had begun his career working for the British colonial government. According to his granddaughter, he participated in the Indian freedom struggle and frequently talked to her of the importance of civil rights and equality.

Kamala had come to Zambia with her parents. Her father, Donald Harris, had been born in another British colony, Jamaica, in 1938, a year of massive anticolonial rioting. There, too, people of Indian and African heritage lived together: after slavery ended in the 1830s, the British shipped in Indian indentured labor to work the plantations. A year before Jamaica’s independence in 1962, Donald arrived in the United States aiming for a PhD at U.C. Berkeley—in, again, economics, to foster his newly freed country’s growth. There he met a PhD student in endocrinology, Shyamala Gopalan, through common involvement in the civil rights movement on campus; their daughter Kamala also became part of that history as a young girl bussed to school for desegregation.

The common outlines of these family stories reveal the broader, historical forces that made these two influential figures, Obama and Harris, possible: parents daring to alter their societies in the early ’60s by overturning colonial-era hierarchies. Global history has shaped this national historical moment in which Kamala Harris, a woman of Black and Indian heritage, is the Democratic nominee for Vice President. The dividends of past progressivism continue to be paid out today.

Recognizing the way anticolonial bonds forged in the British empire have shaped our Democratic Party leadership can combat pernicious falsehoods. Those who ignorantly question the American-ness of Obama’s and Harris’s Blackness must contend with the fact that African-American, Caribbean, African and Asian struggles and experiences have always informed one another. The British empire shaped the birth of the United States, and continued to shape its struggle to fulfill the promise of freedom.

Certainly, Obama and Harris are no radical Leftists, whatever their anticolonial inheritance. And yet, they show us that however Left the Democratic Party is today, it has much to do with the way in which the struggle for equality in the United States has been shaped by allied global struggles. After all, the forces of inequality—capitalism, imperialism, slavery—are themselves global, too.

Priya Satia is Raymond A. Spruance Professor of International History and Professor of History at Stanford University and the author of Empire of Guns: The Violent Making of the Industrial Revolution and the forthcoming Time’s Monster: How History Makes History. 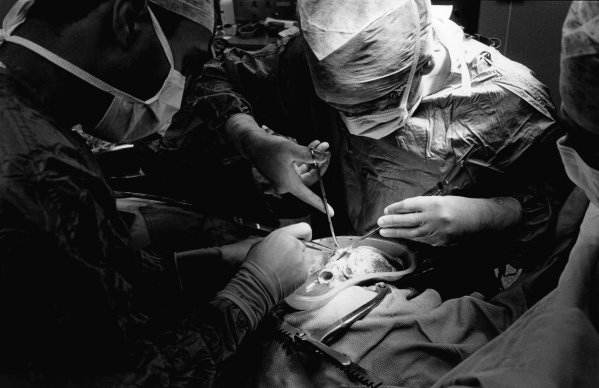 The Harsh Truth on Race, Health and a 1968 Heart Transplant
Next Up: Editor's Pick