Voters drop their ballot at the drop box at Broward County Supervisor of Election Headquarters in Lauderhill, Florida, on Aug. 18, 2020.
JLN Photography/Shutterstock
By Philip Elliott

By and large, most of the Black electorate is behind Joe Biden’s nomination as the Democratic Party’s presidential pick, according to the polls. But there is a sizable slice of those voters who are less enthusiastic about the former V.P.’s candidacy than others: those under 30.

That’s according to research out of American University’s Swing Black Voter Project, an ongoing effort looking at voting trends in six battleground states with large Black populations. In surveys and follow-up focus groups, researchers are trying to understand the hows and whys of Black voters’ patterns. The early data suggests Black voters under the age of 30 are not only lukewarm on Biden, but they are less willing to see President Donald Trump as a racist, are more open to a second Trump term and — like many young people across the country — are distrustful of institutions that are the cornerstones of our society.

“They are easily disillusioned and disengaged. That’s universal to youth,” says Sam Fulwood III, a fellow in the Center for Congressional and Presidential Studies at American University. “Young African Americans don’t have confidence that the system will or can function in a way that will advantage their lives. They have no evidence — or little evidence — that the system will improve their lives. When they engage with the system, more often than not, it is adverse. In some ways, it is destructive and life-threatening to them. As a result of that, they have little inclination to engage with that system.”

Put another way: young Black voters opt out of a system they see is rigged, if not openly hostile. Joe Biden, who has been in national politics for decades, is the embodiment of that system. And if they maintain those views, Black non-voters under the age of 30 may well decide whether Trump wins a second term this fall. It’s why the American University scholars are continuing their research with an eye on this specific subset.

All of which is why Biden’s selection of Sen. Kamala Harris as his running mate was politically sound. As the first Black woman on a national ticket and the first Asian American, too, all eyes will be on Harris when she takes the virtual stage tonight for the Democrats’ convention. Her roll-out last week was about as flawless as one could be during a pandemic that has sidelined traditional campaigning. Polls show Biden has since enjoyed a bump among Black voters.

“The black turnout now is going to be bigger than it would have been before,” says Fulwood, a former journalist who won a Pulitzer Prize for his coverage of Los Angeles’ 1992 riots. As early evidence of this, a Morning Consult/ Politico flash-poll conducted after Harris was announced found 80% of Black voters saying they were “proud” of the pick and 82% saying they were “hopeful.”

Among the younger voters, however, the numbers are less decisive. In an American University survey taken before the Harris announcement, only 47% of Black voters under 30 said they would vote for Biden. Among the remainder, about half said they would swing their support to Biden if he picked a Black running mate. That translated to 73% of these younger voters saying they would back Biden if he partnered with a Black running mate — not bad, but a far cry from the 81% in the 30-to-59 window and the 92% ages 60 and older. (This matched the post-announcement polling from Morning Consult/ Politico, in which 58% of Black voters were more likely to support Biden with Harris on the ticket. That survey did not break down Black voters by age in the way American’s did.)

And before you start to wonder if that’s a big enough group to make an actual difference, remember this: Hillary Clinton lost the Electoral College by only around 77,000 votes spread across Pennsylvania, Michigan and Wisconsin.

Focus groups indicate a few reasons for the indifference to Biden among younger Black voters. For one, younger voters feel Democrats have taken their support for granted, as evidenced when Biden jokingly said anyone who would vote for Trump “ain’t Black.” These younger voters have less of an affinity with the Democratic Party that worked to guarantee older generations’ rights, which are now seen as obvious. The history-making Barack Obama-Joe Biden ticket of 2008 is old news for these younger voters. And there’s a quiet conservatism among some young Black voters on issues of same-sex marriage and abortion rights.

There’s also more than a little curiosity about Trump. “The vast majority of them aren’t going to vote for him and think he’s a racist. But about 30% of our respondents under 30 — and a higher percentage of men — like the way Trump projects strength and defies the Establishment,” says David C. Barker, a government professor at American University and director of its Center for Congressional and Presidential Studies.

The Biden-Harris ticket needs to give Black voters under the age of 30 a reason to show up. Harris herself has a chance to make that case in a few hours. 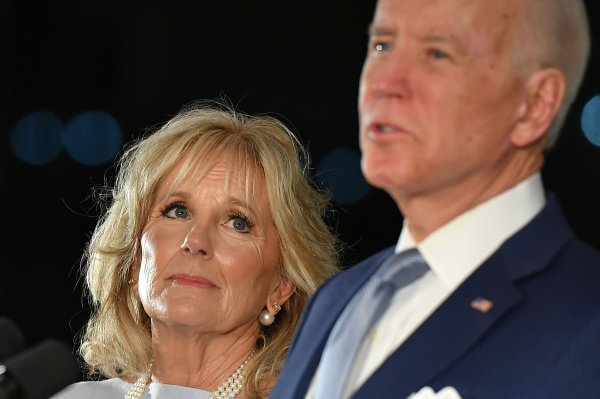 Jill Biden Steps Onto Stage As a Potential First Lady
Next Up: Editor's Pick