As millions of Americans consider casting their vote this November, they’re confronted by an abject failure of presidential leadership. Rather than taking the lead in resolving the manageable challenges of voting in a pandemic, President Trump has decided to stoke fears of an illegitimate election. Large majorities of Republicans now indicate that they distrust the vote count, and this wholesale loss of confidence creates a real concern. Only a clearly-decisive victory by one candidate or the other can avoid casting into doubt the legitimacy of the election and – in an extreme scenario – the orderly transfer of American power.

First, let’s cut through one of the core public concerns about the mail-in vote. At present – even while it faces financial difficulties – the USPS has the money and capacity to handle the surge of mail-in ballots in November. Writing in The Atlantic, Russell Berman provided invaluable context. “The Postal Service processes nearly 500 million pieces of mail every day, and it annually handles more than 3 billion pieces in the week before Christmas alone.”

By contrast, even if every American voted by mail, the total volume – over the course of the entire election season – wouldn’t top 150 million ballots. “None of the experts” Berman spoke with “doubted that the Postal Service could handle a vote-by-mail election.”

This doesn’t mean there aren’t some valid worries, however, that the USPS isn’t performing as efficiently as it should. New cost-cutting measures designed to limit “late trips and extra trips” and reported limits on overtime may delay mail delivery in some instances. The Washington Post, for example, obtained a July 10, 2020 memorandum to USPS employees implementing procedures that could “temporarily” leave “mail left behind or mail on the workroom floor or docks.”

But concerned voters shouldn’t focus only on the Post Office. While multiple states – including Oregon, Washington, Utah, and Colorado – have been conducting elections by mail for years, with few material problems, it’s also true that states unaccustomed to mail-in elections have struggled during this primary season.

New York is perhaps the chief culprit. New York City officials rejected an astounding 1 in 5 ballots in the state’s primary election earlier this summer. Problems in counting the votes delayed election results in some key contested races for more than a month. Thousands of votes may have been wrongly disqualified because of a factor beyond he voter’s control – the lack of a postmark.

Kentucky’s primary was also marred by a large number of ballot rejections. Election officials rejected 15,000 absentee ballots from the state’s two most populous counties, with reasons ranging from missing signatures, to unsealed envelopes, or because the ballots missed an “inner envelope flap.”

These problems, however, are solvable. The Post Office has the capacity to handle the vote, state officials have had a primary process to learn lessons, and we still have more than two months to conduct comprehensive voter education programs (including communicating Dr. Anthony Fauci’s advice that in-person voting, with proper social distancing, is safe).

But rather than publicly leading the necessary national mobilization, Trump is actively undermining the effort.

“They need that money in order to have the Post Office work so it can take all of these millions and millions of ballots,” Trump said. “But if they don’t get those two items, that means you can’t have universal mail-in voting because they’re not equipped to have it.”

These words came after weeks of tweets and remarks disparaging mail-in voting and raising the specter of systematic voter fraud.

Trump’s public campaign is bearing bitter fruit. Even before the president indicated he’d deny additional funding to the Post Office, an NBC/Wall Street Journal poll conducted between August 9th and 12th demonstrated that confidence in election integrity had shifted significantly since 2016. Now only 45 percent of voters are confident in the 2020 vote count, down 14 points from the previous presidential election. Only 44 percent of voters believe mailed votes will be counted correctly.

Let’s be very clear about the risk. If the race results in a narrow loss for President Trump, there is now every indication – from the president’s own words to the expressed beliefs of his supporters – that neither the president nor the base of his party will believe that result to be legitimate, the result of a free and fair count.

Since the NBC/Wall Street Journal poll also indicates that Trump’s supporters have said they’re more likely to vote in-person than Biden voters, a close election could easily lead to a nightmare scenario. After a strong in-person vote on election day, Trump declares victory. That margin may well narrow or even disappear as mail-in votes are counted, yet, as noted above, only a small fraction of Republicans have expressed confidence in the mail-in count. Expect that number to decrease even more in the heat of electoral conflict.

At best, the result would be an electoral crisis much like the extended drama of the 2000 election, but against the backdrop of far greater polarization and with a president far more prone to stoke conflict. At worst, widespread distrust, fear, and paranoia would place at risk one of the core foundations of our democracy – the orderly transfer of power.

Once again, President Trump faces a looming national challenge. Once again, he has chosen to double down on division and protect his partisan interests rather than accept his role as the president of all Americans. Never forget former secretary of defense James Mattis’s warning, published this June: “Donald Trump is the first president in my lifetime who does not try to unite the American people—does not even pretend to try.”

Division is the one thing that Trump has proven he excels at. Our nation’s response to the pandemic lags behind the vast majority of the world, our economy falters, and multiple cities still struggle – months after George Floyd’s death – with persistent, violent unrest. But while Trump fails to govern, he succeeds at setting neighbor versus neighbor, and the most bitter political and constitutional consequences of his pugilistic partisanship may be yet to come. 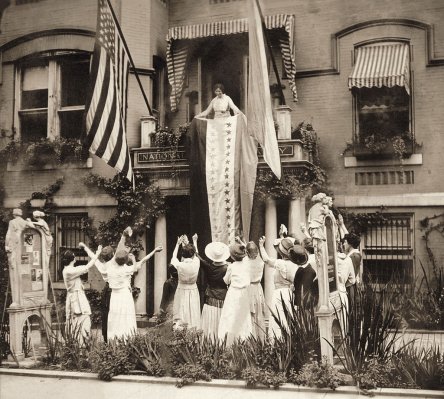 5 Myths About the 19th Amendment, Debunked
Next Up: Editor's Pick