A small group of student activists from Pace University hold a rally against sexual violence after walking out of their classes on the campus of Pace University, on April 19, 2018 in New York City.
Drew Angerer—Getty Images
Ideas
By Nicole Bedera , Seth Galanter and Sage Carson
Bedera is a doctoral candidate at the University of Michigan in the Sociology Department.
Galanter is a Senior Director of Legal Advocacy at the National Center for Youth Law and former Acting Assistant Secretary in the Department of Education’s Office for Civil Rights.
Carson is the manager of Know Your IX, a youth- and survivor-led program that aims to empower students to end gender violence in their schools.

A mere three months after its release, the DeVos administration’s new Title IX rule goes into effect on Friday, August 14. With the rushed timeline and higher education’s focus on restructuring academia as a whole during the pandemic, scholars, activists, administrators, and other experts are still attempting to parse the nuances of the 2,033 page document. Amid the chaos, there is one provision that has largely avoided scrutiny, but that stands to make Title IX cases all but impossible for survivors to win: the DeVos administration gave perpetrators of sexual assault a blueprint to block damning evidence against them. In that way, the new regulation institutionalizes gender-based discrimination and creates campuses where sexual violence is not only tolerated, but more likely.

This might not come as a surprise to anyone who has followed the administration’s logic for the new regulations. They have argued that the pendulum of justice has swung too far in the direction of survivors’ rights, requiring new due process protections for the accused. Due process, at its core, is about seeking the truth to ensure no one is unfairly deprived of their right to liberty or property. That includes encouraging all relevant evidence to ensure that our justice processes are, in fact, just. Hiding evidence has no place in a regulation allegedly put in place to protect the legitimacy of investigations and ensure a fair process for all parties.

And yet, it is precisely what the DeVos administration has allowed.

The ramifications of this change for survivors are obvious and devastating. It ensures that any survivor who wants their case to move forward will have to undergo live cross-examination, no matter how traumatic they might find it. Otherwise, everything from their rape kit to a text exchange with a friend about the event to the original report itself will be thrown out as inadmissible. It is also easy to imagine a perpetrator or their supporters intimidating victims into silence. Even before these provisions have gone into place, most victims of gender-based discrimination face some kind of retaliation for coming forward. The new rules all but guarantee that will continue. Fear of either outcome—a traumatic live cross-examination or retaliation—will likely scare many victims away from reporting altogether. In fact, the new regulation explicitly reminds survivors who take issue with the rule that they may always choose not to report.

While the new regulation harms survivors, it offers a clear advantage to the accused.

The reality is that perpetrators rarely make statements that can absolve them of wrongdoing. In the absence of a clear alibi, perpetrators usually offer interpretations of events—most commonly, that they considered an interaction consensual. It’s more an argument than evidence and it’s an argument that can come out many other ways during a sexual misconduct hearing. To put it another way, perpetrators who refuse to undergo cross-examination probably aren’t missing out by losing access to their own statements as evidence. That alone makes this provision unfair.

Even worse, though, is that perpetrators’ relevant statements are often confessions. Under the new rule, perpetrators can now keep their confessions off the record to strengthen their cases. In fact, the regulation specifically states that perpetrators may strategically opt out of cross-examination as a way to block damaging evidence. It also prohibits universities from drawing any negative inference from a party’s refusal to testify.

To make it more tangible, consider the following example. Samantha accuses Alex of sexual assault under their university’s formal Title IX process. Alex refuses to testify, which means that Samantha can’t mention that after she told him not to touch her, Alex replied with, “I don’t care what you want.” Samantha has a text message in which Alex admits he raped her and apologized, but Samantha can’t bring that into the hearing as evidence either. The university police department also has a recording of Alex confessing to the sexual assault during a phone call, but that can’t be used. Alex’s best friend was willing to testify that Alex had bragged about raping Samantha in front of a group of their friends—that’s out too.

Alex’s decision not to testify excludes any evidence that includes any statement he made, regardless of its reliability or relevance.

The rule is so absurd that, as originally written, the DeVos administration had effectively barred victims of verbal sexual harassment from being able to repeat the inappropriate statements they had reported. Since vulgar jokes and sexual advances in a workplace are comprised of words uttered by the accused, they could not have been said aloud by anyone in the hearing for consideration as evidence. Even the DeVos administration had to admit that this potential interpretation of the regulation had gone too far. The Department of Education released a blog to make an exception to the regulation when the statement that’s made is harassment itself, rather than evidence that harassment took place. Still, this oversight by the administration is telling—they had such a single-minded focus on protecting perpetrators that they had effectively legalized verbal sexual harassment.

Once again, this is also a massive departure from legal precedent. In no other court in the land can the accused keep their self-incriminating statements out of evidence by refusing to testify.

Despite the DeVos administration’s rhetoric around due process and fairness, there is nothing fair about this regulation. And that’s even more egregious when the law in question—Title IX—is intended to promote equality on campus. Instead of fulfilling its goal to protect students from the threat of sexual violence, the new regulation makes it easy for perpetrators to rape without consequence and forces their victims to bear the cost. 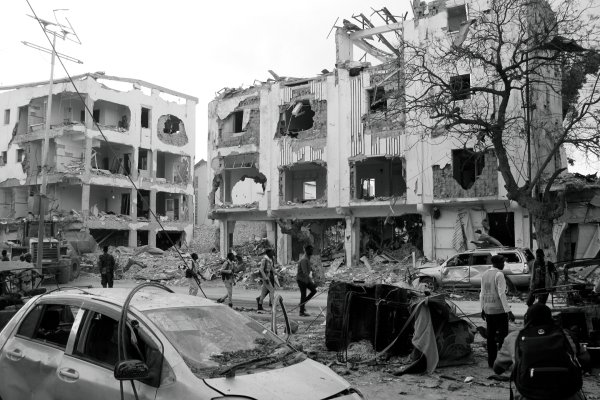 The Civilian Toll from U.S. Strikes in Somalia
Next Up: Editor's Pick